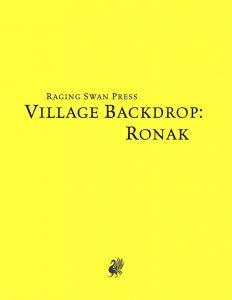 Ronak is a dwarven company’s trade-outpost – or rather, it was. The company has gone belly-up ages ago, leaving the ancestors of the Ronakee stranded in the middle of the swamplands, on lands that once belonged to lizardfolk, dutifully exterminated by the dwarves. This can be unearthed via the village lore provided in the tradition of the series…and it kinda is weird. Why? Because the very first sentence on Ronak is “Nobody knows Ronak exists. Or, more precisely, nobody remembers.” Considering that baseline, the fact that there is lore to be unearthed about it in the first place, to me, is weird. (Not as weird as in the more rules-intense systems, since the referee retains control…but yeah…)

Anyways, the dwarves of Ronak are insular, yes – and they are, to a degree, forsaken by civilization. You see, the ronakee dwarves no longer truly believe in outside civilization; they are guided by the spirits of the lizardfolk they slaughtered, slowly becoming ever more degenerate, savage…and, most disconcertingly, reptilian. This slow change is also represented in the way in which the whispers and rumors and map are depicted – we have a fortified village of huts on a hill; the villagers are isolated and their demeanor and appearance reflect that; the marketplace section provided also focuses on more shamanistic aspects. Kudos: The magic items have been reduced and properly adjusted to an old-school aesthetic!

Similarly, the classes of the movers and shakers of the village adhere to the more primitive bent and have been properly codified within the classic class ranges; the drug used to communicate with spirits, sawleaf, which is harvested in the bitter bog also makes for a nice piece of properly translated crunch. The scaled dwarves of Ronak btw. get a racial variant – and here, the old-school mostly system neutral version of the pdf deserves once again special applause: The rules presented are concise, the wording is clear and the mutations make sense. Maximum levels etc. are included. Oh, and btw., descending AC is assumed.

From the temple to the humble spirithouse, the village itself is pretty neat – though it should be noted that no event-table is provided this time around – instead, we get a bit of consideration regarding the event that changes all: The arrival of PCs. Much like insular tribes in real life, the arrival of PCs must be seen as a cataclysmic upheaval for the village and its societies…and the repercussions you can weave there are most assuredly really exciting.

Editing and formatting are very good, I noticed no serious hiccups. Layout adheres to RagingS wan Press’ elegant two-column b/w-standard and the pdf sports solid b/w-artwork and great b/w-cartography, this time around provided by Maciej Zagorski. The pdf comes in two versions – one optimized for screen-use and one for the printer. The pdf is properly bookmarked for your convenience.

Jeff Gomez’ set-up here is really interesting. I like the idea of colonialists succumbing to their own sins; there is a definite Heart of Darkness-vibe going on here; similarly, the angle regarding the destructive force of contacts with advanced civilizations is something I really enjoyed. And yet, Ronak didn’t 100% click with me; perhaps it’s the scaled dwarf-angle (seen that before); perhaps it’s the mutation factor…or that it doesn’t go full-blown either Chinua Achebe or Joseph Conrad with the colonialist angle…This is, don’t get me wrong, a pretty inspiring village (though the low lore DC makes no sense to me), but it is a village with a concept that could have carried a more forceful execution or a stranger transition. The concepts underlying the premise are so strong, they could have yielded simply more. That being said, the system neutral version goes above and beyond to retain and translate all the cool small tidbits and, frankly, they imho work better in this iteration than in, for example, PFRPG. This nets this version +0.5 stars, for a final verdict of 4.5 stars, and I’ll round that up due to in dubio pro reo.