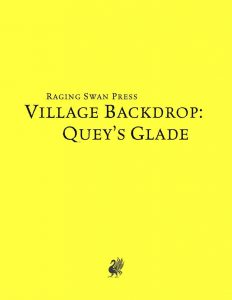 As always, the dressing habits of villagers and notes on village lore can be found for PCs of a more scholarly bent; for PCs seeking to socialize, there are 6 different whispers and rumors to encounter. It should also be noted that we get a fully fleshed out market-place section, properly adjusted to OSR-style systems.

There is another aspect to this sanctuary: As progress marches on and fell entities are deprived of their prey, the places where Quey’s Glade may draw upon are slowly diminished, one by one. Then again, this place in wondrous in the best of ways: Have I mentioned the sentient porcupine fighter? Nice plus for fans of older games: Rogue has been properly adjusted to instead pertain to the thief class, etc. – nomenclature is concise.

While the system neutral version obviously lacks the massive rules-synergy that e.g. Pathfinder offers, it does have its appeal – namely, that it taps into the OSR’s tradition of weird geographies, of strange places, and acts as a relatively low-impact hub to connect all manner of strange places.

Even in the ridiculously amazing Village Backdrop-series, this is an outstanding offering, one that loses nothing in its system-neutral version. My final verdict will be 5 stars + seal of approval, given sans hesitation.