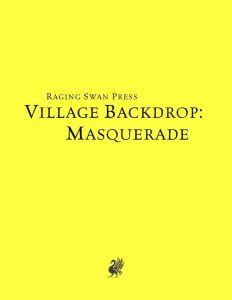 Tragedy and comedy entwine with one another in an intricate manner, for Masquerade’s founder, the enigmatic Silent Queen and absentee captain Absinthe Morell (take a look at that name and the connotations it automatically causes!) created this place as an exile and trap of sorts…but in a twist on trope, the place has become something more for her, a family of outcasts of sorts…and thus, she has taken on an oath that requires nigh-unparalleled willpower to maintain…but whether she can maintain it and for how long…only the referee decides.

Indeed, while Richard Pett has a knack for writing great locales, the extended cadre of characters herein deserves special mention – no less than 9 sample NPCs with potentially complex motivations can act as a foil or allies for the PCs and include some intriguing angles, with the theme of the masquerade itself obviously acting as a good reason to not provide read-aloud texts for their looks. In system neutral version, their references obviously have been changed appropriately to the respective old-school monikers and classes.

An alternate angle for adventuring would be the fact that the troupe does regularly try to cure its members via magic when funds allow for it, but this also, to a degree, represents a parting of sorts, adding a bittersweet flair to the whole proceedings, something that ultimately suffuses the whole cast of characters – this place’s inhabitants are as multi-faceted as the masks and gowns they wear are outlandish and colorful. Big kudos: The magical healing of the afflicted has been converted to refer to the proper old-school spell.

Indeed, one can obviously use this village just as well as a take on the trope of normals vs. “freaks”; one could run it in a vast plethora of ways, and indeed, we do get some suggestions on how to adventure in masquerade. Oh lord, I just made a formatting-based joke. Sorry, that’s a new low for me. Anyways, it should also be noted that, yes, we do get a list of 20 entries of village dressing and events, and the system neutral version has been modified regarding prices of goods etc. to reflect the different realities of the system; however, there is one minor complaint here: The settlement has a global effect regarding its effects on magic, which is pretty minor in PFRPG; in the old-school system neutral version, I personally would have gone a step beyond. It’s a matter of aesthetics in this version, though, and not a complaint versus the integrity of the effect.

This book is very much an act of deliberate craftsmanship and wordsmithing, and thus manages to stand apart from favorites of mine and benchmarks, be that Ravenloft’s Carnival, the phenomenal Blood Bayou, or Nick Logue’s grisly fey carnival. Masquerade, in spite of having chosen perhaps one area in RPGs where absolutely superb supplements abound, manages to carve out its niche as a truly remarkable place; indeed, it almost feels like a village that could carry a whole series of novels…or, well. Adventures. The characters and general location are immensely captivating, rendering this a masterpiece, even within the context of the extremely high level of the Village Backdrop-series, rivaled only by some of John Bennett and Mike Welham’s legendary contributions. Even in master Pett’s impressive catalogue, this stands out in its achievement of this level of depth so in so few pages.

This humble supplement set my mind ablaze with ideas and managed to really touch my heart…and considering that it’s only 7 pages long, that means something. This pdf thus gets 5 stars + seal of approval. The system neutral version is just as strong as the PFRPG-version in its overall themes and execution, and thus shares its nomination for my Top Ten of 2018.

You can get this great supplement here on OBS!