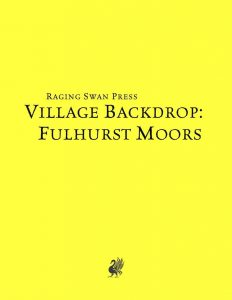 What once was a lush forest inhabited by brutal savages, is now a desolate windswept moor where the waters of Blackraven Creek burrow into the acidic, infertile soil. Haunted by will-o’-wisps attracted in times long gone by, the plain is now home to peat-diggers – a harsh folk that reflects the unpleasant environment they live in. The anxiety of the populace is almost palpable, as the locals await a doom most dire.

Unbeknownst to them, one greedy individual has struck a pact with the dread will-o’-wisps and the resulting tragedies have not managed to warm the local folks to strangers… It should be noted that this version sports a properly modified marketplace section of minor magic items to get.

Beyond brief notes on the diverse population that includes the best and worst of people, we have the usual 3 village lore entries that players doing their legwork can unearth. Speaking of the NPCs, and since some of my readers are consider that a pet-peeve: Nomenclature-wise, some characters are referred to by names like “rogue” and “wizard” instead of “thief” or “magic-user.”

Beyond these, we also get a write-up of local appearances, dressing habits and nomenclature, we also get the traditional 6 whispers and rumors. Similarly, no less than 6 different events can be used by the GM to establish the proper mood. Big kudos: The special moonshine that is sold in town comes with proper effects tailored to old-school gameplay – kudos!

Now, in Pathfinder, we got a sample statblock – in the system neutral version, we instead gain something I actually prefer: A massive ½-page table depicting uncommon will-o’-wisps. These creatures are no less deadly than their common brethren, but they seem to prefer a more…specialized diet…like folks that drowned, that became insane, etc. – each of these sample wisps comes with a brief, fluff-only entry that makes each of them a great potential antagonist for an investigation…and if you combine them, you can challenge even experienced players! Now, in the system-neutral version, it would have been nice to get some slightly different suggestions when compared to 5e, since the rules-lighter games tend to e.g. not differentiate between damage types, or at least, to a lesser degree, but that is me nitpicking at a high level.

Editing and formatting are top-notch, I didn’t notice any glitches. Layout adheres to RSP’s superb, streamlined and printer-friendly 2-column b/w-standard. The pdf’s b/w-cartography is just as awesome as I’ve come to expect from the series. The pdf comes fully bookmarked and in two versions, one optimized for screen-use and one to be printed out.

Okay, my first impression was “Oh yeah, another swamp/moor”-village – but know what? This is VERY distinct from anything you’d expect in a SWAMP. While Jacob Trier’s village works with the tropes, it also subverts them -no degenerate fish-people, no voodoo cults, no looming lizard-men, instead painting a picture of a village of hard-working people that cover the broad experience of humanity and morality, suffering from a climate of fear invoked by some vile individuals. Fulhurst Moors may not be a nice place at first glance, but it can be the town where, once the loyalty of the populace is earned, the evil rooted out, PCs may find haven even if hunted by the king. Remote and believable, with a rich history to develop and hooks galore, Jacob Trier’s village is great. Jeff Gomez’ additional design has made sure that the system neutral version is very much worth getting, in spite of my nitpicks. My final verdict for this version will hence clock in at 5 stars, just short of my seal of approval.