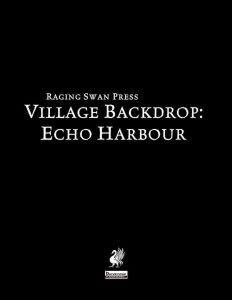 Still, for now, as a glance at the PFRPG settlement stats should show, the village remains relatively safe. Following the evolved village backdrop-formula, we get a generic marketplace section denoting items for sale, an entry on villager appearance and nomenclature as well as some village lore for PCs to unearth. 6 different whispers and rumors can also be found to add some spice to the experience.

Now, the pdf also contains a total of 7 notable points of interest and 5 different NPCs. The NPCs, as always, focus on a fluffy, statless depiction, with mannerism, personality and distinguishing features noted. Both the NPCs and the locations do feature their own read-aloud text for your convenience. As following the expanded formula of the series, the pdf also features one single, brief and localized table of events for the marketplace of the town, notes on food and drink in the local tavern, and we get notes on the kelp farms, the cave where Echo Harbour was founded as well as on the local shipyards. One of the locations also has two small quest-hooks suggested.

You see, Echo harbor acts as a perfect hub and transition axis – the village’s trade connections can explain getting the exotic goods PCs are known to like, and its location allows it to act as a hub and transition point from in-land adventuring to naval or underwater adventuring and vice versa, acting as a great starting point for a change of pace. This makes the village rather valuable for longer campaigns that cherish changes of scenery. Hence, my final verdict will clock in at 5 stars – very much worth getting!