From the Vats (OSR)

From the Vats (OSR) 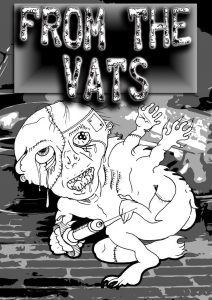 This FREE pdf (the print copy costs a measly $3.00 for at-cost printing!) clocks in at 54 pages, 1 page front cover, 1 page editorial, 1 page ToC/foreword, 2 pages of SRD, leaving us with 49 pages of content – though, as most of the time for OSR-supplements, the file is formatted for a 6’’ by 9’’-standard, which means you can try to fit up to 4 pages of content on a sheet of paper when printing this. Personally, I consider the super low price for print to be well worth it – my review is mostly based on the softcover print edition of this supplement.

Okay, first things first – this is basically a compilation of community-created content inspired the phenomenal “The Complete Vivimancer”-file, penned by Gavin Norman. The basic idea of this specialist, in case you don’t want to search for my review, is that of a mad, magical scientist who uses the forces of life and bends them to their will, adding a thoroughly unique and amazing feeling to any setting that employs it – so much so that I honestly consider the amount of work that conversion requires to new-school systems be well worth it. This is very unique and cool.

Gusing aside, what can be found within this book? Well, while we begin with adventures, I will first take a look at the parts of the book that do not require a warning. These pieces of content would be, obviously, new spells – 6 are included, and all but one are penned by the author of the vivimancer, guaranteeing the crisp and precise rules-language that made me love the original…and they are damn cool. As in “Inspired me to make a whole dungeon”-level-cool. Cellular automaton lets you grow muscles and bones and brains to handle those pesky tasks and calculations: Fleshy drawbridges and elevators, brains used as icky computers – this spell alone has vast potential for exceedingly cool uses. Transmuting targets into plant matter or creating mini-me style miniature clones also rocks…and on the offensive side, two spells allow vivimancers to literally shed their skin and “pilot” it in various capacities. Yeah. Icky. Yeah, you won’t want to be caught with your pants…eh, I mean skin, down. Ben Laurence’s high-level spell is just as twisted and delightfully icky, btw.: Create Organ Golem comes in two variants – one makes a golem out of the cardiovascular system of beings (EW!), while the other kills subjects in a slow (but hey, totally humane and painless!) procedure, fusing their nervous systems into a golem that’s growing out of their skulls as the bodies wither. Yes, SUPER-EW, but also damn amazing and really vivimancer-style amoral!

Ben Laurence has btw. also penned a significant part of the new magic items featured herein, from the deadly blackseed poison (think: thorny thing grows inside you and kills you) to flesh softener (guess what that does) and lung eels (!!), these are pretty neat indeed. Derek Holland presents a whole item-class for us, one based on the vivimancer’s spark of life spell – these items are called clothlife and come as capes, ropes, scrolls, tents, nooses…and more… Vance Atkins provides two items as well – the pretty scuttle-pot that can be commanded to create biting insects, acid, fresh water, slippery ooze or worse. In a minor complaint, rules-language is not perfect here. The vat of amphibious horrors, his second creation, can be used to spawn 4d4 creatures of one of 4 weird and delightfully strange amphibious critters, from pustule toads to bleeding caecilians.

Beyond these, the authors, as you could glean from the aforementioned golems mentioned among the spells, have also provided an array of new monsters for your perusal – 25 of them, to be precise. Here, we have transparent apparition shrimps, squirrel/cow-hybrids, ape/dog-creatures, humanoid/spider-blends, fishing elephants that can walk on water (!!), 8-legged, gigantic flying squirrels designed to carry their masters, animated muscle slime, jellyfish drawn to magic, smart hounds, blends of ash and smoke…and some really twisted things. Noah Stevens, for example, introduces the succubus crab, which can poison targets…because the species needs others to reproduce.

You fill out the grisly and practically always fatal ramifications there…Christian Sturke’s grotesque Necrohandler, a head sewn onto a hand, makes for an apt way to return a recurring villain in a…let’s say “different” capacity. Anders Hedenbjörk Lager’s body stealers even come with a complete life cycle, a quasi-undead servitor zombie-like variant spawning from being killed by them and detailed notes on the symbiosis as well as stats for different life-cycles. Special mention also to Ben Laurence’s Ctenophoric Maiden, a gorgeous beauty from the nose down…and a strange thing reminiscent of comb jellies above that…possessed of an unnatural intellect, they are uncanny in a really disturbing manner. In a good way.

Now, this is where I’ll take a look at the adventure content, in all due brevity, but still – from here on reign the SPOILERS. Potential players should jump to the conclusion.

So, the pdf provides a pretty detailed adventure seed (as in: takes up a whole page) for the use of body stealers penned by Anders Hedenbjörk Lager, which was a nice read. Alex Schröder introduces a solid one-page adventure focusing on the redoubt of a clone…

…but the big module herein, “The Submerged Spire of Sarpedon the Shaper”, penned by Ben Laurence, is by far the longest section of the pdf, with excellent cartography, no less! (Though, alas, no key-less player-friendly version of the map is included to cut up and use as hand-outs…) This adventure takes place mostly underwater and thus features simple rules for underwater adventuring with old-school systems…but frankly, I consider these to be the weakest part of this book, by far –if you have more detailed or different rules, I’d strongly suggest using them instead.

Anyway, the adventure takes place in a desolate region; contextualization for one campaign setting is included, but frankly, it should be easy to plug and play into any body of water of sufficient size, provided it sports tides)…for at low tide, at the end of crumbling steps ending in the sea, you’ll be able to see the top of a marble down atop the waves – the eponymous spire, once jewel of the shattered isles. The module proceeds to be a rather intriguing underwater exploration of a 32-location long dungeon; sans read-aloud text, but with tons of dynamics: restocking and changes of the dungeon in short- and long run are covered and the place makes for a great blending of a melancholy for ages long past that can quickly turn into horror, with a smorgasbord of vivimantic monstrosities waiting in the wings…and if they don’t manage to manipulate and/or kill the adventurers, then the roaming sahuagin war parties may do the trick…and and operating some of those twisted devices can yield potent benefits, yes…but…you know, it may first need to drill some holes in your skull to directly interface with your brain. Good news: If you survive the detaching process, you’ll grow nifty fleshy membranes over the holes after that! …Have I mentioned that I really like the vivimancer and all the delightfully twisted things that come with it? So yes, this makes for a cool way to introduce some concepts of the class…and even if you don’t use the class (WHY???), this makes for a delightful challenge.

Editing and formatting are very good on a formal and rules-language level, though not as awe-inspiring as in the main-book. Layout adheres to a nice 1-column booklet-b/w-standard and the pdf actually sports really nice b/w-cartography AND some neat artworks – kudos! The map does not come with a player-friendly version, but hey, cool map for zilch! The pdf version is, annoyingly not bookmarked. But come on – the PoD is really cheap. Less than a cup of coffee in many places!

Gavin Norman, Vance Atkins, Seana Davidson, Kelvin Green, Matt Hildenbrand, Derek Holland, Anders Hedenbjörk Lager, Ben Laurence, Gavin Norman, Alex Schröder, Noah Stevens, Christian Sturke and Michael Wenman have created one of my favorite FREE books out there. I mean it. This is a labor of love and it shows – it was penned by people that get what makes the vivimancer cool and delightfully creepy.

We have a great expansion on our hands here, and while not absolutely perfect, I can spend hours upon hours recounting adventures, spells, magic items and monsters that are significantly less imaginative and cost a heck lot more than NOTHING…or even the very, very fair PoD-price. This is a great offering, a must-have for fans of the vivimancer (though it *is* a bit more explicit in tone here and there than the original book) and generally a great expansion that makes me realize how much more vivimancer material I actually want. I mean, how often does a single spell inspire you to design a whole dungeon? Yeah, thought so. This is, in short, a really cool offering for an unbeatable price – and well worth 5 stars + seal of approval.

You can get this cool expansion FOR FREE in pdf and for only $3 in print here on OBS!

You can get the INSPIRING vivimancer-book here on OBS!