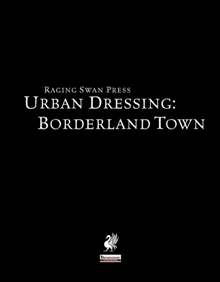 First: What do I mean by “new” Urban Dressing? Well, the first run of the series had a certain hit-and-miss quality; It endeavored to take components of the city and use the Dressing-formula to depict them. Alas, cities are complex and organic and the success not always guaranteed. Then, with a certain pirate town, the series changed – away from describing a single component (like a park/temple etc. and failing to take some moving bit or another into account), instead focusing on a general theme and the means for the DM to evoke this theme. This, then would be the third of.these new Urban Dressings.

We begin our trek through the Borderland Town with a table of sights and sounds one may encounter – spanning two pages and featuring drunken warrior, mercenaries, heads mounted on iron spikes and similar portents of a harsh environment, we have quite an array of great mood set pieces.

The second table sports sample businesses – from inns with great food, but drafty rooms to torchlighter guilds, places for convalescence etc., the 50-entry strong table sports an array of businesses whose very presence in a town may well spark an adventure hook! If you’re like me, you have a couple of key NPCs when designing a town, those you require for a given adventure to work, and then create red herrings and common folk (which you develop later) – well, this pdf takes some of that work off your shoulders, with 50 sample folk in a table, all sporting a cosmetic peculiarity or a special mannerism that helps make them distinct, while also featuring race and suggested level/class in brackets.

Finally, we receive a table of 20 hooks and complications for those times you really had no time whatsoever to prepare anything – alarm bells, providing covert-ops intelligence on the town’s militia or dead soldiers of a neighboring kingdom – there are plenty of different ways to develop each of them.

Josh Vogt’s take on Borderland Towns, at least for me, leaves nothing to be desired – atmospheric, studded with easily implemented, yet never generic (at least in the derogative meaning of the word) entries, this installment of Urban Dressing is extremely useful.

Now, personally, I would have liked to see at times a clearer distinction between borderland themes versus ones that could be applied to frontier’s towns, but that may just be me being terribly nitpicky. This pdf is , useful, fun and well worth a final rating of 5 stars, just short of my seal of approval.

You can get this cool dressing-file here on OBS and here on d20pfsrd.com’s shop!