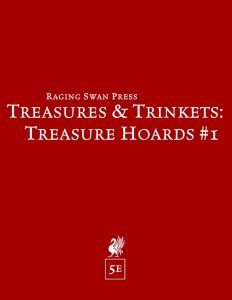 The first of the pdfs in this series clocks in at 11 pages, 1 page front cover, 1 page editorial/ToC, 2 pages of advertisements, 1 page SRD, 1 page back cover, leaving us with 5 pages of content, so let’s take a look!

What is this pdf all about? Well, in short, it provides 25 fully fleshed-out treasure hoards, ready to be dropped in your game, two of which feature no magic items. A handy d%-table lets you randomly determine which treasure hoard to use and the structure of the respective entries is nice: We first get coinage and then the respective entries, which range from jewels to potions, with a few uncommon magic items thrown in for good measure.

In many a case, an Intelligence DC 10 check can determine the value of the more obscure items, like a rare, illustrated children’s book, though harder DCs certainly can be found. Magic item-wise, you will find items here beyond the confines of scrolls and potions: Stones of good luck, eyes of the eagle or driftglobes can provide some nice magical oomph to the beleaguered adventuring group. It should be mentioned that the respective 5e-items have been chosen rather well and that the treasure hoards do feature nice themes…

…but at the same time, the pdf has one big issue: It does not mention for which levels the treasure hoards presented would be appropriate. The pdf mentions challenge 0 – 4 as a general guideline, but personally, I think that is a pretty generous estimate. Considering 5e’s relatively conservative power-level, a over-use of this pdf could, theoretically lead to some serious magic item overload for lower levels. A total value is also not provided for the hoards, which means you have to read up the value of each of the entries, look up the magic items, total them with the coinage…you get the idea. Some precise values (perhaps with a plus and the magic item’s scarcity, if any, added) would have made this significantly more useful, at least to me.

Editing and formatting are top-notch, I noticed no significant glitches. Layout adheres to raging Swan Press’ elegant two-column b/w-standard and the pdf has no artworks, but needs none at this length. It does sport bookmarks for your convenience, though, and also comes in two versions – one optimized for screen-use and one optimized for the printer.

Ronald Calbick, Thomas King and Chad Perrin deliver a nice array of generally evocative treasure hoards herein and in the categories of diversity and imagination, there is not much to complain about. However, the lack of total values and aforementioned handling gripes do limit the usefulness of this pdf, at least for me. By no means a bad book, this pdf does lose its stab at excellence thus. My final verdict will clock in at 3.5 pages, rounded down for the purpose of this platform since the ease of using is the main selling point of hoards like that, at least for me.