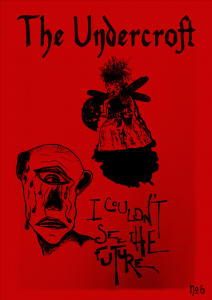 The sixth installment of the Undercroft-‘zine clocks in at 26 pages (laid out in 6‘‘ by 9‘‘/A5) if you ignore the editorial – though I did really enjoy it this time around – the text flows around a medieval image of the Rittertod (Knight’s death), with the text on the left and right of the artwork continuing the previous paragraph independently from each other, only to once again coalesce below – kinda like an alternate timeline in textform. …this made me sound like a pretentious prick, right? Sorry.

Anyhow, rules-wise, the default system intended for this ’zine would be LotFP (Lamentations of the Flame Princess), and, as always, the material can be adapted to other OSR-systems with relative ease. This is a horror/dark fantasy supplement, and as such, reader discretion is advised – if you’re easily offended or triggered, this is your warning. This review is based on the stitch-bound softcover of the ’zine.

Okay, so, the first article (penned by Forrest Aguire) deals with Jonas Ludolf, the celebrated Flemish tapestry cartoonist (XD), who embarked on a trip towards Formosa to learn from the best of Eastern philosophers; of his effects, only the tome known as Ludolf’s Folly remains – a grimoires penned in an opium haze, referencing places like Leng – the storied item is depicted in detail, which is pretty awesome. Content-wise, the book has a genius angle that LotFP, if the company is smart, should take under serious consideration as a new magic system: You see, the book contains various spells you may be familiar with, like divination, detect invisible, wizard’s eye, etc. – you can see a divination focus here, but the exciting thing? Ludolf was in the throes of various drugs and insights while scribbling his notes, which had a dual effect: ANYONE can cast these spells…or at least ATTEMPT to cast them. You roll 1d6, and on a 1 or 2, the spell works…and on higher results? Catastrophic failures. These actually relate to the spells: Take wizard’s eye: A mild failure may end up with you vomiting eyeballs; a more serious one might see you blinded for months, and a really bad failure may see your eyeballs pop from their sockets, with obvious consequences. I love the book’s story, though it primarily makes sense for low-fantasy games; why use a potentially fatal spellbook if you can easily cast a spell? So yeah, the appeal might be slightly limited, but that notwithstanding, I consider this to be pretty much the best suggestion for a global modification of LotFP’s magic system. Having a whole book that provides this treatment to all spells? I’d put down money for that.

Things get weird with Evey Lockhart’s contribution, which provides two unrelated artifacts from other dimensions – these have nothing to do with each other, but their combination can be rather fatal. The unknown disk may be held in place to generate a portal to the strange, overgrown post-apocalyptic jungle-world beyond; the pyramid of flesh is more visceral: It’s what it says on the tin, with each side of the super-quickly regenerating and thus indestructible pyramid sporting a line, a fold, like a mouth or eye pressed close. Turns out, it’s both – the mouth-eyes might open, and contact to flesh will see the pyramid fuse to you, potentially requiring amputation. It also replaces your innards potentially, which can result in vomiting worms and becoming oddly inhuman; attached to the head, it bombards you with secrets. ALL THE TIME. What your childhood crush thought about you, what someone did – no rhyme or reason, all the knowledge of the cosmos, but no filter. If the pyramid is inserted on the disk, things go horribly wrong – the first couple of times, the effects are vast swathes of destruction, annihilating everyone in an ever closer-drawing circle…and eventually allowing a horrid chthonic entity access to our reality. Yes, this being is properly statted. I enjoyed this one as well.

Daniel Sell provides what would have been my favorite section herein – the Wolfmother. A twisted fairytale that is truly horrific, haunting the Kairnlaw, where the men marry early, and not well, before the stag-dreams; the fear of the entity includes potentially forced marriages, which can be pretty frightening proposals. Unmarried gentlemen in the region have a 1 in 20 chance of attracting the Wolfmother, a woman with the face of a wolf, dressed for a spring wedding. She will offer a gift – and those not offered one must save vs. magic to wake up. The person offered the gift can choose to refuse the gifts or accept them – the gifts are delightfully twisted: An immovable rope with a tied sorcerer dangling from it; a song so beautiful, it might strip you of your ability to enjoy music…the gifts are unique and strange. Accepting three of them will make you leave with her, never to be seen again. If you refuse the Wolfmother, she will attempt to rape the character (she has the might of an Ogre), to give birth to resentful wolves that will hound the character. Here’s an issue I have with this otherwise genius critter: It doesn’t provide stats, which is legitimate for horror-creatures that behave more like story obstacles (see Undercroft #2 for a great example on how to make a creature-as-story-obstacle work); however, there is a good chance that the Wolfmother will be fought, and needs to be faced in combat. The text even notes: ”if defeated..:”, so the absence of stats is a downside. In spite of this, any GM who likes dark fantasy/horror with a fairy-tale-ish slant should consider this to be a gem: I’d see this as a great creature for the Witcher RPG or Dolmenwood, for example.

Ezra Claverie’s Furnace Athropoids are next – these are essentially power-armors for a race of alien explorers accustomed to scorching heat. As such, their suits are potentially dangerous to be around; more importantly, their telepathic messages can influence the brains of stupid humanoids, and cause compulsions. I should love this. The writing is excellent. And yet, this is easily one of the weakest offerings in the entire run of the Undercroft so far. The rules-relevant material is buried in flavor-text, and inconsistent. At one point, the text suddenly mentions different HDs, and flavor-text and rules-relevant information is blended everywhere. Using the material herein is a total mess, and having proper sequence of presentation, proper stats, would have made it shine as much as the concept per se deserves.

The final section also showcases how multiple HD-creatures work – Anxious P. Introduces the most twisted creatures here, with the Noble Giant families. We begin with essentially a confession/diary of a kind of crypto-anthropologist researching the giant family called the “Manifold Crust-Whippets”; these giants lair in a state of primitive savagery, and the author claims they do not differentiate the Self from Want, which is an interesting take to make the giants less human. Indeed, the scientist seems to develop a strange and disquieting obsession of trying to be like them (making this a great read) – as it turns out, this is due to the drugging pollen the plants they bring around.  They also have a honey-angle on a mechanical level, and there are guidelines of how giants of different sizes and local populace interact (“fight or flight”-size, etc.), with stats grounding the content in mechanics. The effective horror hits at the end of the scholar’s account – when he witnessed what they do in their disturbing orgies with the bears they capture, when the small clues fall into place. It’s not pretty. Honey…could kinda work as lube, you know…This one really made me shudder. It’s that well-written.

Editing is generally very good on a formal level; formatting and information sequence, as noted, could be better in some of the sections herein. Layout adheres to a one-column b/w-standard, with two nice original artworks. The print version is certainly worth owning.

So, this installment of the Undercroft penned by Daniel Sell, Anxious P., Evey Lockhart, Forrest Aguire and Ezra Claverie had a tough job – I consider the Undercroft, alongside with Dolmenwood, to be one of the best ’zines out there, easily. The Undercroft features some of the best pieces of content I’ve seen, and is remarkably bereft of filler. Against this backdrop, this installment struggles slightly. For example, I absolutely adore Forrest Aguire’s grimoires in every way, but I couldn’t help but feel that it would have warranted an application of the system to the entirety of the gaming system in a full-blown book. Daniel Sell’s Wolfmother is a GENIUS creature, and it’s so close to being perfect, but the need to stat the creature’s combat encounter, etc. makes it less comfortable to implement than it should be. And then there is Ezra Claverie (whose writing I love) clearly struggling with the presentation of the concept – only to have the next article, Anxious P.’s giant families, showing how it’s done. (As an aside: I always love what I read from Anxious P. – please write a big book. Please? Publishers, get on it!) As a whole, this Undercroft-zine feels uneven not in the quality of the concepts, which are awesome, but in their precise implementation and scope. As such, my final verdict can’t exceed 4 stars.

That being said, if you even remotely consider the concepts in this installment to be cool, get it – it’s certainly worth the low and fair asking price.

Prefer print? If you’re in the United States/Canada/Middle-/South-America, you can get the zine here on exalted funeral’s store!

If you’re in the United Kingdom or Europe, you can get the ‘zine here in Melsonian Arts Council’s shop!