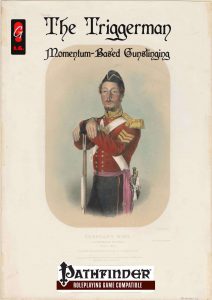 This class clocks in at 33 pages, 1 page front cover, 1 page editorial/ToC, 1 page SRD, leaving us with 30 pages of content, so let’s take a look!

The triggerman is, in many ways, an alternative to the gunslinger that uses a different engine than that usually associated with the gunslinger class. The class gets ¾ BAB-progression, good Fort- and Ref-saves, d8 HD, 4 + Int skills per level, and proficiency with simple and martial weapons, light armor and firearms. Any firearm wielded by the triggerman gains a spontaneous focus pool, which has a starting size of 0, and increases up to a maximum of 4. A firearm with a  focus pool of 0 loses the pool, but otherwise, it retains its focus pool. If the focus pool remains unaltered for 1 minute, then the pool drops to 0. 1st level nets the gunsmith class feature, including the starting weapon and Gunsmith as a bonus feat. At 5th level, we have gun training, which nets Dexterity bonus to damage with a specific chosen firearm, and the increase of the misfire rate with a firearm of this type is halved to 2 instead of 4. Every 4 levels thereafter, the triggerman gets to choose an additional such specialization.

The triggerman is primarily defined by techniques: These should be familiar to fans of Interjection games in the way in which they are structured: Techniques list a focus required to use them;  techniques executed can result in a focus change that influences the focus pool, and otherwise, techniques can be used at any time; techniques with a  focus change of +1 can only be used in combat, and no, punching bags of kittens explicitly does not qualify as combat, nor does playfighting with allies. (Thank you!)

At 3rd level, and every 8 levels thereafter, the triggerman gains a bonus feat.

The styles presented are dragoon, gun fu, marksmanship and munitions – we’ll talk about those in detail later.

At 2nd level, the class gets a moxie pool. It starts at 0 points, and caps at 4. Whenever the triggerman performs a technique with a focus change of -2, -3 or -4, he gains moxie points equal to one fewer than the number of focus points expended. A -3 focus change technique would yield 2 moxie points, for example. The triggerman’s talents make use of this pool. The moxie pool resets to 0 each morning, whether or not the triggerman rested. At 7th level, the triggerman gets moxie stability, which, when a morning would reset moxie to 0 and he has 1 or more moxie left, instead sets it to 1. This cap is increased to 2 at 15th level.

At 2nd level, the class gets one moxie talent, +1 talent every 2 levels thereafter. Talents marked with asterisks are passive talents that scale with the moxie pool’s current point load-out. At the beginning of the triggerman’s turn, they select a single such talent and gain the listed benefit. In addition to the talents selected, the triggerman gains 4 moxie talents automatically: The first is smoking gun, gained at 2nd level, which lets you expend 1 moxie point as a free action to grant a firearm with 0 focus points 1 focus point, or expend 2 moxie points to grant a firearm with 1 or 2 focus points one additional focus point.

At 4th level, the triggerman may, whenever they reload an advanced fire arm, or the final barrel of an early fireman, expend 1 moxie point, increasing its capacity by the moxie points in the pool (I assume after the expenditure – this should be clarified), up to a maximum of twice the firearm’s base capacity. In early firearms, this extra capacity is located in the barrel last loaded. This prevents you from using asterisk’d talents on your next turn after using it. At 7th level, the triggerman may harmlessly fire a firearm at the end of the turn; this expends ammo, takes no action, but if the firearm has a focus point array of 0, this grants the firearm 1 focus point. At 20th level, the first time the triggerman would be reduced to 0 or fewer hit points each day, they may execute a technique known with a  focus change of -4 as an immediate action, resolved immediately before taking the damage, without needing to meet the focus required for it, or requiring that you expend the focus points for it.

The moxie talents include an Armor bonus to AC, as well as limited DR if you have 4+ moxie points, negating low amounts of physical damage if you have more moxie points, or additional damage for the first firearm attack each round. These are all examples for the passive, asterisk’d talents. There also is a means to benefit from more than one asterisk’d moxie talent. On the active side of things, we have the means to enhance saving throws via moxie expenditure, a talent that lets you expend moxie to change the damage of your bullets to cold, fire or electricity damage, deafening shots, expend moxie to negate ranged attacks, essentially advantage for physical skill checks, and a Dirty Harry talent – if you fire the final shot, you can expend moxie and have the gun reloaded…so even guys who can count are screwed. Awesome. Levels 4, 6, 8 and 10 are caps where new moxie talents are unlocked, and at higher levels, you can learn to reorient bullets, swift action reload siege weapons, or enhance your speed. Over all, these are diverse and interesting! There also are a couple of potent defensive tricks, like rolling d6s to reduce damage that’d kill you or rerolling death saves.

The class comes with an array of surprisingly interesting favored class options – both a regular array for the element-touched races, aasimar, etc., but also for puddlings, orcs, drow, etc. These interact in often exciting ways with yet another class feature – at 3rd level, the class gets “He Called Her Lucille”; this class feature lets you choose a signature firearm, to which the gun training feature applies; additionally, the first broken condition is ignored each day, and the gun gets signature modifications. The gun can hold one modification, and gains an additional one at 6th level, and every 6 levels thereafter. These include means to reduce misfire rates, scatter, extra chambers, reduced range increment penalties, lacing the shot with flammable sludge and the like. The aasimar  FCO nets you a modification that grants allies temporary hit points when you hit a target, and puddlings get a customization pool that allows them to apply customizations to standard firearms. (In case you were wondering: The signature firearm’s customizations may be altered while resting.) The book also features general favored class options for all races in addition to the race-specific ones.

15 feats are included for the class, which help enhance certain techniques, build moxie pool, adding minor elemental damage to ammo, DC-enhancers for a specialization, draw bullets out of the dead or destroyed foes, which gains bane , learn additional techniques or ranged feint.

Okay, what about those styles? Well, structurally, a few techniques are locked behind levels – 2, 4, 6, 9 and 10, to be precise, but the majority are available sans prerequisites. Some are denoted as “special” and the pdf lists them all on their individual lists, which is a good thing. The dragoon style has tricks like making a misfire instead produce a 15-ft. cone of grapeshot, juryrigging broken pistols…wait,w hat? Well yeah, the dragoon has a technique that lets them either grant a firearm the broken condition (Focus +1) or remove the broken condition from a firearm (Focus -1); we have powderjumps, energy cones, or use firearm attacks to fly (!!) – as long as you keep firing, you keep flying!

The gun-fu style is, obviously, all about equilibrium-like trickery – using firearms to threaten, counter AoOs…and what about first-range increment AoOs. In a callback to the 3.X Tome of 9 Swords, the highest level technique is called White Raven Redux and lets you move a target’s initiative to directly after you for the big focus-4 technique, but gets the rules precisely right. Marksmanship is about called shots – no, not the standard engine; but we have sniper-like techniques that let you hit knees, equipment, and enhances your ability to vanish after firing. I also loved how mindgames let you change readied techniques via the Mindgame technique. There also are shots that can cancel spells and make the target temporarily forget abilities. Provided you have Improved Steal, you can use shots to steal items at range. The munitions style, finally, is about, well, munitions – we have scattershot, bonus elemental damage, chaosbullets that deal damage to a random ability score, making ammo count as a particular material – interestingly, this, however, halves the damage caused if the chosen material is not required to bypass DR, rewarding player skill and knowledge, and validating adamantine being available from the get-go. Cool choice.

Even the “normal” talents tend to, more often than not, do something interesting: If you hit a target, for example, with a mighty called shot to the brain, you deal 1d4 damage to all mental ability scores. This differentiates between sequences (e.g. 1,2,3 damage) doubles, and if you dealt e.g. more Intelligence than Wisdom damage, etc. – I genuinely like how an ability that would have called it quits at ability score damage suddenly becomes intriguing. Getting an emergency stash of special ammunition, firing balls of glitter (blinding and essentially glitterdusting targets)…and before you ask: Yes, amoo and techniques that work in scattershot-ish ways and how those interact – it’s covered!

Editing and formatting are very good on a formal and rules-language level. Layout adheres to the no-frills two-column b/w-standard of Interjection Games, with artwork used being sourced from the public domain.  The pdf has no bookmarks, which is jarring makes using the electronic version much less convenient than it should be.

Bradley Crouch’s triggerman is a different class than I expect, but that’s not a bad thing. In many ways, this class feels more magical to me than Interjection games classes, with a less pronounced grounding of why certain shots can do what they do, but personally, I did not mind. An interesting angle here is that the triggerman is a great gunslinger with a wholly different, robust engine and A LOT of customization tricks. As such, it does not compete with the Legendary Gunslinger, N. Jolly’s excellent rebuild. (Which I personally prefer by a margin, but that’s a personal preference.) Instead, I can see these two classes existing in the same world, as they cater to different play styles – the triggerman is the class for the customization fanatic in us, while the legendary gunslinger is the class the original gunslinger had been. The triggerman’s biggest drawback imho is the lack of supplemental items and bookmarks; both very minor blemishes, but enough to reduce my final verdict to 4.5 stars, though I will round up for the purpose of this platform. And yes, it gets my seal of approval. If you wanted a gunslinging character sans grit, who play very different? Well, this is what you’ve been searching for!

You can get this unique class here on OBS!

The class may also be found in Ultimate Momentum here!

If you’ve missed the fantastic Legendary Gunslinger, it can be found here!