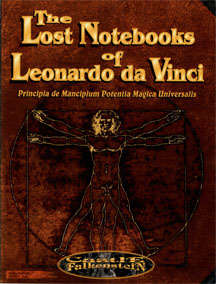 This massive supplement clocks in at 128 pages; if you detract ToC, editorial, etc., you instead get 124 pages out of this book.

This review was moved up in my review queue due to me receiving a print copy of the book. My review is based on the print copy.

First of all: Don’t be fooled by the cover. Yeah, I know. It doesn’t exactly inspire confidence. Once you flip open the book, however, you’ll be greeted with different aesthetics. But before we get into the nit and grit of this massive book, let’s state something clearly:

Even if you don’t play Castle Falkenstein, this may very much be worth getting. I will elaborate why below, but it is my ardent belief that anyone remotely interested in Da Vinci, steampunk and Jules Vernesian, archaic retro-scifi/punk-components should continue reading. (And yes, let it be known that Castle Falkenstein is about high adventure, and not a game infused with punk aesthetics – this does not change that the ideas herein have universal appeal!)

Why? Well, the first 110 pages of this book? They’re basically one ginormous player handout. You see, the core conceit of this supplement is that Da Vinci, with his superb gifts of observation, was somehow aware of the (theoretical) existence of magick. He made small strides with it, limited by our world’s issues in that regard when directly compared to New Europa – and then, Tom Olam brought the notebooks, by coincidence, to New Europa. Here, these notebooks, deemed lost, could change the very fabric of reality, were their contents made known.

The notebook itself has been encoded and was obviously written in archaic Italian, mirrored, etc. – and as a fun enhancer of the conceit presented, one such page is reproduced before the rest of the book has been decoded by proper magick. As a nice aside – this use or sorcery also accounts for the few anachronisms and odd manners of speech that may be found within. Clever! Throughout the book, the sidebars provide annotations by Tom Olam, Grey Morrolan etc. on Da Vinci’s theses. Structurally, the book is a combination of historical fact 8surprisingly well-researched!), tinted by a bias that can be assumed to represent that of Da Vinci, with events in our Europe providing often the inspiration for the different types of “Ingenium” herein – clever to use that term to differentiate these machines from regular engines.

Now, the lead-in is similarly smart: Da Vinci’s recorded notion of tank-like devices ultimately leads him into the more far-fetched designs for various kinds of ingenium within, and this very much brings me to a component of the book that needs to be praised. From the font to the parchment-like background with its brown sidebars, the book aesthetically really enhances the basic idea of the notebook, but the true benefit? The thing that really hammers home the idea  and the illusion of having Da Vinci’s lost notebook in your hands? That would be the illustrations by James Higgins. Each ingenium within features its own Da Vinci-style drawing, and if the text and banter in the sidebars won’t get you inspired to implement these ingeniums, then the glorious drawings will.

So, your players can find the notebooks, what will they find within? Well, for one, one of the most delightful reading experiences I’ve had in a long while in a roleplaying game supplement – the deliberate decision to interject historical commentary in-between the respective ingenium write-ups makes the book read like a blending of a diary and a proto-scientist’s notes, spanning the years of up to 1502. Of course, the test-runs in such a magick-deprived world as ours may result in all manner of at times tragic, at times hilarious consequences for the genius…and the reader gets to share in that.

But why bother with this book, you ask? There are so many books to take inspiration from regarding magical devices out there, so many spells and magic devices/items out there. What’s different here? Well, there is one crucial difference here, and it is entwined with Castle Falkenstein’s magic(k) system.

WAIT. I know. If one thing in the game needs some revision and clarification, it’s the magick system. It is per se inspired and mighty once you understand how to use it, but its presentation has to be labeled as byzantine. However, the system also has one gigantic plus as far as I’m concerned. It explains how magic works. There is an internal logic to the limitations and ways in which magick works within the context the game; unlike many games, the rules focus on explaining the underlying principles by which magic works. Now, combining this very scientific notion of the functionality of magick, deeply ingrained in the game system with the notion of scientific devices innovated by Leonardo Da Vinci, and we have proto-magickal science that feels simply more plausible and grounded than in any other supplement I’ve read so far – it feels like, you know, depictions of magic like the ones you can find in occult literature and the manuscripts of ancient orders. Not a single ingenium stoops to the low of the dreaded “A Wizard Did it!”-syndrome. Instead, this book constantly is making full use of the quasi-mathematical precision and codification that the powerful magical system offers.

This is a subtle notion, but one that is emphasized, time and again, throughout the book, as the annotations and commentary discuss limitations and feasibility of the implementation of Leonardo Da Vinci’s designs. The combination of the very clever rules underlying Falkenstein’s magic and the conceit of Da Vinci’s design fuse in a perfect way – and it should be noted that reading the book may actually help you understand more intricate components of Falkenstein’s magick.

But what type of ingenium devices may be found within? Well, from earthquake machines to chests that disassemble contents (a kind of copyright-shredder), to devices that force targets to tell the truth to magickal steam engines, from dissolution engines to means to heal creatures of diseases, proto-fridges and the like, many of these are influenced by modern-day conveniences, but their contextualization makes them stand out as distinctly New European. Dimensional barriers, a temporal barrier, etc. – there are plenty of truly cool types of ingenium presented.

But what does that matter if it’s all flavor? Well, that’s the beauty! You see, not all devices are feasible or work as Leonardo envisioned them to; the final section of the book notes the suits, costs, operation and investment required, all in a helpful and concise manner. Similarly, and that is a definite improvement in contrast to the core rules, the rules presented for creating your own ingenium devices are actually very concise, easy to grasp and fun.

Editing and formatting are very good on a formal and rules-language level. Layout adheres to a two-column parchment-style standard with brown borders that house the copious annotations for the different chapters. As noted before, the various artworks inside deserve applause – seriously. I can’t fathom why the cover is as comparably unappealing, when the interior of the book is so awesome. The softcover I have is perfect-bound and features the name properly on the spine. As noted before, I can’t comment on the merits of the pdf iteration. Considering the low price point of the print book, I’d recommend that one, but as you know, I tend to prefer dead tree.

Edward Bolme, with the help of Mike Pondsmith and Mark Schuhmann, has crafted a book I thoroughly enjoyed – more so than the other work by Mr. Bolme I’ve read before. Written entirely (yes, even the rules!) in character, this lost notebook not only is a glorious expansion for Castle Falkenstein, it also is a great handout, and, more importantly, the supplement is a genuinely exciting reading experience. I rarely encounter roleplaying books that focus on presenting essentially a new sub-engine for a rules-system that are not a chore to read, and this is the exact opposite – a joy to peruse, and yet another all-time-classic that has aged remarkably well. If the notion even remotely excites you, get this – this book has entertained me more than the entirety of the Da Vinci’s Demons series so far.

Final verdict? Highly recommended, inspiring, 5 stars + seal of approval. Did I mention that we need more Castle Falkenstein? I’d so love to see a new edition, a new game…Hey, perhaps CD Project Red will make that game next after Cyberpunk… one may dream, right?

You can get this inspired and delightful to read supplement here in its pdf-form on OBS!

The print copy can be found for just $14.00 here on R. Talsorian Games, Inc.’s storefront!

Reviewing takes a lot of time and effort. Please consider leaving a tip via direct donation, or join my patreon here – every bit helps.