The Genius Guide to the Talented Otter Dragon (Patreon Request)

The Genius Guide to the Talented Otter Dragon 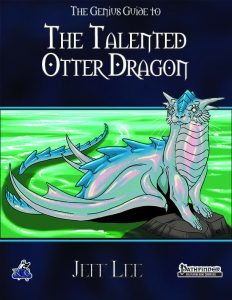 This pdf clocks in at 20 pages, 1 page front cover, 1 page editorial, 3 pages of SRD, 2 pages of advertisements, leaving us with 13 pages of content, so let’s take a look!

Okay, first things first: I am pretty positive that this creature was created using the Talented Bestiary, a book I do not own. As such, I can’t comment on how well it implements the guidelines in said tome.

That out of the way, we begin with an introduction that contextualizes the otter dragon in the fantasy world, before diving into the abilities them have. Breath weapon-wise, we have a cloud of electricity that also affects the targets with touch of gracelessness, using the dragon’S HD as CL, and getting the resistance/immunity interaction right – kudos! Somewhat odd: The ability to add electricity damage to bite attacks is called “Burn” – which is already a word that denotes two thoroughly different abilities in PF1. This may be due to adhering to the bestiary’s guidelines, though, so it gets a pass. (It’s also a cosmetic nitpick to boot, one that doesn’t affect rules-integrity.) At adult age or later, we have change shape, and otter dragons of young adult age or older get an aura that can suppress fear and rage effects. We have dragon senses, fast healing at later age categories, and they cast spells as oracles, but choose them from the druid’s list, get SPs, SR, uncanny dodge and water stride – they are actually more nimble in the water.

The lion’s share of the pdf is then devoted to a total of 12 otter dragon statblocks, one for every age category, from the CR 2 wyrmling to the CR 17 great wyrm. After each statblock, we have a name and one paragraph describing a sample otter dragon of the respective age category, with sizes increasing from Tiny to Large. The integrity of the statblocks tends to be better than I expected them to be; remember that, while “druid spells known” for the latter age categories may look puzzling at first, the spell list is referenced here, not the actual mode of spellcasting.  I considered it to be rather refreshing to see plenty of instances herein (all that I reverse-engineered, in fact), where size modifiers, special size modifiers, CMB and CMD, initiative – you know, all those pesky values? Well, they’ve been calculated in a precise and correct manner.

…any nitpicks? Öhm…well….let’s see…does it count that the “0”-level indicator in the dragon’s spells known is in italics and shouldn’t be? …Yeah, I know. Nobody cares, and frankly, I don’t care either. This is a cool collection of dragons.

Conclusion:
Editing and formatting are very good on a formal and rules-language level. Layout adheres to the talented series’ two-column full-color standard, and sports wide margins, but also lots of crunch per page. The pdf is fully bookmarked for your convenience, one bookmark per statblock. Kudos! The artworks should be mentioned as well, for there are multiple cool full color original pieces here, not just the one you can see on the cover.

Jeff Lee’s otter dragons are cool. I really like them, their stats are precise, and the pdf provides a significant amount of otter dragon bang for your buck. No complaints, my final verdict will be 5 stars.

You can get these otter dragons here on OBS!

Missed the Talented Bestiary? It can be found here!