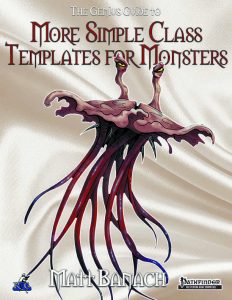 This pdf clocks in at 23 pages, 1 page front cover, 1 page editorial, 1 page SRD, 1 page advertisement, leaving us with 19 pages of content, so let’s take a look!

So, applying class levels to monsters is often not a valid or smart move n the CR-system, as e.g. slapping a single wizard level on a CR 19 critter will contribute nothing to the build. The first of these genius guides remedied that for a plethora of classes, and this one follows that lead, this time around covering the Occult Adventures classes and the Vigilante. Since these classes have more complex systems, the abilities often work differently than for the class. Spellcasting only allows for the casting of the three highest spell levels it would have access to based on HD, though lower level spells may be spontaneously and optionally added, taking some build-load of the GM. The templates are often based on an ability score, and as such, a global guidelines is that a minimum ability score for an efficient critter should be around CR +9.

Each of the templates features quick rules and rebuild rules, and each of the templates features a sample creature. Kineticist creatures have CR +3 if below 10 HD, +4 CR if it has 10 or more HD, and use Constitution, unsurprisingly, as key ability modifier, and Burn is ignored, with infusions instead using daily limits – which makes sense for playability’s sake. The sample creature is a star here – we get a kineticist plague locust swarm! These sample critters also come with read-aloud text, and full-color artworks by Jacob Blackmon – nice!

The medium template (CR +1; +2 for 6+ HD, +3 for 10+ HD) ignores influence penalties and taboos, instead opting once more for a daily use cap; spellcasting is allocated properly, and the sample creature is the patchwork soul, an awakened flesh golem who can recall being other people – which is a genuinely cool angle! The Occultist creature has the same thresholds that determine CR-increases, and features a spell slot table. Not a fan: Resonant powers are ignored. I get why, seeing how mental focus is gone and focus powers are treated as daily use options, but yeah – the loss of resonant powers is sad. The sample creature here is btw. an occultist-v tooth fairy – aka cryptodontist. Easily one of the most twisted critters I’ve seen below CR 1!

Mesmerist creatures get +2 or +3 CR (with 9 HD being the dividing line), and a handy spells known table; the sample creature here is the baleful reflection, a CR 4 mesmerist soulsliver that may not be tough, but in the hands of a smart GM, can be a rather deadly adversary. Bold stare improvements are tied to HD, and mesmerist tricks are simplified to daily uses. Psychic creatures have their thresholds for CR-increases at 8 and 14 HD, respectively,  and flat out uses Intelligence for discipline powers; phrenic pool points are gone, replaced with daily uses where appropriate. The sample creature here would be…a psychic velociraptor! Cool! Bu wait! We actually get more! We also get the cool psychic flumph from the cover! Yep, two builds! Nice!

The spiritualist gets a flat roaming range for the phantom and a small number of spells, with the HD thresholds to determine increased CRs once more being 6 and 10, respectively. The build here would be the gearghost-based “Ghost in the Machine”, which, with its phantom, can potentially wipe experienced parties – the build is pretty darn clever, and, when played correctly, will properly challenge a party. Kudos! (Yes, abbreviated phantom-stats are provided).

The vigilante creature, finally, can have its CR increase by +2 or +3, with 10 HD being the threshold; with slightly less moving parts than the other templates, this one allows for a pretty seamless integration that will make it very hard even for the most experienced of players to discern that the creature is not built via class features, regarding its overall capabilities, of course. The sample creature here, funnily, would be a vigilante unicorn!

Editing and formatting are very good on a rules language and formal level – I reverse-engineered the crunch for a couple of builds, and in these cases, the material checked out – kudos! Layout adheres to the 2-column full-color standard of the series (the one without the huge margins, mind you), and we get quite a lot of crunch here. The full-color artworks contributed for all sample creatures adds to the pdf. The pdf is also fully bookmarked with nested bookmarks.

This felt familiar. A quick glance at the credits told me why: The Faces of the Tarnished Souk-dreamteam of Matt Banach as author and Justin Sluder as developer once more reunites here, and presents us with genuinely challenging and exciting builds; I’d go so far as to claim that this pdf is worth getting for these sample creatures, even if you don’t have any interest in the tables! The creatures are creative, and the templates do what they’re supposed to – they allow you to quickly add class-specific angle to creatures without drowning you in minutiae. Love it! 5 stars + seal of approval.

You can get these useful time-saver templates and the damn cool critters accompanying them here on OBS!