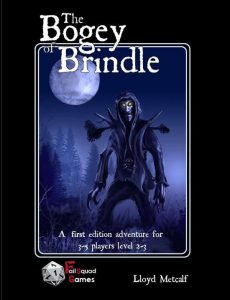 This first installment of the Brindle-series clocks in at 34 pages if you disregard front cover, editorial, etc. I noticed that neither iteration of the adventure features an SRD, but that just as an aside. Important for the purpose of this review: I own the perfect-bound print softcover of the OSR-version, and the pdf of the 5e-version; I assume that the properties of one version hold true for the other and vice versa.

Nominally, the Bogey of Brindle is designated as compatible with OSRIC, which means that conversion is pretty simple. The difficulty of the module is very much contingent on how good the players are in old-school thinking, i.e. unconventional problem-solving of potential combat scenarios. Groups unaccustomed to that way of tackling a module may die the death of a thousand cuts, while those that are experienced in such thinking may have a very easy module on their hands. This is designated as a module for 3-5 PCs of 2nd – 3rd level, but I first level PCs can easily succeed here as well – they just need to be a tad bit more careful.

Theme-wise, this, although not explicitly designated as such, works as a pretty neat Halloween or Thanksgiving module, depending on the emphasis you place here, and in fact, depending on your GM-style and what you emphasize and/or leave out, would actually work in equal parts well for adults and kids, with my recommendation being ages 8+, but since all kids are different, I trust in your discretion there. Anyhow, this recommendation stems from one thing being palpably absent from this module: Cynicism. This is a rather wholesome and even funny adventure, and a specific plot-point would actually prime this for being easily adapted in Pathfinder’s Second edition, but that as an aside to which I’ll return later.

The rules material herein includes 2 custom spells and a cantrip provided in a statblock of the BBEG, one of which is a better variant of magic mouth that should probably be situated at a higher level. Both of the spells have been formatted improperly and lack the proper formatting information OSRIC spells have, rendering them inoperational, as e.g. the rules-language references a range that is never specified; these spells have a primarily narrative function, though, so they can be KINDA ignored. Kinda. With gritted teeth. Still, it’s one of the weaknesses of this module. Indeed, formatting is not good throughout – instead of putting spells in italics, they are capitalized – most of the time. The book is inconsistent with that. Said BBEG? The statblock notes the number of slots for 2nd level, but not for the first, requiring referring to the OSRIC book. While ability scores and languages, modes of perception are provided for the friendly NPCs, they lack other combat relevant statistics, making their statblocks essentially only halfway done – they are not enough to run the NPCs in a combat scenario. So yeah, if you expect precision regarding the rules (not that hard to achieve for OSRIC), let me tell you right now that this module will annoy you in that regard. The adventure also includes a new creature, which is a worm with paralytic tendrils – a carrion crawler variant, essentially. Not impressed there.

What did impress me, though, were the visuals: Lloyd and Raven Metcalf are artists, and it shows – the original pieces of artwork provided for the module are impressive b/w-pieces, and both the map of the eponymous village of brindle (with even a touch of isometric cliffs) and the dungeon featured within are awesome to look at. I did not expect the module to feature such neat artworks. Minor niggle: The dungeon area could have used player-friendly maps for VTT-use etc. – you know, sans secret doors indicators, sans numbers. A minor downside: The dungeon map has no grid or scale noted, which can be relevant, considering the challenge faced there, but we’ll get to that later. It should be noted that the module sports generally well-written read-aloud text.

All right, this is as far as I can without diving into SPOILERS. Potential players should jump ahead to the conclusion.

All right, only GMs around? Great! So, the frontier settlement Westwego has an issue – the Firstfeast celebrations are approaching, and while the church of purity frowns upon the annual excess, it can use the tax revenue…but more importantly, the village can really use the boost of morale before the years’ darkest days. Thankfully, Westwego isn’t too far from the eponymous settlement of Brindle, a settlement that specializes in producing the finest tobacco, booze and (pipe)weed. So yeah, this adventure is essentially a beerrun! Awesome premise!

If you’re following my suggestion and want to run this as a Thanksgiving/Halloween-ish kids-module, just replace tobacco, weed, etc. with sweets, turkey and the like – granted, the map of Brindle spells these out in text, but yeah, this is a simple way to modify the module.

Anyhow, the beerrun begins with a brief wilderness track towards Brindle, but, alas, the party will soon find out the reason for the troubles getting there – in a rather unrewarding manner. You see, there are quite a few traps on the way through the wilderness, and they are not fair: They are not telegraphed in any way, as they just happen – they are invisible lines that are traversed. A better way to handle that, would have been to describe a small scene, and having the trap be part of that scene in a fair manner. Worse, one of the traps has a chance for a catatonic agent. Okay, what does that do? No clue. No rules are provided.  As written, this is not a good start for the adventure, to say the least, but thankfully remains the weakest part of the adventure.

Once the adventurers arrive in Brindle, they’ll be greeted with a rather intriguing sight: Brindle is a village inhabited entirely…by goblins! And they work! Sure, there is playfulness in the job descriptions, when the module refers to hoochmaidens and poop-flingers, taking a funny and irreverent take towards agriculture, but the village excels in another way – it manages to feel plausible. From the “street” names to the details, it feels plausible, something that also extends to the entirety of the adventure – it’s a small thing, but it’s this very hard and ephemeral thing to achieve that I rarely get to see and really enjoy.

Anyway, the goblins, former adepts of a cloister, who, courtesy of their quick succession of generations, essentially became pretty “good” as far as goblins are concerned, live in fear of the night, for that is where the horrible bogeys arrive! As an aside, the module also has the option of arriving at night, and start with combat, but I’d advise in favor of taking the time to soak in the unique atmosphere of Brindle, supported by the friendly and quirky NPCs. While, as noted before, these NPC-statblocks are incomplete, they don’t need to fight – that’s what the party is for.

The legend of the bogey, started in the context of some alcohol-induced haze, has been indeed hijacked – you can see that on the front cover – and indeed, the bogeys are…kobolds. Clever kobolds under the lead of a strange, feathered illusionist kobold deemed to be a quasi-deity. The crafty creatures have had a field day plundering Brindle’s excellent trading goods, cowing the goblins effectively.

Once the party has repelled the nightly assault and figured out the truth, they will be able to track the assailants to their base, an abandoned dwarven mine, where the kobolds have also found a dragon egg…but that might not be relevant for you if you don’t plan on playing the next adventure in the series. A big plus here: Particularly smart and crafty groups can deduce that there is more than one means of entering the dungeon, which is a pretty nice angle we should see more often – kudos for that.

The lack of scale for the dungeon can potentially cause some problems when running this, though, for the adventure deals with the defeat of the kobolds – and there are over 100 of the little pests in the complex. That’s what I meant by “death of a thousand cuts” – while kobolds pose no serious threat to the party at this level, their sheer numbers might well overwhelm the party. The module does mention a few of the strategies that the PCs might employ, and I applaud it for that, but also getting some response actions from the opposition, how they handle e.g. attempts to smoke them out? That’d have been helpful. Still, nice to see a scenario that tentatively helps GMs not yet as accustomed to old-school styles of play account for such strategies.

And yet, having a proper grid for a massive running battle/retreat etc. would have been very helpful indeed. On the plus-side, like the village, there is a consistent sense of plausibility in the dungeon, and plenty of small details ultimately make the complex feel both lived in and organic – from acidic sludge to a ton of small details, the terrain feels alive and plausible, and is often combat-relevant in a nice manner. You can *feel* that the author genuinely cared about making this adventure fun, rewarding and versatile. And that is very important to me.

Editing and formatting are okay on a formal level, but on a rules-language level, there is a lot of room for improvement. The layout adheres to a solid 2-column b/w-standard, and the pdf features several amazing b/w-artworks and nice maps – though I do bemoan the lack of a player-friendly variant for the dungeon map, and the lack of scale on it. The pdf comes without bookmarks, which constitutes a huge comfort detriment. I strongly suggest getting print; for pdf only, you should round down from my final verdict.

Lloyd Metcalf’s first Brindle-module was a thoroughly pleasant surprise for me, because it oozes heart’s blood and passion; it is not a particularly well-designed module and stumbles in the formal criteria, but it is written with such passion that it was impossible for even cynical, jaded ole’ me not to smile. Brindle is genuinely charming, often funny, and the module is delightfully unpretentious. It’s readily apparent that the author genuinely cares about everything here, that this is the antithesis of a corporate module. It doesn’t have a sexy elevator pitch or anything – it’s just honest, great, classic fantasy with a lot of passion and heart. And frankly, I should round down from my final verdict of 3.5 stars. In fact, if you’re picky about formal criteria being perfect, this’ll probably be closer to the 2.5 stars vicinity for you, but this module touched me emotionally in a way that is impossible to artificially craft. As a person, this thoroughly flawed little adventure was more fun to me than many comparable, more professional ventures that get all the rules right. Hence, for once, my final verdict will round up. If what you read sounds intriguing to you, then take a look – it’s a genuinely charming adventure that feels friendly, that lacks cynicism. And we need more of those in these trying times.

You can get this adventure here on OBS as a pdf!

Usually, the print copy could be found here on Fail Squad Games’ storefront, but as per the writing of this review, it seems to be out of stock. Still, click on the link if you want to check!

If you consider my reviews to be helpful, please consider leaving a donation or joining my patreon here.