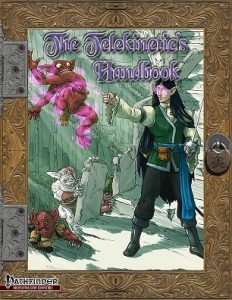 Well, but let’s begin this analysis not from the beginning, but rather the end: telekinesis was one of the components in Spheres of Power that was awesome, but not necessarily perfect: Hence, this book provides needed clarification in its 7th chapter: Items held via telekinesis are considered to be attended or held and multiple telekinetic grapples are covered and the bludgeon-option of telekinesis is similarly clarified, eliminating all the small issues, including proficiency-questions and damage types – kudos! Hostile lift is also clarified alongside e.g. acceleration (which now works in conjunction with abilities that can be performed at the end of a charge). For our convenience, dancing weapon reaches are collected in a table by size and divided mind is similarly clarified.

Very useful: The chapter also sports a quick reference sheet that codifies density of materials, objects sizes with sample items and a handy table codifies weapon size in relation to item size: Ammunition is e.g. considered three size categories smaller than the weapon for it, while two-handed weapons are considered to be the same size as the wielder – exceedingly useful, not only for the purpose of this book. All right, now that we’re on the current page regarding Spheres of Power-telekinesis, let’s take a look at the new options presented herein after the introductory fluff!

The first piece of crunch the book offers is the Electrokinetic Elementalist – instead of weave energy, he receives access to the Destruction and Telekinesis sphere, with the Electric Blast Destruction talent as a bonus magic talent (here, the pdf has a superfluous plural “s”), but also gains the Energy Focus (electric blast) and Limited Telekinesis drawbacks sans bonus talents. If the character already had access to either of the spheres, he does not gain alternatives, but neither does he gain the drawbacks associated with the respective spheres. It should be noted that the character does gain a talent of his choice if he already has electric blast.

The character uses the full class level as caster level for purposes of electricity damage-causing destructive blasts and when using telekinesis to manipulate metal objects. Instead of bonus feats granted by the Elementalist class, the Electrokinetic may choose electrokinetic stunts, basically the array of talents of the class. A total of 8 such stunts are provided, and they range from making living creatures count as metal for telekinesis-purposes to the ability to see bioelectricity (translated as 60 ft.-blindsense that only applies to living creatures). Interesting: Using swift actions to charge metal bludgeoning telekinesis attacks with electricity-based destructive blasts…and no, before you ask:

They may not be modified by blast shapes – good catch there. Better healing and a kind of DR versus ability damage and drain also are pretty cool and I know that increased range will be one that more than a couple of PCs out there will enjoy. Redirecting electricity that failed to penetrate your Elemental Defense is also rather cool. Obviously, these guys are locked into electricity as a favored element, but subsequent levels provide no additional elements. Elemental Defense grants resistance 10 versus electricity and sonic, scaling to 25 and at 7th level, elemental movement is replaced with a fly speed that scales in efficiency (including maneuverability). 9th level nets Thunder Blast as bonus talent (full CL) and may now use destructive blasts dealing sonic damage, in spite of the Energy Focus drawback. While I am not the biggest fan of the Elementalist class, I really enjoyed this unique archetype – kudos!

The second one would be the Hekatonkheires Symbiat – and I have to come clean here: One of my favorite, gory, smart and disturbing anime is Elfenlied. I actually have the boxed set here. Well, the briefest means of describing this archetype is “Elfenlied – the archetype.” The archetype gains the Telekinesis sphere as a bonus magic talent and treats symbiat levels as CL for the sphere, replacing mental powers. At 1st level, the archetype gains Thousand Unseen Hands. This works as follows: The hekatonkheires gains Mind Limb as a bonus feat, but gains +1 limb, both of which may be used via the same swift action and are capable of handling and manipulating items. Their reach is increased by +5 ft. and at 3rd level, the archetype may use said limbs as slashing damage-causing secondary tentacle attacks governed by Casting Ability modifier instead of Str, with increased size NOT increasing damage – kudos for catching that! At 6th level, these limbs may wield weapons and receive increased damage-output that increases again at 12th and 15th level, while additional limbs (which fall in two categories, strong and small mind limbs), reach and increased effective Strength with them are covered. This replaces psionics and 20th level provides free action, truly devastating mind limbs instead of Greater Psionics. Absolutely AWESOME archetype – kudos!

The armorist class may elect to become a Soaring Blade, who is proficient with simple and martial weapons and light armor and may only use telekinesis in conjunction with equipment summoned via Summon Equipment and Bound Equipment. This drawback may be bought off, but you only get full CL= class level in instances where the drawback would apply – basically, this is the telekinetic fencer/item-controller and as such, he may conjure fort equipment in telekinesis range – it is btw. here that oversized equipment as mentioned in the beginning of this review, becomes relevant: In contrast to regular armorists, these guys have a reason to conjure forth equipment. Dancing Weapons and increased AoOs per round with telekinetically wielded weapons are gained and the tricks further expanded by Divided Mind and Orbit. As a minor complaint: The 5th level House of Blades ability is not properly formatted. It should be noted that soaring blades may not select the heavy armor, movement or tower shield tricks, but the armorist does gain 8 new tricks…and they are pretty cool: Whether it’s setting weapons to orbit you or calling forth a barrage of phantasmal blades, the tricks are cool and complement another well-crafted archetype.

The last archetype herein would the Unseen Horror thaumaturge, who is always accompanied by a lurking, unseen force gained at fourth level – invisible and capable of doing minor manipulations and moving options, replacing 4th level’s bonus feat. At 8th level and every 4 levels thereafter, the thaumaturge may select one of 8 sample augmentations for this force instead of the usual bonus feats – whether it’s very limited skills per level, increased Strength-score, gaining a second one or one with serpentine properties – a nice one for flavor, I guess.

Of course, the pdf also features quite an array of different feats available for your perusal: Beyond the usual +x class ability feats, the chapter introduces Protokinesis-feats, which let you apply telekinetic powers as innate SPs with a CL equal to you class level and an indefinite duration. They do not work while you’re unconscious, but allow you to stand on e.g. thin objects that would otherwise be unable to support you, move on walls or ceilings or generate aforementioned mind limbs – these feats are awesome. Modifying telekinesis with enhancements or creating items of telekinetic force via overlap with the creation sphere similarly are cool tricks. I also like suffusing illusions with telekinetic force or swift action-based telekinesis-supplemented physical boosts. Similarly, the new traits, which interact well with drawbacks etc., constitute a well-crafted addition to the options presented herein.

Of course, there also are a lot of new talents for the Telekinesis sphere: Whether it’s calling items to hand, accelerating, catching projectiles sans readying actions or shifting gravity (including information on heavy and light gravity) – the tricks herein are rather inspired and versatile and provide A LOT of tactical depth: Missed with that bludgeon? Well, if you have Homing, you can expend an immediate action to have the bludgeon circle back to the target. Want objects orbiting you? The option is here. Levitate objects or creatures sans seeing them? Kinetic Sense is what you require. And yes, you may even mimic simple tools. Glorious chapter!

The advanced magics section allows you to nail creatures or objects in the air…permanently! Wanted a Darth Vader grasp? Talent’s here. Did you always think gravity was something for wusses or that your character should be its center? Well, objective and null gravity are options you have via gravity manipulation. And yes, even telekinetic puppetry of creatures is covered. 7 rituals and two awesome incantations further complement this section: The second incantation btw. allows you to make a ruined keep fly. Yes, AWESOME!

The equipment-section also deserves special note: Whether it’s Arcsilver or the other two special materials introduced, they are pretty cool. Now the arcing property is pretty nasty – applied only to ranged weapons, it allows the weapon in question to describe a 90° turn, treating said turning square as the proper one for cover purposes. At only +1, I can make rather nasty combos here. Nice: Flying thrown weapons allow you to make full attacks at range, somewhat validating the often neglected thrown weapons. (And yes, don’t use this with hurlers…but then again, those builds are brutal, so I won’t hold that against this one…) The 5 specific magic items provided are similarly well-crafted and generally can be considered worthwhile.

Editing and formatting are very good on a formal level, but there are some deviations from standardized rules-language. Layout adheres to Drop Dead Studios’ two-column full-color standard. Artwork-wise, there is a solid mix of new and old full-color artwork and the pdf comes fully bookmarked for your convenience.

Author Amber Underwood has done an impressive job – first of all, this pdf clears up the problems with regular telekinesis. That, in and of itself, would already be an impressive feat. Adding unique and evocative options beyond that…well, that’s where this starts to become truly impressive. Particularly considering that this is the first supplement I’ve seen Amber Underwood tackle, the mastery of complex rules can be considered impressive. In fact, this whole pdf is pretty much seal-material, with the notable exception of the item-chapter, where multiple options go beyond what I’d consider appropriate for the respective power-levels. Granted, high-fantasy groups will not have issues there, but in the context of more gritty campaigns, some of the tricks here will prove to be problematic. My final verdict, considering the superb quality of a majority of content herein, will hence be 5 stars. If you’re playing a relatively high-fantasy campaign, consider this a universal must-buy; even gritty round should get this, but take care regarding the items.)

You can get this cool Spheres of Power-expansion here on OBS and here on d20pfsrd.com’s shop!

You can support Drop Dead Studios making these cool expansions here on patreon!