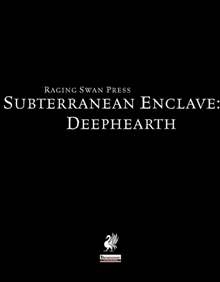 Ask and thou shall receive. When I complained in my review of Mith’Varal that an underdark coastal town would have been awesome, I hadn’t read this. Yeah. Tied it once again at the endless sea, this time around we receive an underdark coastal town – or rather it, was. Until recently, an earthquake has blocked access to the endless sea…and then, the disappearances began in the small community of svirfneblin…

The village itself sports a selection of rather delightful morsels – from a petrified, hollowed out mushroom (which houses the temple of the village) to the recently created land bridge, there are quite a few things to see – including a svirfneblin who has literally worked himself to death, trying to reopen the channel to the endless sea. And indeed, at closer scrutiny, the council of Three who is ruling the place seems to be a bit inconsiderate towards their populace, up to the point where one may assume that there is some other reason beyond obvious economic concerns for the dwarves-hating community to try to re-open access to the sea…

(And no, I’m not going to SPOIL whether there is, and if yes, who is the mastermind behind this village’s plight, but I do consider it a well-executed take on a rather old trope.) We also receive full stats of one particular…inhabitant…of the place…in the loosest of terms and the interesting, peculiar lighting conditions – there is none. Darkvision suffices the gnomes, hence your PCs better bring light…then again, they’ll be VERY easy to spot in the featureless dark…and who knows who or what may pick them off…)

Editing and formatting are top-notch, I noticed no glitches. Layout adheres to raging Swan Press’ two-column b/w–standard, with superb cartography in b/w. As always, you can download player-friendly maps on Raging Swan’s homepage. The pdf comes in two versions, one optimized for screen-use and one optimized for the printer, with both being fully bookmarked. Cartography, as always with Tommi Salama’s work, is downright awesome.

Brian Wiborg Mønster’s Deephearth should, by all means of its components, elicit at best a “been there, done that”-yawn apart from its geography. It doesn’t. While I’ve seen the components before, their execution is more than solid and works rather well – the little tidbits coming together manage to make the settlement work better than it would have a right to do. Still, when compared to previous installments, it feels slightly less unique in its conflicts and context. Hence, I will settle for a final rating of 5 stars, omitting my seal of approval only by a margin.