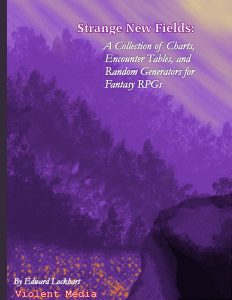 This collection of charts and generators clocks in at 12 pages, 1 page front cover, 1 page editorial, 1 page blank, leaving us with 9 pages of content, so let’s take a look!

The first page of this pdf contains name-tables – 10 male names, 10 female names, 10 last names and 11 over the top fantasy names for males and females with the 12th entry of said table denoting “roll twice and combine”. From an internal consistency point of view, it’s a bit weird to see the regular name table clearly distinguishing between male and female names in two columns, while the fantasy names separate male and female sounding names with an “or” – but that just as an aside.

Page two provides 6 troublesome treasures, which all come with sp/gp/xp values, though the latter are 1:1 the value of gp, which may upset some particularly ardent champions of “their” OSR-ruleset. These also are very powerful – 5K for a mace+4 whose wielder always acts first? SERIOUSLY? 4 unusual reasons to wander are more interesting, ranging from having denied a fey lord hospitality to now be cursed to wander and bring strife to…the very common blood oath of vengeance versus immortal wizard xyz. Somewhat weird – this one capitalizes a lot of words that shouldn’t be.

The next page contains 6 unique holy symbols, including decent visual representations: Festering, molded wounds, ropes of twisted hair or the tooth of a dead man…interesting choices here and the first table ended up enjoying, even though capitalization is once again somewhat inconsistent. 8 interesting locales are next and range from a rock, where faeries may mend broken metal objects or a weirdo berates the PCs for not understanding how noble the way of the goblin is…

I also liked the 12-entry “strange payment”-table, where the PCs may be awarded a thief’s courage, a father’s heartbreak or similar abstract things…or water stolen from a sacred well. Worthwhile contemplating! The next page represents the first true generator herein, one for stronghold events: You roll a d8 and then check a sub-table: 4 plagues/floods can kill off population, there are 4 burglary severities and there would be visitors/raids: d6 determines the descriptor, 4 the typo of visitor. If there was an assassination, it occurred similarly d6 days ago and harvests also come in 4 entries. Decent, if very minimalist fortress event generator – I have seen better. (Plagues, in particular, will potentially quickly wipe out the population with 2 unlucky rolls of the dice.)

The 10-entry-strong table of “what finds you in the wilderness” would, once again, be a pretty nice ones, with the 7 deadly sins as well as nothingness, fear and beauty making for metaphysical experiences of a rather dream-like nature that are particularly suitable for excursions into the realm of dreams, the fey realms or similarly mutable places where places where shepherds with kingly jewels and the like could make sense, where greed making these riches never quite enough has a tangible draw.

The 20-entry strong table on why a monster wanders has a more universal appeal, but similarly is not as captivating. still, with gone fishin’ and monsters currently…ahem…relieving themselves, it can result in some uncommon encounters.

The final table is titles “The Entity requires strange rituals or has inscrutable demands.” and represents basically an easy generator – 40% chance for ritual required, 50% for a demand, 10% for both. You take the sentence: “First, ___ yourself ___ the ____” and roll d4s for each blank. Alas, the results can become…awkward, and not in a good way: “First, abstain yourself with the blood…” is for example a valid result here. 6 rituals and 6 demands are provided, to follow after the previous sentence-fragment. These are interesting and include only moving towards one cardinal direction for a week, for example. Similarly, the demands range from the traditional beautiful virgin (The pdf acknowledges the entity to be a traditionalist) to the character’s immortal soul. NOW. However, it’ll be returned, on credit even! A mixed bag table.

Editing and formatting is still okay, considering the PWYW-nature of the pdf. Layout adheres to a 2-column or 1-column color standard, depending on the tables. The pdf doesn’t have bookmarks, but does not necessarily require them- Artwork, where present, is either solid for PWYW or stock; still solid for what it is.

Edward Lockhart’s table-collection is decent enough, considering that it’s PWYW. The metaphyiscal “what finds you”-table is nice and while others are pretty basic and not too exciting, and while there are some hiccups in the details, as a whole, this does contain a couple of gems for idea-scavenging. The pdf is probably not worth printing out, but for a quick idea-scavenging, it may be worthwhile checking out. Now, granted, the title is misleading – this is basically a chaotic miscellanea of tables and that’s it…and, for the most part, it’s not strange…but as a PWYW-pdf, this is relatively decent.

And…honestly, I don’t have more to say about it. If you’re not willing to pay for some of the more detailed, focused generators out there, this may be worth checking out and leaving a small tip. If some of what I noted interest you…well, you can download it. Compared to many of the better generators/miscellanea-pdfs I’ve read, this feels unfocused, and the generators presented…have some minor hiccups. I feel like a jerk for doing so, but considering the quality of these generators and how strictly I tend to go to town on them, I can’t rate this higher than 2.5 stars, rounded down for the purpose of this platform…in spite of being PWYW.