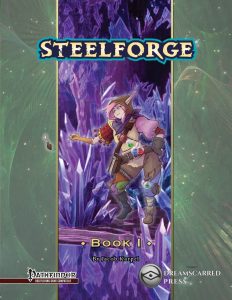 The first installment of Steelforge clocks in at 16 pages,. 1 page front cover, 1 page editorial, 2/3 of a page SRD, 1 page advertisement, leaving us with 12 1/3 pages of content, so let’s take a look!

After a brief foreword by the authors, we dive right into the respective items contained herein and the first item-class already makes pretty much clear that this is NOT a standard magic item book – we begin with 3 inexpensive types of auto-loader magazines for crossbows. What do they do? Well, they make crossbows on par with bows. Thank you. That being said, I am a more than a bit weary of the ability to copy enchanted bolts in an infinite capacity – once you insert a bolt, the magazine copies the bolt’s properties on other bolts contained herein – insert mundane bolt, add one powerful magic bolt, get infinite copies of the powerful bolt. This would be utterly broken, were it not for the VERY smart caveat of it being impossible to taking any bolts out of this magazine sans destroying them, putting a hard cap on the number of bolts you can copy. This catapults the item class immediately from problematic to all awesome. Chest-slot-assigned natural armor enhancers, corsets that enhance your saves, girdles of protection and the like can also be found here.

In case you need that spelled out: The items here utilize other slots than e.g. the standardized slots – which may be a blessing or curse, depending on your take: While I really like the fact that now cloaks and rings aren’t necessarily occupied to make the high-level math work, this also allows for some optimization tricks that weren’t possible before. Since this issue is pretty much system-immanent, I will not penalize the pdf for it. That being said, I did notice an uncharacteristic glitch: The construction prices of the aforementioned corset are equal to the market prices, which is an obvious error. (As an aside: I do believe that prices could have been used to account for the value of the respective slots and some balancing here, somewhat offsetting the gained flexibility, but I digress.)

This is not all, though – hate seeds allow you to utilize the dread’s paranoia terror (cool!) and ironbody cloaks contain temporary hit points, which help in particular to offset the squishiness of some characters at high levels…or in high damage output games like those employing Path of War or similarly optimized characters. Headset-style earrings are damn cool and tie in well with collective rules and dimensional anchor nets have been a staple in my games for a while – nice to see them represented here as well! Seriously underpriced at 12K, Steelwalker’s Boots may add to the flexibility and flow of combat by allowing 1/2 movement in conjunction with full attacks, but they also cheapen all skirmishing builds I know. I’d hate this item like crazy, were it not for the fact that, unless you actually hit, you are staggered, making this a high-risk/reward item I actually ended up liking!

There is also a nice take on transferring magic enchantments from items to items (somewhat akin to Interjection games’ glyph wrappings).

More important would be the highly versatile charming trinket-systems: There is a bracelet and necklace that can each hold charms, with a ton of them provided in two groups, included upgrades for Claim-limits, ki points, etc. Nice customization array, though its flexibility and low price point, while cool, may not be what every GM is looking for, they do sport some serious value.

This is not all, though: We are introduced to the 3rd-level flightbreaker spell and the absolutely glorious endeca’s gregarious gravity slime: Somewhere between intelligent slime and item, you rub these slimes on weapons, attack foes and watch them do their magic. The slime is AWESOME and evocative and comes with a rather cute artwork. No complaints.

The pdf also feature the gravity slime master PrC, which covers 5 levels and adds a total of +3 BAB and Ref/Will-saves as well as two levels of class feature progression, d8 HD, 4 +Int skills per level. As a minor nitpick, Dreamscarred Press has established a time-frame in concrete time for per-encounter abilities that is not reprinted here, in spite of the PrC using such mechanics. The PrC can launch damaging, DR/resistance-ignoring untyped damage dealing gravity slimes at foes – while I have no balance concerns here, I still wished it wasn’t untyped. The gravity slime master also receives a gravity slime guardian at first level, basically a kind of variant eidolon that gains a series of free evolution, but no pool of its own or magic item-sharing with the master. And yes, at higher levels, it gains more evolutions and can act as a mount. The gravity slime master’s launched gravity slimes get additional, hampering effects at higher levels and starting at 3rd level, this impact ability extends to gravity slimes added to weapons. Really evocative little PrC.

The final chapter of the pdf covers a topic near and dear to my heart: Combating the Christmas Tree syndrome. This section pretty much is worth getting the pdf on its own. Why? Well, while most of Dreamscarred Press’ recent offerings have been geared towards high-powered gameplay, this chapter will provide a ton of benefits for pretty much all groups I can think of: Rare/Low magic campaigns can employ it and its massive table to codify the value of saving throw bonuses, armor class bonuses (by type) or resistances to be added to items, allowing for customization of more unique items and adding their benefits. Since the enhancements are listed in steps, they do take the slot component into account. This section is pretty minimalistic, yes – it basically covers the must-own enhancers to make the math come out right. I absolutely love it. The section is made primarily for GMs and can prove to be extremely helpful when pricing items that feature these options among others – from legendary items to legacy items, these humble two pages will see A LOT of use in my own game. One note, though: In spite of the non-stack caveats and very precise presentation here, I’d suggest GMs keeping a tight control over these rules, since, again, system-immanently, the added variety does allow for combos otherwise impossible. This is very much a feature in 99% of the cases, but it can be a bug, in spite of the section doing everything right.

Editing and formatting are top-notch on both rules-language and formal levels – with the one exception regarding prices mentioned above, but that one is pretty obvious as well. Layout adheres to an elegant 2-column full-color standard and the pdf comes fully bookmarked for your convenience. Additionally, it comes with a second, more printer-friendly version. Kudos for going the extra mile there!

The authors of this pdf Jacob Karpel, Jade Ripley, Anthony Altovilla and Forrest Heck have crafted an intriguing pdf here: All crunch, steelforge’s first book is not a traditional item book; instead, it could be best described as a design-paradigm toolkit that provides item-options and tricks to customize your game. More importantly, several of its items address some gaps in the system; in particular, the temporary HP granting items can be a true blessing for high-powered gameplay. Other aspects of the pdf provide increased flexibility for magic items, interesting variants and options as well as some serious designing help for DMs looking for an easy price-cheat-sheet for the modification/design of legendary/legacy weapons or an end to the Christmas tree syndrome, making this pdf a valuable asset for lower powered games as well. That being said, considering the nature of this pdf, I do believe that some guidance for GMs regarding the ramifications of introducing some contents herein would have been helpful: This is basically a massive engine-tweak, but it does require a bit more understanding of the consequences of adding the content than I consider necessary. While this does mean that the pdf remains very focused on the crunchy aspects, it also makes it a pdf that requires some serious thought on behalf of the GM on which options to employ in the end.

It should be noted, however, that thinking about this is rewarded; Steelforge’s Book I has some truly glorious ideas and the gravity slime is a cool concept that can, engine-wise, certainly be expanded in future releases. I consider Steelforge I an excellent book that only misses my seal of approval due to the fact that it, as more of an engine-tweak than a traditional item book, could have used more didactic guidance for less experienced GMs. Still, consider this well worth getting – my final verdict will clock in at 4.5 stars,. rounded up to 5.

You can get this handy toolkit here on OBS!