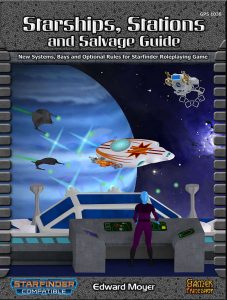 This review was requested as a prioritized review at the request of my patreons.

So, this supplement begins with new spaceship frames, beginning with anthropomorphic/zoomorphic spaceship frames ranging from Tiny to Medium; the supplement notes that the Tiny frame acts as a power armor in the character scale – but, unless I am sorely mistaken, Starfinder’s core rules do not have power armor as a codified entity; this may be intentional, though, as we can probably assume that rules for them will be introduced sooner, rather than later. Since there are a couple of references to this throughout the supplement, I assume this to be intentional.

Anyways, we get minotaur-shaped ships, ones designed to look akin to crabs, raven-ships…and all of these come with at least one or more fully realized maps/floor plans. The next different frame type would be living frames, which need to be sustained and may, conversely, starve – think Lexx, for example. The sample ships here include a nice racer, but unlike pretty much all maps herein, the ship’s map has no grid. Tardegrade and scarab-based ships certainly make sense and make for a cool and somewhat icky theme that I really enjoyed. The map quality for e.g. the scarab-ship is rather impressive. In a nice callback (sans IP, obviously) to the classic Illithiad supplement, we also find a Nautilus-based ship here…which btw. sports 7 (!!!) decks – all as full-page, full-color maps!

Following the theme of spaceshifts that are alive, we go into Necropunk-ish territory, with undead spaceship frames, with 5 different frames provided and 4 space ships with full stats and, once more, lavish full-page maps – what about for example, an oxolotl-shaped ship? Yeah, that’s pretty cool as far as I’m concerned!

Now, the pdf also mentioned salvaging, and considering how important that aspect is bound to be in a scifi-setting, this definitely constitutes an important aspect to be filled. A total of 7 frames are provided for your edification, with 5 different sample ships, once more fully detailed with full-color maps, are found. Speaking of which: A full chapter is devoted to the details of salvaging materials: Beacons and how to access them, haul-in and on site salvage operations – the chapter is enjoyable and uses different tackles to provide an edge for the respective pilot. That being said, the rules otherwise are pretty nifty and I assume this to be the catch-all term for e.g. engineering auxiliary thruster drones providing a bonus to tackling…though, once more, the concept is somewhat hazy and e.g. the bonus they convey to Piloting is unnecessarily untyped, when it should probably be typed. I am not a fan of the ship grappling system being based on swingy opposed rolls, when Starfinder favors a fixed value as DC. The rules here are generally well-crafted, but the sequence of their presentation could imho be a bit tighter – there is no unified table for salvage tools and salvage/repair bays, which makes handling of this section slightly more awkward than it should be.

Speaking of expansion bays: The pdf devotes a whole chapter to the topic and notes tonnage and space in its own chapter. Expansion bays cost btw. 25% of the original frame, capping at 1 per size level, but they also reduce thrust by 1. Several variants of drop pods (with a fully mapped one), and from accelerator launch bays to advanced scanners to increase passive scanning range, brigs – the material covered here is great, even if the exact verbiage isn’t always perfect. “[…]that has an increased security system of DC 35[…]” is somewhat clunky and obviously should reference the Engineering skill; this does not break the book, mind you, but such hiccups, including some formal ones “maybe” instead of “may be” crop up throughout the book – a nitpicky editor would have helped polishing the like. Really cool: With a lich core, we have an engine that subsists on the lifeforce of the living, but references some rules that I couldn’t really reverse-engineer. I assume that, to a degree, they were once codified and have been lost there; we also have halved damage that probably should account for weaponry that extends to the ethereal, considering that that’s the justification. Now, don’t get me wrong – I complain about this kind of thing because I actually really like the scope and ambition of this book. There are a ton of things regarding ship customization and themes that this tome covers, which have so far been absent. The potential of this book is vast.

Want an example? Well, what about a shadow drive, which is powered by negative energy and comes with a table of strange oddities that accompany this drive? There also is a little table of updated critical effects, and we get rules for space stations, codified as tier 21, with a massive 1200 station build points! To account for the vast size, we get Colossal expansion bay rules as well as super weapon rules…there is quite a lot to love here and I’m most certainly going to tinker with these; as a fan of Gundam etc. and several scifi anime, the theme of space stations with hyper potent weaponry are something I enjoy. Anyways, the book also sports a pretty massive equipment chapter, which also offers new material for characters: Spider-shaped exploration drones, gravity shields that reduce damage dies by tier, which adds a bit of interesting rock-paper-scissors to the weapon type. Like that!

The book also contains a lot of really cool hazards – from asteroid showers to cometary trails, explosive shockwaves, straddling black hole event horizons, etc., this chapter provides a little treasure trove of tweaks for the GM to enhance encounters. An optional rule for decompression is also pretty interesting. The pdf also provides a brief, three-part adventure-sketch, though I wasn’t particularly keen on it – it’s pretty straightforward and mainly a way to showcase how to use the book.

This is, however, still not where the book ends: We get a massive ship reference chapter, (including even more full-page full-color maps!) which also features multiple high-level NPCs, and the final bestiary contains not just space liches, but also a couple of starship-sized monsters, including ginormous space worms, several properly realized drone stats, etc. I noticed a couple of hiccups in the stats, though. This chapter also presents a variant of the kitsune race for Starfinder, but the presentation here deviates significantly from the standard, with feats particularly not even remotely adhering to any Starfinder formatting conventions, Spell references not italicized, and a power level that exceeds the core races.

Editing and formatting are okay; the massive book sports quite a few formal hiccups, and unfortunately, some of these have also reached into the rules-aspect of this book. The book is a VERY crunchy tome, and for these, precision is pretty important – and, don’t get me wrong, for the most part, the book is actually really precise and well-crafted. At the same time, there are deviations from how SFRPG usually handles some aspects of the game, and this, alas, can be found here and there, which is pretty jarring in contrast to the often interesting modifications and obvious knowledge the designer shows. This duality extends to the aesthetics-department: The 2-column full-color layout sports graphical elements that are pixilated on the borders and the artworks…well…they…exist. Some are solid (mostly those for mechanical things), but the majority are not exactly beautiful. At the same time, the cartography is so expansive it’s a joy, and the quality of the maps is significantly higher than either layout or artworks. In fact, with the vast amount of maps, this may well be worth the asking price for the maps themselves alone. Anyway, the pdf comes with bookmarks for the individual chapters, but not for specific ships or maps, which makes the navigation slightly less comfortable than it could be.

Edward Moyer’s massive tome has me torn as a reviewer. Not because of the aesthetics, mind you. I always advocate substance over style, and the pdf frankly provides a ton of bang for your buck. I’d rather have content than shiny stuff. On one hand, I loved a lot of the material; on the other hand, it is pretty evident that a really picky rules-developer or-editor would have made this massive tome a must-have book; as presented, I couldn’t help but consider this to be a bit less refined than what I’d have loved it to be. Considering the complexity of the Starfinder ship-rules, the sequence of presentation of the material itself within the book could have used a bit of restructuring. Do not misunderstand: As provided, this is a massive grab-bag, and the pdf contains something for pretty much every table, sporting the massive expansion for the SFRPG-rules that fully spaceship gaming can use.

While the editing inconsistencies and rules-aesthetic deviations would make me usually settle for a verdict as a mixed bag, the book at the same time also sports a surprising amount of truly interesting rules components that manage to do interesting things with the engine. Whenever the book’s minor flaws did show, I also found truly fun aspects here that made me smile and think about how to use this. As a fan of weird scifi/space opera, I adored the more far-out tricks herein, and the supplement also features the tools to run essentially a whole campaign (or at least a couple of adventures) based on salvaging. In short, this has a lot to offer. It is somewhat rough around the edges, requiring some modification and care by the GM, but the vast amount of different and neat maps elevates the supplement. As such, my final verdict will clock in at 3.5 stars, rounded up to 4 due to the map quality and the cool material within.

You can get this massive, rough, but inspiring book here on OBS!