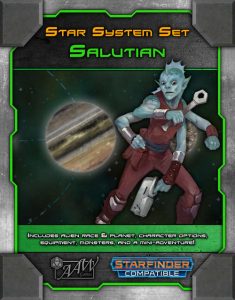 Since I will base my reviews on the collected sets, I will provide an overall conclusion etc. at the bottom. This star system was written in its entirety by Michael O. Holland.

As always, we get a neat artwork that shows all planets and their relative location in the sun system, with the star in question f this system being a yellow dwarf. The planet closest to the sun is super hot, and the one farthest from the sun has a poisonous atmosphere. The Main seat of life here, though, would be Mien, the world of the Lamertans. The surface and jungles of this world are surprisingly deadly, and the lamertans haven’t yet learned the importance of keeping data close to your chest. 4 brief sample fluff NPC-write ups and 2 hooks complement this one. I like the notion of a race recently “abandoned” by their masters, but I can’t really picture Lamerta settlements and the like – they don’t seem to be on the surface, but a bit more detail here would have been nice.

Solid, if not super-exciting. 3.5 stars, rounded down.

The new race presented within this star system set would be the Lamerta, who are Small, 4-armed humanoids with low light vision and a +2 racial bonus to Acrobatics, Computers and Engineering. They also can move unimpeded through nonmagical difficult terrain in jungles and forests, and if they have two free hands, they get their land speed as climb speed. The comparative power-increase the latter represents over e.g. the kasathas is offset by them getting only 2 HP. Ability-score modifier-wise, we have +2 Dex and Int, -2 Con. The race seems to have been engineered by the mysterious Saltu, and the write-up per se is solid. They come with a solid artwork and all sections you’d expect, minus the “Playing a Lamerta”-sidebar that core rules races would have offered.

All in all, a decent race, if not one that really intrigued me. 3.5 stars, rounded down.

Here, we have a new theme, the lawman, which nets +1 to Con, reduces the DC of Culture checks to recall law enforcement/judicial facts by 5 and lets the characters choose Diplomacy or Intimidate as class skill. 6th level nets +2 to Perception checks as part of a criminal investigation, as well as +2 to skill checks of skills in which you have no ranks, provided you undertake the check as part of an investigation. This explicitly does not allow for trained-only skill-use. 12th level lets you 1/week call in a favor for one item or expert service, of up to an item level of your character level +1, and you’re expected to return the goods/reciprocate. Nice one! 18th level lets you 2/day mull over the details or clues of an investigation to regain 1 Resolve Point; this takes 10 minutes and doesn’t qualify for regaining Stamina. One of the cooler themes out there

The second page of this card contains new spells: bio-blast is a level 1 mystic spell that nets a 2d6 acid cone, which leaves a short-lived residue of acidic sludge. Leap is available as a 1st level mystic and technomancer spell, which lets you execute horizontal or vertical leaps up to twice your size sans running start or Athletics-requirements. Technomancers can cast the 2nd level plasma whip spell, which nets you a burning monowhip that you’re treated as proficient with, inflicting scaling fire damage. At 3rd spell level, technomancers can cast energy aegis, which nets +6 to EAC, later upgrading to +8 and +10, at 9th and 18th CL, respectively. Phase shift is available as both a 3rd level mystic and technomancer spell nets a +10 bonus to Stealth and concealment, making this a kind of cross between invisibility and displacement, but at a lesser degree. On a design-perspective, I think that phase shift’s bonus should be tied to the four states of awareness mechanic. Not the biggest fan here.

Verdict: 3.5 stars, rounded up due to the theme. The spells alone would have been closer to 3.

We have three new ships here: We get the Seria tier 1 Tiny fighter, a tier 7 explorer and a tier 9 bulk freighter. Liked these. The section also comes with the wingsuit, which is basically a base-jumping suit, at mk 2 with thrusters (neat!) and defoliant grenades in 4 levels make sense in the jungles of the system. The card also provides a neatly-illustrated hybrid item, the stealth cloak, which does what it says on the tin.

We get two new monsters here: At Cr 3, the Large , green and delightfully-illustrated grunk worm, who sports acidic bile…oh, and hitting it with kinetic damage may splatter slimy blood full of larvae on targets. The worms also get grab. Nice critter, like it! The second critter, also beautifully illustrated, would be the CR 5 Axarak plant. It is superb at camouflage, but emits a telltale methane scent. The plant can roll its own, dead leaves in bizarre leaf-bombs and may root/uproot itself. Damn cool critter!!

This mini-adventure is intended for 4 level 3 PCs, and comes with a nice full-color map. No player-friendly version is included. Really cool: We get two variant/unique-y creatures that are NOT featured on the monster-card! Kudos for going the extra mile here.

This being the review of the adventure section, the following contains SPOILERS. Potential players should jump ahead to the conclusion.

All right, only GMs around? Great! So, a shuttle has actually crashed on Mien, and it’ll be up to the PCs to mount the rescue! As the PCs scan the region and zoom over the jungle, they’ll soon note the wreck – and that the survivors have fled. And the PCs will be in a place to meet the fine specimen that caused the survivors to run…to a temple of the Saltu, where the PCs can find ancient tech, deadly enemies, and finally free the missing crew members. The terrain/temple per se is a bit less remarkable and the final encounter is a bit out of left field, but the bonus critters rock.

Editing and formatting are very good on a formal and rules-language level, at least for the most part. Layout adheres to a nice two-column full-color standard and the collection sports quite a few rather nice artworks – particularly the monsters get neat art. The pdf version of the collected set has, unlike Querritix, no bookmarks for each card.

Michael O. Holland’s Star System is interesting regarding a lot of its premises, though it probably does suffer a bit from the race’s culture not coming across as that interesting. This is somewhat mitigated by the cool critters, but as a whole, I consider this to be slightly weaker than Querritix. My final verdict will hence clock in at 3.5 stars, rounded up due to in dubio pro reo.

You can get the whole set here on OBS!

Want just the Planet? It can be found here!

The class-option stand-alone pdf can be found here!

The equipment-section can be purchased on its own here!