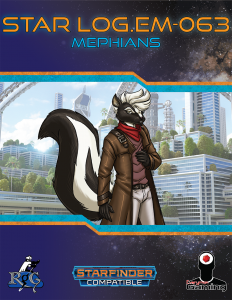 Mephians in the Xa-Osoro system are natives of Terros, a relaxed and community-driven species that has endured their fair share of prejudice, courtesy of their looks and ability to exude a type of musk akin to the skunks they resemble. And yes, get out all your Pepe Le Pew jokes now. 🙂 (As aside, a mephian Casanova with Gambit-esque ambitions was pretty much immediately a compelling character-concept I came up with…)

The pdf presents a mephian subtype graft, but fails to note the subtype in the race’s viral statistics, which is a bit of a guffaw. Mephians receive +2 Constitution, 4 Hit Points, are Medium, and when wearing armor, they gain a +1 racial bonus to AC; while wearing heavy armor, they armor check penalty is 1 less severe. Mephians gain Skill Focus at 1st level, but must choose Diplomacy or Sense Motive. They choose two skills at character creation and add them to the list of class skills; if either is already a class skill, they instead gain a +2 racial bonus to skill checks attempted with both skills. This allows for some seriously potent minmaxing regarding Diplomacy and Sense Motive in particular. Mephians may, as a standard action, secrete a musk and attempt a melee attack against an opponent’s EAC. On a successful hit, the foe must succeed on a DC 10 + ½ mephian’s level + key ability modifier or become sickened for 10 minutes. Creatures with blindsense (scent) or similar abilities suffer a -4 penalty on this save. Mephians, nonliving creatures and those without a sense of smell are immune. Whether or not the target makes the save, they are immune to this ability for 24 hours. After 3 uses, they cannot use it again until they spend 1 Resolve Point to regain Stamina.

The pdf has 2 supplemental feats: Keen Scent nets a mephian with 1 rank in Perception blindsense (scent) 30 ft., and at the same prerequisite, we have Musk Diffusion. This makes the target hit with your musk emit the smell in a 10 ft.-radius or sicken allies for a shorter duration. This gets the musk caveat right.

Now, races, as I often remark, are more than just their rules: As such, this pdf goes into surprising and compelling details regarding mephian culture – the book includes notes on “If you’re a Mephian, you likely…” and “Others probably…” These really made me smile: “Other probably…Are confused when they see you wearing pants.” XD (Fyi, as the write-up notes – the musk glands are in the tail, not in the posterior…) Interesting – while in many regards akin to humans in how they mature, mephians are often bisexual, sporting obviously a different type of community fabric than we do. And yes, I had the gambit idea before reading this tidbit of information.)This is also represented in the cool notion of switching child rearing duties for years on end! In their pretty wholesome and positive society, this actually works and is something the kinds (and parents!) benefit from.  (Mephians also have a genetic propensity for having issues with seeing across long distances, though genetic therapy helps. Still, contact lenses and glasses are common.

Very cool: We get a full vital statistics table, which includes maximum and minimum age, height and weight – love that these are included. The mephians’ home world is btw. unmarred by the dread blood space phenomenon. As an aside – the notes on their cuisine actually made me hungry. Lizard fillet marinated in chilli and spice, served atop rice and befswan, with popling beetles soaked in wine that are roasted until exoskeletons pop? Yes, please! (I actually have eaten grasshoppers and insect-protein burgers IRL – they are DELICIOUS.) Their leaders, btw.? They’re called “councilfolx” – I don’t know why, but that struck me as charming and very much fitting. All in all, it is this section, the culture and flavor that elevates the race to feeling unique and distinct.

Editing is very good on a rules-language level; on a formal level, there are quite a couple of uncharacteristic (near-)homophone/autocorrect glitches herein: “Gland” is referred to as “glade”, we have “tale” instead of “tail” and e.g. “taste of spell” instead of “taste of smell”; no deal breakers, but enough of them to be noticeable. Layout adheres to the series’ two-column full-color standard, and the artwork is nice. The pdf has no bookmarks, but needs none at this length.

Alexander Augunas’ mephians are a cool race – I really like the kind and community-minded skunk people, and there is some serious style to them. The fact that they make great envoys is, of course, particularly funny. All in all, this is a neat race; I’m not 100% blown away by them, but they are charming. As such, my final verdict will clock in at 4.5 stars. If the typos bother you, round down. If you value cool flavor and a race that feels organic over the pdf not being perfect, round up instead. As a reviewer, I feel I have to round down on this one – the musk could have carried a bit more than what’s here.

You can get these cool skunkfolk here on OBS!