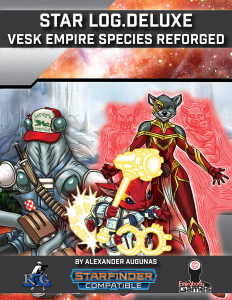 The second of the Star Logs that reforge species clocks in at 15 pages, 1 page front cover, 1 page editorial, 1 page introduction, 2 pages of SRD, leaving us with 10 pages of content, so let’s take a look!

Okay, since I have already explained in detail how the core engine underlying the reforged species works in my first review of this series of pdfs and hate repeating myself, I’ll skip that aspect – the tl;dr-version is that the species behave more akin to how PF2-species work. The universal traits can be taken by the species herein as well – I suggest getting Star Log.Deluxe: Core Species Reforged alongside this pdf.

This pdf covers a total of 3 species in the modular and revised manner, first of which would be the squid-like ijtikris, who can add their ability boost to Strength, Constitution or Wisdom, with the option for a second boost in exchange for a flaw to Intelligence. They get 6 HP, and a swim speed of 30 ft. They are Medium aberrations and get darkvision 60 ft., as well as the ability to move half their land speed while crawling and Kip Up as a bonus feat, which makes sense, considering their physiology. The species has 3 heritages to choose from: You can elect to be amphibious, with the aquatic subtype (explicitly noting that you can still survive on dry land), and when off-kilter, you don’t take the usual penalties or become flat-footed. Alternatively, we can choose a +4 racial bonus to saving throws versus critical effects, and reduce the damage taken from critical hit by an amount of your Constitution bonus + your character level or CR, minimum 1. The third option nets multiarmed (4), but wielding items in more than 2 hands will reduce your speeds.

8 traits are provided for the squid-people: These include natural armor, an extra combat feat, +2racial bonus t a skill and a 1/day SP based on coloring (6 provided), blindsense (scent), the classic jet ability or Minor Psychic Power. Two traits deserve special mention: The first  would be the ability to squirt ink as a move action, potentially blinding, sickening or rendering targets off-kilter. The second very remarkable one lets you grapple with locomotive tentacles instead of your prehensile ones. If you didn’t notice – these do significantly change playstyles, and yes, they are balanced. Awesome!

The second species would be the cat-like Pahtra, who add their ability boost to Dexterity or Charisma, with the option for a second boost in exchange for a flaw to Strength or Constitution. They get 4 HP and low-light vision and can choose either darkvision or blindsense (vibrations). 3 heritages are provided: The first lets you spend 1 Resolve Point to reroll a saving throw; the second lets you install up to two biotech augmentations into a system that already has an augmentation, but doing so costs you 1 Resolve Point (min 0) and imposes a -2 penalty to Fortitude saves. The third heritage nets you both pahtra senses – darkvision and blindsense (vibrations). Speaking of which: While blindsense defaults to a 60 ft.-range (so this is no glitch!), having that spelled out here in the species write-up would have been convenient.

Once more, we get 8 traits to choose from. This time around, we have +2 racial Hit Points as well as Toughness; +2 racial bonus (+5 instead when balancing) to Acrobatics, Acrobatics as a class skill, natural weapons that properly specify damage type (THANK YOU!), the ability to smell diseases (and better Medicine when treating them),skill specialization in skills associated with your ability boosts, a bonus to saves vs. charms and compulsions, including the option to spend Resolve for a reroll 1 round later. Interesting: Standing up as a swift action and no off-kilter penalties/flat-footed plus ignoring 5 ft. worth of difficult terrain that stacks with Nimble Moves – and yes, this lets you guarded step in difficult terrain. Another one lets you spend 1 Resolve Point to grant allies 1 Inspiration Point, capping at 1 + Charisma modifier Inspiration Points granted. These can be used for rerolls, and a creature can only have 1 Inspiration Point at a point, and after spending one, they must take a 10-minute rest to regain Stamina to benefit from it again.

Oh, and know what the third race is? SKITTERMANDERS! 😀

Skittermanders get their ability boost to Strength, Dexterity or Charisma, and can choose a second boost in exchange for a flaw to Intelligence. They get 2 HP and are Small, and receive low-light vision, are six-armed, and have 3 heritages to choose from:  The first represents cultural assimilation, and nets you a +2 racial bonus to two skills chosen from Athletics, Culture, Intimidate and Perception. These become class skills. The second one represents traditional skittermanders and has a similar paradigm, but applies the benefits to Acrobatics, Diplomacy, Medicine, Survival. The third heritage offers the same for Bluff, Sense Motive, Sleight of Hand and Stealth, but only grants one as class skills. To make up for that, the bonus increases to +5 against loyalists of the Vesk Empire. Cool!

The skittermanders get 9 traits: One nets you bonuses to Perception and Profession and may be taken multiple times, increasing benefits; we can also find Improved Combat maneuver (grapple), proficiency with all infinity rifles that upgrades to weapon specialization at 3rd level, (or, alternatively, Weapon Focus) climb speed, or what about gaining +2 racial bonus to one skill chosen from the traditional skittermander list. Obsessive Focus lets you gain Skill Focus and build on it over the levels, and better aid another, covering fire, harrying fire can be found, including a Resolve-powered ability. Of course, the signature hyper ability, including  proper cooldown and cost, is also provided.

Pleasant surprise: The universal heritages included herein are actually all new ones: Planar scion Aphorites can generate crystal dust that nets you 20% miss chance via Resolve expenditure, among other things. Chillborn and Heatborn do pretty much what you’d expect, representing adaptation to extreme environments. You can elect to go for a deep one hybrid heritage, which provides low-light vision, hold your breath and decreases your speed, but grants you swim speed. Nice: This does account for already slow characters, reducing the impact for them. Oh, and of course, you turn into a deep one NPC upon becoming a mature adult…want to play a doomed hero? There you go!  Designer children modify the ability boosts and flaws system to apply to a class, representing being geared towards that pursuit. If you want to play someone from a high-gravity environment, that’s very much possible…oh, and did I mention the option of becoming a skittergoblin, with the exact benefits different, depending on which parent race you build this? SKITTERGOBLINS!! 😀

The pdf closes with 5 additional universal traits, which include additional uses for SPs (0-level spells get more uses); a bonus feat that requires a specific anatomic requirement you must meet ; there is one trait that makes you better while crawling (further upgraded if you’re an ijtikri), guarding smaller creatures (and being able to occupy their space sans penalties), and being a polyglot.

Editing and formatting are very good on a formal and rules-language level. Layout adheres to the series’ two-column full-color standard, and the pdf comes with neat full-color artworks. The pdf is fully bookmarked for your convenience.

Huh, so here I was, happy I had found a glitch in one of Alexander Augunas’ carefully-crafted reforged species pdfs…and then, I downloaded the most recent version and realized it had already been addressed. That’s customer service!

Anyway, in case you were wondering: I love this little pdf. All three reforged species have a distinct playstyle, one or more angles that makes playing them different from other species. It is these tactical angles beyond the sheer customization that I truly adore. Bereft of things to complain about, I wholeheartedly recommend this book to all fans of Starfinder who want more out of their species.

5 stars + seal of approval, given with a smile! Also: This shares the first file’s EZG-Essentials-tag for SFRPG.

Need another reason? One word: Skittermanders!! 😀

Missed the Core Species Reforged? You can find it here on OBS!

Alexander Augunas is currently working on his own game, Eversaga – you can support him here.