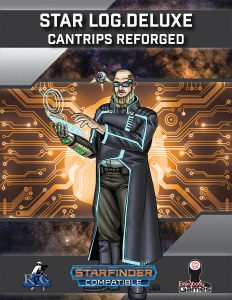 So, what is this? In short, it applies the design paradigm of PF2’s cantrips engine to SFRPG, making them automatically scale with your level. For the purpose of scaling, only the class level in the class that actually grants the cantrip is taken into account for heightening. SP are heightened to 1/3 of the creature’s CR or level, maximum 6th.

Okay, one thing could be spelled out clearer: What about cantrips like daze that are on the spell lists of more than one spellcasting class, how do these operate with multiclass characters, say a technomancer/mystic who has access to daze via both classes? Do they take all levels into account, or do you have to choose the spellcasting class/take the one with the higher CL? The answer is in the text, even though the phrasing is a bit more opaque than I’d have liked: The class you learn the cantrip in is what counts. If you learn daze as a technomancer cantrip, it is heightened as a technomancer spell. (This means that you have to note in which class you learned which spell, which seems a bit unnecessarily cumbersome for me.) That being said, handy glyphs denote whether the cantrips are present on mystic, technomancer or withwarper spell lists.

The pdf goes through the scaling cantrips in alphabetical order, beginning with charming veneer, which provides a minor buff to Charisma related skill checks and lets you once per 24 hours gather information more quickly, with the heightening effect allowing for Resolve expenditure for rerolls. Churn fluid is a GREAT spell for thinkers, allowing you to alter the chemical composition of fluid; in the hands of a good roleplayer, this is a really neat tool. It also brings me to a nice thing to note: We have heightening via +1s, in increments, and thresholds – i.e. if heightened to 3rd level or above. Quite a few of these cantrips sport both of these options: For churn fluid, the regular heightening extends the duration; at 3rd spell level, there is the option to send Resolve to make the duration permanent instead. Cost/benefit ratio represented in an interesting manner here. Another such creative spell would be ghost sound, which later lets you generate scripts to lay out. Now this demands being used for a complex scenario!

There are also simpler cantrips here: Dancing lights increases the number of lights and area affected; daze causes minor untyped damage – and before you ask: Yes, the spell has the proper descriptors to balance the untyped damage. Kudos. Dazzling flare gets increased durations and the means to use Resolve to render targets off-target for a round.

Detect affliction deserves special mention: You see, the cantrip’s diagnostic ability gets new capabilities at each spell level. Detect magic does something similarly amazing: The higher the spell level, the longer in the past may the aura be that you can see – oh, and the area affected also improves. These detect spells are gold, and seriously warrant getting this booklet. Energy ray, not exactly a spell I was looking forward to covering, was also a pleasant surprise, in that it presents an assortment of critical effects as part of its scaling, instead of just attempting to make the damage scale. Damage in comparison to common regular spells btw. checks out. Same goes for the save-based alternative hazard, or the KAC-based telekinetic projectile.

Fabricate scrap is a great one that lets you generate increasing amounts of junk for spells and abilities based on junked electronics. Fatigue sports scaling nonlethal damage alongside higher-level chances of exhausting targets hit – and the mechanics here are clever, as the metric checked is Constitution: If damage exceeds the value, the target is exhausted. Interesting. Mending is nice, preventing abuse with a proper heightening cap and Resolve expenditure required to heal the same construct. Psychokinetic hand gets increased distance, range, etc.

I also love the grave words cantrip: Roll 1d20, flat, against DC 19 when the character touches a corpse: If you succeed, the corpse utters a useful tidbit of information. The higher the heightening, the lower the DC. Neat. Stabilize at higher levels include options to add shield other-ish effects, and at the highest level, even use the spell as a reaction – though at a steep Resolve cost. Yes, this means that frickin’ stabilize may cause applause at the table. The length of telepathic messages and their range can increase seriously. Token spell can be made to last longer and generate more benefits. Transfer charge now lets you transfer charges between multiple objects at once and improvise shock grenades, but the latter is kept in check by requiring short rests to make these overcharge tricks.

Editing and formatting are very good on a rules-language level, on a formal level, there are a few minor blemishes like a missing instance of italics; nothing serious, though. Layout adheres to the series’ two-column full-color standard, and the pdf sports a nice artwork. The pdf has no bookmarks, but needs none at this length.

So, Alexander Augunas’ cantrips reforged ultimately represent a power-upgrade, and as such, send my reviewer’s senses tingling. However, when seen in the context of the damage averages expected at the respective character levels, you’ll quickly realize that cantrips are very much in line with what they should be. This is NOT an unbalanced supplement, and for that, it really deserves serious kudos. More so than that, however, it deserves applause for the instances where the cantrips not simply provide numerical escalations but how they open up new roleplaying opportunities. That’s what really makes the pdf shine for me.

It should be noted that, if your aesthetics include high-level spellcasters being *very* fragile sans spells, this will somewhat mitigate that Achilles heel. If that is part of how you envision Starfinder, then this may not be for you. If you, however, wanted to see cantrips matter more and actually be conductive to roleplaying in meaningful ways? Then you should consider this pdf to be one I can recommend from the bottom of my heart. Considering that this is the very goal of the pdf, my final verdict will be 4.5 stars, rounded up in spite of the slightly cumbersome core implementation for multiclass characters (which is easy enough to tweak), and for the evocative roleplaying enhancers, this does get my seal of approval.

You can get these cool, scaling cantrips here on OBS!