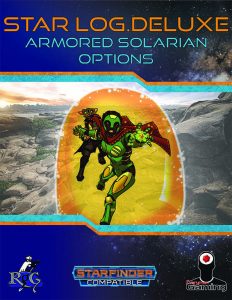 This extended Star Log clocks in at 9 pages, 1 page front cover, 1 page editorial, 2 pages of SRD, leaving us with 5 pages of content, so let’s take a look!

Okay, so this pdf introduces a new item type that should have been in the core book. Know how the solarian weapon is kinda more interesting than the armor? Well, this pdf allows you to customize solarian armor akin to what you do with weapons, via solarian armor crystals. These are hybrid items that can be palced in the solar mote as a standard action. While thus equipped, the crystal provides the AC bonus and attunement benefit when the mote is in solar armor mode. It can’t be interacted with in that form, other than via abilities specifically targeting the mote. Note, that item level=class level +2 is the maximum a solarian can use, and they don’t allow solarians that can’t manifest an armor to do so. (Minor nitpick: there is a “higher” missing in the sentence, but the rules are not compromised by this glitch.) If a solarian has level 5+, inserting such a crystal nets a +1 insight bonus to AC. Below 4th level, the solarian needs to choose between the attunement benefits granted by the crystal and the AC normally provided.

A total of 12 such crystals are provided, and they include a lot of really helpful tricks: We get energy resistance, a heat sink like effect that lets you inflict scaling cold damage, a shield that can prevent limited amounts of damage, short-range standard action dimension door, mirror image  with a  cooldown…and there is a crystal that doesn’t replace energy resistances, instead allowing you to switch between fire and cold, including short increases when being subjected to the energy. Help versus afflictions and traps is also included. A handy table lists crystal prices by level…

…and just that. And here is the one HUGE issue with this otherwise inspired section: Neither the table, nor the crystals themselves note an item level. While an experienced GM may be able to approximate item levels, this does not change the fact that, RAW, this otherwise amazing section is inoperable as presented.

The second part of the pdf deals with new stellar revelations. 5 new 2nd level revelations are provided. The 2 photon revelations are Celestial Guardian, which nets you wisp ally-like effect whenever you gain photon attunement, and these may be fired when fully attuned. Electromagnetic Lash nets a bonus to damage that can’t be applied to solar weapons, and when fully attuned, you may spend 1 Resolve Point as a reaction after hitting in melee to make a technological item, cybertech augmentation, etc. cease working for a couple of rounds. Good catch: This can’t disrupt items that would end off killing the target. Critical effects may be added to this. Very unfortunate regarding the name: Gravity Barrier. This graviton revelation nets Barricade, made from graviton particles, and thus is not reliant on environment. When fully attuned, you can make a tougher barrier. I per se like it – but why, for f***’s sake, does it have the same name as the Zenith revelation released in Star Log.EM: Solarian Zenith Revelations?? *sigh*

Gravity Field lets you move opponents that attempt to move through the threatened area on a failed save. Those were 4 – the 5th is an unattuned stellar revelation, which may be used in either mode and do not count towards determining whether you’ve taken a disproportionate amount of revelations for either. This shield nets you replenishing temporary hit points. Interesting: here, the pdf gets the mode-descriptor right. In a puzzling editing glitch that should have been caught, the pdf tends to refer to the “proton” mode, which does not exist – it’s “photon”.

At 6th level, the unattuned revelation for that range further builds on aforementioned shield, providing different benefits while attuned to photon or graviton mode. For Photon mode, we get photon barrier, which lets you use aforementioned Gravity Barrier in photon mode as well. The one from this book. Not the zenith revelation. The barrier in photon mode does not generate difficult terrain, and instead may be moved around. Retributive Flare makes a creature that hits you in melee take electricity and fire damage equal to your Charisma modifier. I *assume* that this refers to “E & F” as damage type, but it could be read as dealing Charisma modifier electricity damage AND Charisma modifier fire damage. Minor clarification would be helpful.

When fully attuned, you can use the reaction to being hit to scorch foes with more damage, which scales at higher levels. For graviton mode, we get Rebuke Kinesis, which nets you 1 kinetic point for every 5 points of kinetic damage (the physical damage types) you take, with the pool having a maximum size of your solarian level. This is calculated before DR and hardness are applied. You can unleash this energy as concussive blasts, and you can spend all energy as a standard action, dealing 1d4 force damage to all enemies within 10 ft. per kinetic point spent. For every 5 points spent, this also pushes opponents away, provoking AoOs from other creatures, but not the solarian. Really botched Ref-saves can also render the target prone.

Finally, there are two stellar revelations for 10th level+: For graviton mode, we get Gravity Implosion, which builds on Gravity Surge, and allows you to sunder items, reducing energy resistance and DR when fully attuned. Cool! For photon mode, we get Vengeful Corona, which builds on Corona and provides synergy between armor and Corona. Additionally, when photon-attuned, melee or ranged attacks can cause the attacker to suffer the burning condition (1d6 F); fully attuned solarians add their Cha-mod to this damage, but when doing so, become unattuned. Note that this RAW does neither have an activation action, nor limit of uses per round. While the damage is sufficiently low to make this balanced, I am still a bit weary of it.

Editing and formatting are top-notch on a formal level. The same, alas, can’t be said about the rules-language level – the lack of item levels for the armor crystals compromises the whole section, and glitches like “proton” instead of “photon” mode speak of a product that was, alas, slightly rushed. Layout adheres to the 2-column full-color standard of the series with a white background, and the full-color artwork is nice. The pdf has no bookmarks, but needs none at this length.

I wanted to love Alexander Augunas’ armored solarian options. They are something the class really needs, allowing for defense and some soft crowd control. Indeed, in spite of the flaws herein, I found myself really enjoying quite a lot of the options within – the armor crystals are a concept that needs to be expanded. However, as a reviewer, I cannot ignore that about half of the book requires GMs to assign item levels to work. As such, my final verdict can’t exceed 2.5 stars, though the pdf doesn’t deserve rounding down; if you can live with its flaws, it’s an inspired little book. Hence, my final verdict will round up.