Something Stinks in Stilton (OSR) 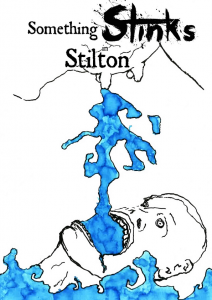 This review was moved up in my reviewing queue at the indirect request of my patreon supporters  – more on that below. My review is based on the softcover version, which is a saddle-stitched softcover with pretty solid and thick paper – particularly the covers are more sturdy than I expected from a ‘zine. Why call this ‘zine? Because it is the unnumbered eighth installment of the Undercroft-‘zine.

This module is intended for level 1 – 3 characters (I’d recommend 4-6 characters and a moderately well-rounded party; particularly a specialist/thief should be included), and is a surprisingly fair offering. PCs reap what they’ve sown, and while death is very much possible, it feels fair. The module has no read-aloud text, and should indeed be carefully prepared by the referee, as it’s a dense module that will most likely happen during a single evening in- and out-game. The module offers only one map, for one of the main adventuring complexes, and no unlabeled player-friendly map is provided for it. The map is b/w and is rather detailed, sports a grid, but no scale noted. If you run this, I’d suggest preparing a map for an Inn, as well as one for a shed. Considering the surprising amount of moving parts and things to interact with, I’d recommend this to the experienced referee.

The module uses bolded red text to allow for the quicker parsing of information (good); magic item formatting is different from the standard, but consistent with how The Undercroft has formatted magic items, and is pretty precise. As is the tradition with magic items in LotFP, magic items are DANGEROUS. The supplement includes a single new nasty save-or-suck spell that I’d generally recommend not fall in the PCs hands, but then again, this module was written for Lamentations of the Flame Princess (LotFP), so very potent low-level magic-user spells are less uncommon. Plus: The referee can relatively easily eliminate this aspect.

This module is almost absurdist in its horror and has a couple of really dark themes, so if horror themes generally offend you, steer clear. This can be heart-rending and pretty brutal; it can also be characterized as absurd and funny in a really dark way, the latter aspects blending with horror into this utterly unique amalgamation.

Stilton is an utterly unremarkable village thorp that once was famous for its cheese. Now, 1730, it suddenly is rising to prominence once more, with everybody craving that delicious Stilton Blue, courtesy of one Cooper Thornhill. The party is hired by the man’s sister-in-law, who is played for laughs as a contact: She is an unpleasant woman, badgers her husband, and while she doesn’t want Cooper to suffer, she hires the party to find out about the cheese’s secret – after all, it’s making Cooper rich. Clever PCs will realize that they are not the first sent on this errand.

En route to Stilton, the party will be attacked by bandits, including a particularly burly one who seems off – a nice introductory battle, and one that doesn’t necessarily have to result in the party being killed: Handing over money etc. is very much possible. Also a plus: What looks like a random encounter actually has bearing on another NPC, who will arrive later than day.

Now, Stilton per se is pretty unremarkable: There’s not much going on beyond “The Bell Inn” here; a hysterical man in prison (whom the party may actually never meet) claims that his wife’s vanished, but the people at the inn seem to be friendly. Okay, cooper’s wife seems to be mentally handicapped, and so is his ox of a son, but the man behind the cheese? Nice fellow. The local food makes copious use of the blue cheese used in Stilton, and indeed, tastes phenomenally – though it does have some weird side-effects: It can make characters tough, but dumber, enhance their sexual attraction to cows, make them gain weight or the like – the cheese is definitely weird, but not that harmful…right?

Well, things turn slowly more threatening among all those nice people, as the storm rages outside and the local scallywag has words with Cooper outside. If the bandits weren’t taken care of, a robbed lady arrives and is given shelter for free in the cow-shed…Cooper seems like a nice man…but his cowbell-wearing, daft son seems to be drawing strange figures into the condensation.

All of this is very British – an almost League of Gentlemen-esque depiction of rural life, including this sense of threat and danger underlying it.

The module itself? Well, it takes place during the stormy night. The PCs are assumed to investigate, and we get a VERY detailed timetable for what happens when, and from the (possibly robbed) guest to the local guard to other NPCs, there is quite a bit of potential for introducing dynamic factors as complications or reprieves for the party. Ultimately, the party will need to secure an entrance to the cow-shed (with Cooper’s key?) and find a trapdoor here – this trapdoor leads towards the small, mapped dungeon mentioned before, and it is here that the horror underlying the pragmatism comes to the fore.

You see, Cooper had two kids: James (the now incredibly strong, but dull man upstairs), and Heather – and they found this ancient complex. Inside, heather found a stone arch and then proceeded to activate it. In a kind of somewhat halfway competent manner. Emphasis on “halfway.” You see, Heather stumbled through the arch, and turned into a grotesque cow-human hybrid thing (illustrated in a rather graphic and disturbing manner); her changed physiology leaking blue milk. When James tried the milk, her turned into an imbecile, and when Cooper’s wife turned into a problem, she also got a nice glass of milk.

The complex down here hides an impromptu shed for the man-cow things…which also get a sort of slow regeneration. The weird meat served upstairs? Guess where it comes from…And the missing travelers? Many can be found here, grotesquely-mutated and often deprived of their limbs. While Cooper cares about his girl (the only cow-thing kept in a human manner), the others? Well, not so much. This becomes particularly evident in the impromptu slaughterhouse, where a half-alive cow thing (once aforementioned missing lady) may convulse while hanging on the meat-hook, spraying blood everywhere. Worse: She was pregnant. When Cooper realizes this, he’ll have a breakdown that clever PCs can exploit…should the timeline provide the angle.

Oh, and the arch? It’s guarded by what happens when you shove a proper cow through – a ravenous and extremely dangerous cow-thing called Daisy, which is a pretty sad combatant; a frightened animal full of pain. The full horror might well become apparent if the party experiments with James’ magical cowbell (which allows for communication with the mooing cow-things), or if they stumble through the arch, for the latter will make the affected see all others as cow things…

What struck me as most effective here, though, was Cooper and his son: He is no scheming mastermind, just an incredibly pragmatic man – a man whose pragmatism has turned into truly gut-wrenching, sickening villainy…and yet, he’s no (totally) inhumane monster.

There are no easy choices here. There is no clean slate or happily ever after regarding the horrors in Stilton. The module covers some advice for PCs trying to contact authorities or the like, and the module can go in quite an array of different directions. The spell mentioned before is btw. a means to transform targets into cow-things on a failed save – permanently. The effects of the milk and cheese, as hinted before, are clearly depicted…and as a whole, well, as a whole, this situation can have vast repercussions for both the party and the world. But unlike many LotFP-publications, these consequences are always the result of the actions of the party, not of a random roll of the dice.

Editing and formatting are very good, I noticed no issues on a formal or rules-language level. Layout adheres to a 1-column no-frills standard with bold red highlights, and the b/w-artwork provided are effective at conveying the horror at hand. The cartography is b/w, sports a grid, and is detail-wise nice, but a VTT-version sans labels would have been nice. Similarly, getting a map for Inn and cowshed would have been awesome.

Oli Palmer’s (to my knowledge) first module is a resounding success. It is novel, featuring themes I haven’t seen executed this well before; it is very detailed, and contrasts its funny and somewhat ridiculous premise with truly gutwrenching horror. It is extremely effective, and I genuinely love the adventure.

On the downside, the cartography could be more extensive – this isn’t particularly convenient for people like yours truly, who suck at drawing maps.

Now, I mentioned an exchange with a patreon supporter before: I was asked to recommend an introductory module for a LotFP campaign that’s better than Tower of the Stargazer. Emphasis on “campaign” – i.e. on prolonged play that embraces high impact concepts, but isn’t all about randomly ending the world.

This module is just that. It perfectly hits the grotesque horror notes, but also features a humor often absent from comparable modules. I LOVE this adventure as a person.

As a reviewer, the map-situation is pretty much my only true gripe with this, which is why I’d usually round down from my final verdict of 4.5 stars. However, at least to my knowledge, this is the author’s freshman offering, and oh boy is it awesome for that! Traditionally, the freshman offering gets a bit of leeway, which is why my official final verdict will round up from 4.5 stars. This also gets my seal of approval for the execution and audacity of the concept. If you don’t mind the map-situation and like horror, consider this a must-buy recommendation right here!

Want print? You can order the print-version here!

You can support the Undercroft-zine here on patreon!

If you can, I appreciate any donations, and, of course, if you can join my patreon, that’d be awesome!