The Secrets of the Iron Titan (Revised Edition)

The Secrets of the Iron Titan (Revised Edition) 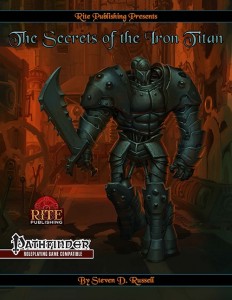 This installment of Rite Publishing’s “Secrets of..:”-series clocks in at 34 pages, 1 page front cover, 1 page editorial, 1 page SRD, 2 pages of advertisement, leaving us with 29 pages of content, so let’s take a look!

As with almost all Rite Publishing books, we are introduced to the matter at hand in immersive in-character prose, here provided by Captain Timothy Woodman – who recounts a tale of high-adventure, of infiltrating the courts of the fey and facing off against a dread golem of legendary proportion. Losing all limbs to the creature, the captain volunteered for the transformation into an Iron Titan. The complex procedure and its repercussions for the body and psyche of the transformed are provided for in interesting prose that should provide a sufficient insight and inspiration to properly portray one who has left humanity behind in favor of a new, mechanical body. Relationships with religion, races etc. – there is a bunch of ideas herein.

The base-class itself may choose any 10 class skills, but receives a -4 penalty to Acrobatics, Climb, Escape Artist, Sleight of Hand, Stealth and Swim-checks. They receive d10 as HD, 2+Int skills per level, a full BAB-progression and have only bad saves. The iron titan begins play with a +2 natural armor bonus that increases by +2 at second level and again by +2 at 5th level and then alternates between increasing the bonus every 3 and 2 levels, for a total of +18 at 20th level. The iron titan also has a maximum number of attacks at his disposal – he begins play with a cap of 2 and increases the cap by +2 at 6th level and then by +1 every 5 levels thereafter for a hard cap of a maximum of 6 attacks. The Iron Titan also sports a construction pool that begins with 3 points and scales up to 26 over the levels, but more on this resource later. Iron Titans only receive proficiency with their natural weapons and do not gain any armor proficiency. Furthermore, they may not benefit from any armor bonus. On the nitpicky side, one could make a case for natural armor bonus being a kind of armor bonus, though that is obviously not intended to be excluded as well – still, the wording here could be more precise.

Type-wise, the iron titan is NOT a construct, but rather a humanoid of the ironborn-subtype (see In the Company of Monsters for more information on them, though the rules for the subtype are provided), which means they can be healed, repaired via Craft Construct, etc. I mentioned the construction pool, which represents the customizations available for the body of the iron titan. Said modifications can be changed upon gaining a level. Attacks granted by customization need to be subject to the maximum number of attacks available and may not exceed those. Attacks can either be primary or secondary natural attacks, with secondary attacks being executed at 1/2 Str-mod and -5, whereas iron titans with only one natural attack instead add 1.5 their Str-mod – concise and conforming to the rules. Iron Titans begin the game with the constructions of arms, legs and a slam attack. At every odd level thereafter, new constructions are unlocked.

The construction customizations available range from costing 1 point to a whopping 12-points and some of them sport minimum levels required to take. The latter of these, the one 12-point construction build, can only be taken at 17th level and above, providing an adamantine body – and yes, this means DR-ignoring, DR and potentially, via synergy, even hardness. Thus, it should be obvious that the general composition of a titan can be upgraded – and yes, there are some interesting choices to be found – beyond the obviously powerful adamantine upgrade, cold iron or lead (which e.g. helps against divination spells) can be had a bargain rate of 1 construction point and still provide significant bonuses; however, one should be aware that obviously, only one such basic composition can be chosen at a given time, though one can, as per the usual rules, change composition at level ups.

Obviously claw and bite attacks as well as darkvision, climb speeds and similar modifications can be found within the pages of this pdf. You may also further increase the natural armor bonus granted by the class or combat the horrendous saves by getting yourself resistances (and at 7th level, immunities) versus energy types and the iron titan can also receive a reflexive damage to weapons that strike him. Poison reservoirs are also pretty nice and the previous wording ambiguities with starting customizations have been eliminated

The interaction/choice of which natural weapon to get is pretty interesting – rending requires claws, for example, whereas slam attacks offer other, additional abilities, and bites allow for trips, for example. Now if you’re not aware of this – yes, the abilities granted by the customizations may be depending on the natural weapons available, but they also offer a plethora of varied monster abilities that do not usually end up in player hands – and for a reason: if they do, said abilities tend to end up in some nasty, nasty builds.

So yeah, the customizations can indeed be used to make some fearsomely effective melee brutes, but at the same time, the iron titan is rather fragile and does not have significant enhancement capacity for the natural weapons it has, so in the long run, this did seem to offset the power-gain provided by Trip (Ex) + Rend and similar combinations. Be aware, though, that multiclass iron titans, when putting their minds to it, can render these combinations very powerful, so be careful when allowing multiclassing or certain combos.

So far, so akin to eidolon-customizations or the aegis, underterror or masquerade reveler, just less flexible, right? Well, kind of, yes, but where the pdf shines is with the unique construction builds – becoming large or even huge are pretty distinct options that radically change how a character plays – note, though, that you should be bring options for size reduction along…or take the squeezing customization, otherwise you may be left standing in front of the complex you’re eager to explore. Scaling breath weapons (with daily uses depending on the construction points spent) and the option to throw imprisoning iron at foes are unique – but what about e.g. stuffing foes into a furnace interior, complete with upgrades for the burn quality and even a blurring shimmer effect? Yeah, wicker man’s got nothing on an iron titan with this one. So that is pure awesome.

The thing that made the inner 7-year-old in me squee with glee, though, would be the transformer ability – from digger forms to alternate forms – vermin, vehicle or animal. These allow for further wildering in the evolutions of eidolons as customizations of the same cost, with base forms gained by the alternate form aligning themselves with those of eidolons et al. I’m am very weary of this, since the crossover can be used to potentially provide rather nasty combos and renders the class’s balance framework vulnerable to outside intrusion, when the ability’s second form and thus, increased flexibility, alone makes for enough benefit for the customization. This customization also obviously changes the free base construction points, meaning you get to re-assign your customization points. The previously problematic wording has been cleaned up.

On the rather interesting side, getting scaling shoulder cannons is just awesome, as are rocket launchers and fist attacks that can be enhanced with significant electricity or sonic damage, with corresponding debuff effects – these unique options are what sets this class imho apart and render it very much fun. Self-destruction is also another star in my book.

Now all of these do obviously not change the vulnerability to magic resulting from the horrendous saves – well, here is the change I hoped for – instea dof providing instant immunity to magic like before, the customization has been rewired to provide scaling SR that upgrades to immunity at a level high enough to make me consider it okay – kudos!

Now on the rather interesting side, iron titans can increase the construction points available by taking construction flaws. Beyond aforementioned customization options, iron titans can have their focus plate, a piece of metal, enchanted as if it were an armor and go into overdrive for a short burst, gaining temporary customizations for a limited duration and multiattack, no longer requiring eating, breathing, sleeping, etc. and similar, slowly gained immunities drive home the concept of the construct-apotheosis. The capstone sees admantine and fast healing compositions added for free and renders the iron titan nigh impossible to kill.

There also are a bunch of feats, from extra customization points to ones that build on specific abilities – there for example is a feat that lest you projectile vomit swallowed foes with deadly velocity – however, once again, the feat does not specifically specify it only works on swallowed creatures – while the text makes it clear that this is the intent of the feat, one can misread it as working for all foes. Feats like awesome blow which usually are not available for PCs due to their prereqs can also be found herein and a sidebar covers the idea of taking a fallen character and rebuilding the hero as an iron titan.

Editing and formatting have been improved in this revised version. While there still are quite a few typos and the like here, the really bad ones have been purged. Layout adheres to Rite Publishing’s 2-column full-color standard and the pdf comes fully bookmarked for your convenience.

I absolutely adore parts of this pdf – the fluff and the unique abilities, the transformer capacity etc. – these are so high-concept, so cool, I *LOVE* them. They may the boy in me squee with joy and represent the strongest points of this pdf – cannons, fists of lightning…heck yeah. I wished this pdf had more of these unique customizations, for they are what makes the class stand apart from similar eidolon-ish classes. Well, that and becoming a huge engine of destruction. I love that this class unabashedly is the transformers-class and Steven D. Russell delivers his usual, high-concept style!

Rite Publishing revises products if there’s work to be done – and it is this service that makes customers come back to them. So yes, this one has been revised and improved. The iron titan still does leave me with some trepidation. I do not expect this to work with obscure multiclass combos; however, the evolution-scavenging is akin to opening Pandora’s box in the long run and should hence be carefully monitored by the DM. That, however, once again is something that can be excused and chalked up to the sensibilities of the individual DM.

The balancing of the class is interesting – at low levels, we have bad saves, potentially vulnerabilities even, versus a death machine in melee; The revised edition has put player-agenda regarding magic immunity/SR higher on the list, which imho makes the overall design more organic.

The revised Iron Titan is a huge step forward for the book – the class is more interesting, better streamlined and now is much, much easier to grasp. The rules-relevant issues have been purged and I gladly deleted lines upon lines of me ranting while writing this review. So is the new version perfect? No, but it is now a fully functional, fun base class that has been purged of the hiccups that plagued its previous incarnation. This increases the rating by +1 star, to 4.5 stars, rounded up for the purpose of this platform because only typos remain as issues and they are not enough to drag down this high-concept pdf.

You can get this revised edition here on OBS and here on d20pfsrd.com’s shop!