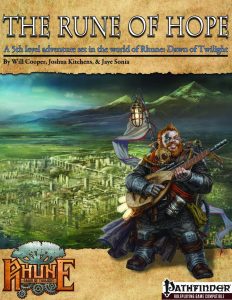 This module for Rhûne clocks in at 87 pages, 1 page front cover, 1 page editorial, 1 page SRD, 3 pages short story/advertisement (actually worth reading!), 1 page back cover, leaving us with 80 pages of content – a massive amount!

All right, first things first: The mythic sidebar/support from “Into the Pale Tower” is maintained herein; if you’ve been playing the anti-tech side of the Rhûne factions (via The Ælven Agenda), then…you’ll actually have a different intro, gaining specialized Aodain Shrouds. While transition from this angle takes a bit more finesse for the GM, it is very much feasible – though perhaps the coolest way to play this would be to play BOTH previous modules with different characters…that way, if one group gets wiped/defeated, the second can pick up the pieces…and if all fails, you can use the PCs from one of the modules as NPCs…Just my 2 cents, of course! If you’ve been using the factions from “Into the Pale Tower“, they won’t play a big role here, though that is bound to change in the third module.

All righty, that out of the way, let’s dive into the module – and that means that, from here on out, there are a lot of SPOILERS: Those of you who want to play this should jump to the conclusion!

Only GMs around? Great! So, while the PCs were trying to stop the plot in the Pale Tower, Northgard has been besieged by the barbarian hordes at the service of the eternal winter – the Thrall Lords are making a big move it seems – and Northgard has been in better shape, with commander Dorthgar and key officers having been afflicted by the dread rage fever…which renders open warfare a problematic idea. In his incapacitation, the commander’s daughter tries her best to hold the ford together.

So, no matter which prequel is used, we can begin- the Pcs are greeted by refugees…and warlike barbarians won’t wait to make their introductions either -sending their famished thralls at the PCs, which should make abundantly clear that these folks and the servants of the Thrall lords in general, should not be trifled with. Finally arriving at the pier where the White Jarl awaits, the PCs will have to contend with the damaged pier and the deadly frigus zombie, who is about to make short notice of the vessel unless the PCs intervene – it is also here that the racial tensions and alien mindset of the automata are showcased, but ultimately, the PCs need to make their way to Northdown on board of the ship – past the plague blockade…and they better survive the thugs sent by Grey Navash…

Knight-Commander Ullsteinnr is not particularly pleased and a combination of Black Hand agent-provocateurs, the nearby hordes and the zeitgeist make Union City not the nicest place to be – the trail that may provide salvation, though, leads to Mikill Bókasafnið (Literally “The Great Library” -love the linguistic consistence the setting often manages to employ!!) – where the PCs will have to explore the complex, searching for a means to deal with the plague…and the magical defenses of parts of the library, so here’s to hoping they don’t torch the place…and the trail leads to speaking with a glitterfane. If the PCs play their cards right, the missionary may yield the correct information – but the trail leads to Caol, several days away…and with time being of the essence, THE airship (remember the lore of The Sun’s Gem from the CS – that’s a HUGE honor!) is the only way…but even en route there, the PCs will have to withstand yet another agent of their foes. The crew down to half strength, the journey on board of the legendary vessel (fully statted!) is not under the best of signs…

…and indeed, if the PCs failed to do their homework, they’ll be up for a rude awakening when clockwork swarms activate on board…and a mutated, ghastly, huge undead swan gorged on necromantic energies also seeks to take down the ship. If the PCs are grounded due to damage at one point, they may run afoul of ælven patrols and indeed, the pdf concisely covers the option for ælves to resolve this before the attack escalates.

The PCs now finally arrive at Caol – and the full-color maps are ridiculously glorious, gorgeous, amazing. Drool-worthy. The alien glitterfane and their glitterswarms make for an…interesting experience…but ultimately, the PCs will have to convince Vella Lightwing, cleric of Alnara, to grant them access to the chalice: PCs should be up to their best behavior, for not only the formal trials posed by the glitterfane must be mastered: The PC’s conduct impacts seriously the support they receive: Favor points are tracked. And yes, there are tricks to the trials of harmony, compassion…and finally, they will encounter glitterfane who are less nice, including a radical renegade oracle…and how the PCs deal with them will make a major impact…and yes, roleplaying is rewarded over just bashing brains in.

Once again, though, the PCs are not at the end of their journey – they will have to brave the wilderness trail (and the lavishly-depicted en-route encounters, complete with glorious full-color maps) to approach Drowned Karthæn, desolate ruins where mutated leshy, decaying tentacles and worse roam the streets of this nightmarish locale -and the PCs have to make their way down below into the royal quarter, which doubles as a creepy, ghostly dungeon, where creature-placement, details, haunts and the like conspire as a great example of indirect storytelling…and have I mentioned the savage ghast raging cannibal? or the mighty skergrafa construct? This section could come straight out of a Dark Souls/Bloodborne-game and that is meant as a true compliment: Have I mentioned the rune-cursed coral colony? In a lesser adventure-series, this act would be a stand-alone module! And the final boss-fight is EPIC. Thus, with the rune Laguz secured, the Pcs will probably want to return post-haste from these darkened halls.

The chalice’s power sends the PCs straight through Nachtland (German for Nightland, just fyi), a shadow-plane like double where the PCs can metaphysically combat the rage fever in a more direct manner…however, the shadowy version of Northgard is inhabited by dread elementals of void and fire…and worse…and yes, we once again get an absolutely phenomenal map – in a version for Nachtland and a regular one – double-kudos. In order to save Northgard, the PCs will have to defeat a horrid giant, who is primed to actually enter Midgard…and tear Northgard asunder with his mythic power.

Still, the aftermath is grim and it seems like Northgard is bound to fall….but how this saga plays out, well, we’ll have to wait for module #3 to determine that!

The pdf also provides stats for the magic items and monsters introduced herein.

Editing and formatting…are actually really good this time around! I noticed no “see page x”-remnants, no hiccups in that way – big plus and kudos for improving that aspect. Layout adheres to a 2-column full-color standard with a white background, somewhat akin to the one employed in Ælven Agenda, but more refined. So yeah, we’re back to a more printer-friendly look than “Into the Pale Tower”‘s sepia-tinted standard. The full-color artworks are GLORIOUS. The same holds true for the copious, lavish cartography. Now, unfortunately, we don’t get player-friendly versions of the maps, but unlike in the previous module, by the structure etc. of this one, that aspect is a bit less jarring – for the most part, you can use the maps presented, go mind’s eye or duplicate them quicker – the absence hurts, yes, but hurts a bit less. Another big downside is something you probably expected: Once again, alas, we get NO BOOKMARKS. This constitutes a serious comfort detriment. We also don’t have a print-option, so yeah, alas, there is no alternative: The best way, at this point, to run this, is printing it out. Here’s to hoping the whole series gets PoD soon! The pdf comes with a smaller lite-version for electronic devices.

Will Cooper, Joshua Kitchens & Jaye Sonia are obviously a winning team. Ben McFarland and Mike Myler provided additional design…and the result is a GLORIOUS module. I mean it. Bringing the two wildly different storylines of the previous modules together is damn cool. The module has a sense of urgency, excellent production values and a lot of different challenges to overcome: Different themes are concisely linked, there is something to be done for every type of character and the atmosphere is generally amazing. This is, in short, a fantastic module.

That being said, the lack of bookmarks and player maps does hurt this a bit…if the module existed in a print version, I’d point to it as the way to go, but yeah – as a reviewer, I have to penalize this for their lack, in spite of adoring the module. Still, considering all, I do still feel like I *have* to wholeheartedly recommend this – which is why my final verdict will clock in at 4.5 stars, rounded down…but I’ll still add my seal of approval to it. I wholeheartedly hope that the Storm Bunnies add the player maps and bookmarks and/or print options, though – I want this whole series of adventures in print!