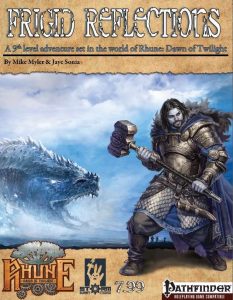 The finale of the „Beyond the Glittering Fane“ adventure arc clocks in at 73 pages, 1 page front cover, 1 page editorial, 2 ¾ pages of SRD, 1 page back cover, leaving us with approximately 67 ¼ pages of content, quite a massive module!

All right, still here? After their hard-earned triumph in the furious preceding module, the PCs are contacted by Knight-commander Erik Ullsteinnr, who shares a rather odd observation – some of the vanquished undead in the recent conflict seem to leave preternaturally cold shards of ice; his concern also has a personal dimension: An old friend of his, the dwarf Skimmr, may be succumbing to the stone touch; thus, the PCs set out towards the town of Utvikle, but en route, they are once again beset by potent foes, namely raiders that have succumbed to the dreaded rage fever! Pretty cool, btw.: Piloting the ship, the chance for the captain to die and information to relay during the journey have all been provided…and yes, sea serpent attack included. This continues one tradition I love about the whole adventure arc – instead of just glossing over transitions, the saga develops them properly, lets them breathe, and thus instills a sense of the vastness and wonder of Rhûne.

The town of Utvikle, lavishly mapped, is certainly pretty, and while the map does have some explanatory notes, none of them represent SPOILERS, making the map actually a feasible choice as a beautiful player-handout. Kudos there! Slightly irritating: The poor dwarf’s name is annoyingly inconsistent throughout the module: Skimmr, Skemmr, Skemmir – while that sort of vowel change is pretty common in Icelandic, I am proficient in the language and the shifts here are not predicated on the regular grammar. On the plus-side, a detailed rumor table and a magical shotgun (Semmr’s Breiða Brótja – roughly: broad/spreading broken-maker) as well as a fully mapped tavern can be found: Huge kudos: The layout and construction of the Wild Breeze tavern has, as a whole, sensible placement of fires and rooms. At this point, the PCs will also encounter the first counter-measure of their BBEG – when frigus zombies led by a juggernaut of blind fury assault, the PCs will have a lot on their plates…

In the aftermath of the attack, the PCs will be contacted by the vitkarr – Jägare (or Jågare – the nomenclature is once more inconsistent), an ice ælf, who seems to know more about the undead – however, during the talk, there is a good chance that the PCs will be attacked by Vorskoi, the glacies vampire – and there is a good chance he’ll kill Jägare…though even if he does, the arrival of a valkyrie may allow the PCs to change the ice ælf’s fate…

The undead horde under the command of the glacies vampire are making their path towards the pale tower…and while the PCs may well choose to follow them, they do have a chance to arrive sooner by cutting through the territory of a mighty giant…and return to the psychosis-inducing pale tower, which may well be a return for some PCs! And yes, the pale tower’s unique effects are included for your convenience. Per default, this section is cinematic as the PCs hack through frigus zombies…but if you have the “Into the Pale Tower”-module, this would be a great way t restock a fully depicted dungeon.

Anyways, as the PCs reach Vorskroi, his machinations bear fruit and the gate opens to swallow the PCs and undead alike, transporting them to Niflæheim, home of ice ælves and realm of all winter! (And yes, if the glacies vampire did fall to the PCs, you’re not in trouble – the pdf provides solutions for this bottleneck!)

“Pff, winter survival is a cakewalk at these levels.” Oh boy, you WILL suffer if you believe that! The winter hazards presented here are BRUTAL. As in: If PCs aren’t smart, they may well be killed all off by the brutal weather! So yeah, turns out that traveling to a world of perpetual, supernatural apocalyptic winter *is* a perilous endeavor! Big plus for capturing that! Now, sooner than later, PCs that do not fall prey to having ice crystals grow on them etc. will find the ice ælves and their settlement…but their reception will be. Well. Cold. In order to be accepted, the PCs must complete 3 tasks (though silver-tongued PCs that drank deeply from Mimir’s well may manage to require less tasks…) – hunting flesks, gathering striking stones ( which is perilous, as the PCs may need to deal with a whole table of icicles waiting to impale them as they mine…) and purging gardens from a rot grub infection all are certainly tasks befitting of heroes.

The grand success and accompanying feast is rudely interrupted by none other than Níðhöggroth, the quasi-deific super-monster of the realm; guess what? Yep, they should frickin’ run. Ultimately, the trail brings the PCs to the ruins of the gelid glacier, where legions of the frostbitten dead await, guarding the ruins of the vast temple of Isa! Within the confines of this majestic temple, a variety of different tasks loom – we once again get a gorgeous full-color map (wished we’d get a player-friendly version to cut up and use as a handout as well…) and the challenges are interesting and breathe flavor: Bells that can emit deadly pulses of sonic energy, flavorful rooms and well-presented, deadly hazards compliment a rewarding dungeon, which focuses on a rather grand plan: Encased in ice, there lies Drittsekk (literally dirt-bag, which elicited a lol from me), bastard of Mhamnoch and super-powerful glacies vampire of Gargantuan proportions; and he may well be set loose, if the PCs bumble. In fact, eliminating the quasi-divine giant-thing may be a good plan…provided they can deal with the already boss-worthy chief in charge of restoring Drittsekk first. The module does provide warnings here: These foes in sequence are EXTREMELY potent and may be just what the doctor ordered against really powerful PCs, so if you usually find your players yawn at the challenges presented by published modules. Start smiling. Oh, it gets better.

Why? Well, if your PCs are so insanely strong they managed to take them down…there is more coming. Níðhöggroth is approaching and interrupts the combat with Drittsekk, to begin picking off targets one by one – the dragon is potent (and THANKFULLY comes with a second, proper and mythic version for all of us who are not content with a regular, deadly iteration) and makes for the last piece in a delightfully challenging, very rewarding final encounter.

However, the PCs are still stranded in the realm off eternal ice…and the ice ælves are running out of options…and thus, the module concludes with an event that may well change the dynamics of Rhûne, as the PCs lead the exodus of ice ælves to Midgard, hopefully escaping the wrath of the nigh-unstoppable dragon…for now…and changing the lands of Rhûne thus!

We conclude this book with various magic items of ice ælves etc., faction missions for the power players of the setting and the frigus zombie and glacies vampire templates, which, as you may have noticed, are used copiously throughout the module.

Editing and formatting are per se pretty good, though the consistency-hiccups, at least to me, are a bit galling and not typical for Rhûne supplements, which usually are pretty good in keeping ås and umlaut-studded äs apart. Most native speakers of English will probably not mind, but yeah. Layout adheres to an elegant 2-column full-color standard and the pdf sports a LOT of gorgeous full-color artworks, though fans of Rhûne will know quite a few of them already. Still, we’re talking about Paizo/WotC-level art here. This is a beautiful book, which particularly holds true regarding the maps. Now, if we also got player-friendly key-less versions for VTTs included in the deal, I’d be 100% happy, but oh well. Speaking of happiness: WE GET DETAILED, NESTED BOOKMARKS! Yes!

Jaye Sonia and Mike Myler joined forces here to write a satisfying conclusion to the “Beyond the Glittering Fane”-saga. That, in itself, is already a feat – you see, ALL adventures in the series so far, and in particular “Rune of Hope”, should be considered to be phenomenal adventures. They provide a wide array of different challenges, breathe the flavor of the setting and feel incredibly…unique. Fresh. Exciting. The first three modules (as the arc has two different first parts!) rank among my favorite underdog 3pp-sagas and frankly, constitute one of my favorite adventure-series all year. The lack of bookmarks, player-friendly maps and the couple of editing snafus did cost them my highest accolades, but it seems like Storm Bunny Studios’ crew is stepping their game up. The inclusion of proper bookmarks is a huge comfort plus in this module.

Now, if you enjoyed the former modules, this has the same level of depth and feels like a consistent continuation, though its focus is a bit clearer; the adventure provides ample variety, though not to the extent of Rune of Hope – instead, it focuses on telling a tale where the PCs get to truly influence Rhûne’s history and its focus thus has a purpose. Since the module does have a few formal hiccups, I will rate it 4.5 stars, but round up for the purpose of this platform. And yes, this deserves my seal of approval. As an aside: If you need some threats and hazards for a REALLY deadly icy wasteland…look no further than this book!

This is also a good chance to talk about the whole saga: It is DEFINITELY worth experiencing! The whole series ranks among the most diverse, multi-faceted adventure series I have seen in a while, and had me flashback in very positive ways to non-anthology-Open Design adventures: There is one consistent, strong story that provides a context for diverse, amazing adventuring. It is my ardent hope that we’ll get a chance to get this series in print, preferably with player-friendly maps and one final consistency editing pass, for the series, as a whole, is phenomenal and indeed, top ten-worthy. Plus, I really, really want the series in proper print.

Anyways, if you can see past the glitches that can be found in the series, then it will most definitely entertain you and yours! The quality of the penmanship throughout is excellent.

You can get this challenging, unique adventure here on OBS!

You can get the two alternate first adventures, The Ælven Agenda here, and Into the Pale Tower here!

You can get the impressive and thoroughly remarkable second part, The Rune of Hope, here on OBS!