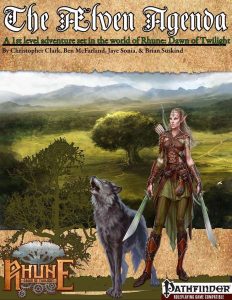 So, what is this? The first, and most simple answer, would be that this represents a first level adventure for the “Beyond the Glittering Fane”-adventure arc. Now one thing I absolutely ADORED in the Rhûne campaign setting would be the fact that the setting demands that you have a proper position in life; that the character has an ideology, a culture…and that with this choice, there are obvious consequences in the way the game is played, the stories are told, etc.

One such central conflict would obviously be the one between the forces that seek to stop the doomsday countdown by abolishing all technology versus those that believe that science is the only chance to stop Ragnarök. The ælves of Ælveheim would be firmly situated in the first camp – this adventure is about the ælven experience, the narrative of these folk and their struggle and as such, it plays different from what you’d expect; I mean, how often have your adventurers stumbled into a fabled elven forest? All the time, right? Well, this time around, you’re playing the hardliner ælves and their allies, not the bumbling fools that stumble into their territory.

All right, this basic premise out of the way, it should come as no surprise whatsoever to you that the following, being an adventure-review, will contain SPOILERS galore. Potential players of this series may wish to jump to the conclusion.

All right, still here? Only GMs around? Great! The tension between the ælves and their relatively easy to defend homelands and the city-states of Vallinar have been a constant for a long, long time; once you add other factions to the fray, you’ll have a worse situation, and one that may well change the paradigms of the conflict: House Scræ is trading corpses with the Fane of Winter in their effort to unleash the dread demon-lord Drittsekk (literally: Dirt-sack/bag in a hilarious insider joke for those proficient in Scandinavian languages); the demonic entity has agreed to provide a horrible poison that mimics rage-fever among humans and also acts as a dread poison versus the ancient trees of the ælves. The agents of house Scræ have secretly infiltrated several western towns and dispersed the dread poison via common moths, increasing tensions, as the ælves witness their trees dying, as the humans whisper of the ælves unleashing rage-fever upon them.

The dreadful and subtle plan is moving into its final phase; the forest is sick, dying even; the last shipment of bodies arrive and worse, an agent of the Black hand, in an effort to join house Scræ, has managed to alchemically enslave a Stygian Elder in a site of a failed ælven portal contained within a barrow. The ælves seem ignorant of the threat; an army of angry townsfolk and mercenaries is amassing and it is only the PCs that stand in the way of catastrophe. Talking about high stakes.

It should be noted that the dreadful Odr-poison mentioned before does feature its own rage and bleed-themed template. Without further ado, a massive introductory text sets the stage, as the PCs have gathered in Hulsil, the northernmost Sil of the ælven people – and the PCs, as agents of weapons and subterfuge, are provided Aodain Shrouds – magical, living plants that help disguise as other races. These are not perfect, though, and have some crucial limitations to bear in mind. When the trees of Moonwalde die, so will the immortal ælves – the PCs are thus sent forth to patrol the shores of Oracle Lake and the borders of the human village of Lakeside…and while ostensibly, there ought to be an alliance/understanding with lakeside, the ælves are justifiably paranoid.

In act 1 of the adventure, as the PCs set forth in the wilderness, the encounters allow for some flexibility for the GM – the encounters presented exceed in detail anything you’d expect in that context – we get signs of the Odr-sickness as dressing; dryads crying blood and diseased squirrels…and beyond such more classic, but lavishly-dressed encounters, there also are non-combat focused ones: For example, freeing an intelligent animal companion from a pit trap via various means can provide an interesting experience focused on creativity. Or what about an automata, lying there, dying, who is slightly delusional and looks up to the ælves, trying in vain to be all they are…and potentially telling them about crucial parts of the conspiracy in place. To kill or not to kill may be the question here: XP and honor, both very important in Rhûne… Beyond these, even the combat encounters come with more detail than you’d otherwise expect, with dressing and sample quotes provided.

And yes, the PCs will sooner or later find the plague wagon, humans all killed by the allied ælven patrol…and here, they may begin deducing the horrible truth behind the plague, provided they do their job well and don’t shirk from the plagued bodies…which the allied patrol takes as proof for the humans being behind the plague…which may well be one step towards escalation….This underlying sense of foreboding doom, of a golden age ending right as the PCs walk through it. A waystation on the PC’s way will be attacked by poachers touched by dread Odr – and yes, the decisions of the PCs matter….this final encounter of Act 1 may actually be slightly easier if the PCs played their cards right…but in the aftermath of this conflict, the trail with point them towards the settlement of Lakeside.

As the PCs approach Lakeside (full stats provided, btw. – including a fantastic full-color map), they will find a peculiar site – the body of a poor woman, who has been killed…as it turns out, by ruffians in the employ of devious Kerrigan. These violent dupes were ostensibly helping against the “plague” spread by the elves via the moths…and hopefully, the PCs are smart enough to question these guys….for if they have caught the dread disease, these guys seem to have had a type of antidote…and Lakeside is now a plagued, dangerous locale…one wherein the ælves walk a dangerous path…if their disguises fail, they’ll be in big trouble…at least with some folks, for there are some that respect the ælves, while others want them all dead. The sandboxy investigation in Lakeside can be really intriguing, covers (even in flavor-text!) the options to disguise or not to disguise. From the negotiation with the Jarl of Lakeside, the PCs will also have options to ask around regarding the burgeoning anti-ælven experiences that seemingly can’t be stemmed by the Jarl, regarding the details of the strange disease…and possible means of curing it. From bunks to personal treasure caches, there are A LOT of different story-threads, legwork and local color to be found, with a ton of great flavor text – even the journal of the aforementioned, slain maiden, which may help put the pieces together, has been reproduced as well. The level of detail is great.

Sooner or later, though, the PCs will have to visit the hospice of the place, though – and sooner or later, they may well be capable of setting up a rendez-vous with Kerrigan, the covert agent of the black hand and his thugs…and from there on, the PCs may have a proper idea of the scope of the dastardly plan in place…but this is not where the adventure ends.

Instead, the PCs will probably stare flabbergasted at the extent of the planned, haphazard invasion force – and once again, the trek through the wilderness does have once again amazing encounters, fully depicted with read-aloud text etc. – we even get artworks of critters, from plague-ridden owlbears to infected zombies, making the really nice. After these, we get one fantastic finale – namely the camp of the makeshift army: The name of the game for the finale of the module, what would be the heart of a lesser module, is amazing: We get a fully depicted, massive and mapped army camp and the name of the game is subtlety – the finale is all about properly sabotage; the PCs have to basically quench the army before it can waltz forth…and yes, each of the locations come with full read-aloud text. The headquarters even come with their own map, making this one of the most detailed and well-made infiltration-scenarios I have seen for Pathfinder. Full-blown Mission Impossible magical espionage. Absolutely adore it and yes, the place does have the same lavish attention to detail we have seen throughout the module.

Editing and formatting are top-notch on both a rules-language and formal level – no complaints. Layout adheres to a printer-friendly two-column full-color standard with nice full-color artworks and full-color maps provided for your convenience. The one big downside of this module would be that there are no key-less versions of the amazing maps included…so my players probably won’t ever get to see those. That’s a big downside for me. The pdf does not have any bookmarks, which sucks big time and represents a major comfort detriment.

Christopher Clark, Ben McFarland, Jaye Sonia & Brian Suskind deliver one amazing adventure of the highest caliber here. The pdf OOZES flavor and absolutely amazing descriptions throughout; even the encounters that would be just one random-encounter-line in another module, here you get a lavishly-detailed encounter with proper read-aloud text, meaningful consequences and better: Detail. The optional encounters always feel deliberate, meaningful and well-crafted.

Beyond that, this module not only sports the usual conflicts solved by rolling the bones, the usual butchering of adversaries; quite the contrary holds true: The module features a lot of deliberate and well-written investigation opportunities, massive ROLEplaying options and the espionage-centric finale is AMAZING. I mean it. This is a diverse, challenging and exceedingly fun module. I should also not forget to mention the atmosphere here: The way in which this module brings Rhûne to life is absolutely inspired.

In short: I absolutely love this adventure. It is well-written, features a rich diversity of tasks for the PCs and makes perfect use of the phenomenal setting. Now yes, the lack of bookmarks and player-friendly maps does represent a significant drawback…but honestly, you shouldn’t let that keep you away from this gem. While they make it impossible for me to rate this the full 5 stars, this module is simply too good to punish unduly; honestly, comfort-level-wise, this should be at least slapped down to 4 stars. However, the excellent penmanship and surprisingly unified narrative voice (4 authors and it still reads like a singular entity!) are a big, big plus; I just can’t bring myself to round down from my final verdict of 4.5 stars and since I really love the diversity and ambition of this module, I will gladly slap my seal of approval on this pdf. This is well worth getting and an amazing first adventure for the setting.

You can get this intriguing module here on OBS!