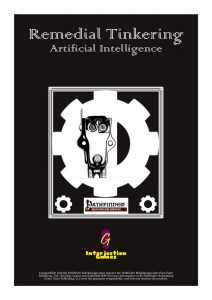 This expansion for the Tinker class clocks in at 6 pages, 1 page front cover, 1 page SRD, leaving us with 4 pages of content, so let’s take a look!

First things first – the expansion does not necessarily require any other tinker expansion to work, and for a reason: It is, in a way, the expansion that focuses most on providing lower level tools, though the content does remain very much relevant at higher levels. As such, the only expansion that has a bit of overlap here would be Happy Little Automatons, which is fyi a really nice one.

This notwithstanding, the pdf does properly explain the different invention subtypes introduced so far in a concise manner. It also presents a couple of rulings that are very much relevant to the content within: BP values assigned represent the blueprints, and as such, once deployed, BP limits are no longer relevant. This is relevant due to one of the new innovations within, Brain Surgeon, which allows you to add a variety of inventions to the automaton INSTEAD of giving a directive upon deploying it.

While we’re on the subject of new innovations: Limited Autonomy lets 3/day an automaton activate an invention of up to half invention level the tinker can learn without being given the directive to do so. The automaton may only target itself or the target of a directive it is given. This allows for some interesting low-level combo-play. Logic Study lets you choose a 1st level invention that requires a directed action to activate. Said invention no longer requires a directive to activate, but when thus activated sans directive, it may, as before, only target the automaton or the target of the directive. These do help make the very tight action economy allow for easier comboing, particularly at lower levels.

Secondly, the pdf does state explicitly that multiple directives can be executed in a given round. One of the new inventions within, big red button, does tie into this ruling. The invention costs 2 BP and the automaton gets 3 fat, red buttons, which it may be directed to push as an immediate action. Each button may be pressed once per day, and they all have an interesting angle: +4 shield bonus to AC, minor self-healing (plus temporary hit points) and a weak shield that inflicts fire and electricity damage on those attacking it can be found. As you’ve seen, the immediate action activation is pretty novel and an explicit deviation from the standard. I like it.

As far as first level inventions are concerned, we can also find the amplification array, which is pretty cool: It fires a burst of motes that per se do not harm the target, but which enhance the next source of acid, fire or electricity damage taken before the start of the next turn. You can, undoubtedly, see the first combo forming already by now. Amplified amplification builds on that and is the 3rd level upgraded version. Minor complaint: There seems to be an error here, as the invention states that it improves the previous invention’s damage output by +2d4. The base damage increase bestowed was +2d4, though, which would result in +4d4, not +5d4, as stated. The second upgrade for the abase invention (doesn’t require the amplified amplification invention) here is flexible amplification and adds force and sonic. And yes, omission of cold is intentional. Thirdly, there would be another upgrade for the base invention that allows for a swift action activation.

Bandwagon simulator is super useful 2nd level invention, and lets an automaton use a move action to make friendly, idle automatons attack the same target. Buddy system scripting is another helpful one: If commanded to defend/support an idle automaton, doing so will cause the idle automaton to reciprocate. Why I oughta…subroutine is useful AND potentially hilarious, as the automaton taking damage is given an attack directive versus the source. “What is it doing?” “Evaporating those iron thistles…” Vending machine is another gem, as it bestows the arms invention to all automatons within 30 ft. (See, and that is why I explained the rulings above…)

There also is a massive invention tree that is founded on Heat vent, which allows the automatons to act as soft terrain control dealing minor fire damage to creatures adjacent to them, contingent on the movement of the automaton. Heat vent turbines adds minor electricity damage here; lingering heat vent lights targets on fire, and empower heat vent increases the maximum damage dealt by the base invention.

Slow and steady substructure is a 4th level (Design) invention that makes the automaton only take orders from the master of the alpha, and it may not execute directed actions granted by effects other than being issued directly by said targets. However, in exchange, all limited per day activation inventions slotted on such an automaton can be used +1/day. Also at 4th level, there would be the Hello World subroutine, which may be activated as a directed swift action, and it may only b activated as part of deploying the automaton. The invention grants basically advantage on all d20 rolls made by the automaton – until either one fails or until 1 minute passes. (The ability does state explicitly that it’s not smart to use this with long-term automatons, which is helpful for less experienced players.) The highest level and most costly invention within would be the invention logic tree, which clocks in at 3 BP and as a 5th level invention. This one lets you choose a directed action activated invention, which then no longer requires…you get it. It’s basically the built-in version of the innovation.

Now, in the beginning, I noted an invention that ties in with the combo-tastic Happy Little Automatons-pdf. That would be paint prism, a 2 BP level 1 invention that may be activated as a directed swift action. At the beginning of the automatons next turn, it selects an applied paint invention and starts shedding light of that color. All friendly automatons and the tinker, provided, he has the chromatic study innovation, within 3o ft. gain the benefits of the paint invention until the start of their next turn. This effect persists even if the automaton loses the paint invention (as you can combo with paints…and indeed, it does reward paint cycling! You see, the effect persists and changes the color if the automaton has paint changed next round. The effect only ends when the automaton would repeat a color! Really cool!

Editing and formatting are very good on a formal and rules-language, as expected. Layout adheres to the 2-column b/w-standard of the small Interjection Games-pdfs, and the pdf uses stock art and has no bookmarks, but needs none at this length.

Of all the tinker expansions Bradley Crouch has written, this may well be one of the most crucial and rewarding ones. The inventions and innovations within allow for cool combos galore and add very much super helpful options here…to the point where I’d honestly contemplate potentially granting a few of these as hard-baked abilities in games where the power-level tends to gravitate to the higher end of the spectrum. Apart from the one die-pool size inconsistency, there are no complaints for me to field against this humble and exceedingly cool expansion. Considering the sheer utility and low price point, my final verdict will still clock in at 5 stars + seal of approval. Must-own purchase for fans of the tinker!

You can get this neat Tinker-expansion here on OBS for just $1.50!

You can get the massive tinker-bundle here on OBS!