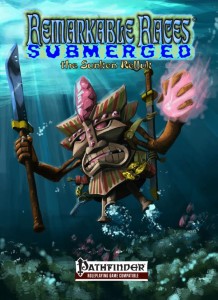 The Relluk-race as presented in Alluria Publishing’s Remarkable Races-series has always been a favorite of mine in concept and imagery rather than in mechanical execution – strange, headless, crystal-topped living constructs that actually are balanced? Nice! The Sunken Relluk is more than a modification of serial numbers, though – beyond a modified imagery that makes the massive Tiki-style masks with bifurcated arms, the sunken relluks do sport some unique modifications. Racial stat-wise, they get +2 Con and Cha, -2 Dex, racial buoyancy +25 and immunity to pressure (if using the Cerualean Seas-rules), are medium and have a swim speed of 40 ft. Sunken relluks do have a constitution score and have less immunities – they “only” receive immunity to poison, sleep effects, paralysis, petrification, disease, nausea, the sickened condition and energy drain. They do not need to sleep, but still have to rest to prepare spells. To offset these massive bonuses, relluks may be healed by spells and effects targeting the living or constructs, but only at half efficiency. And yes, this extends to ability damage. Sunken Relluk gain +2 natural AC and may, as a standard action, belch forth boiling water to an adjacent square, dealing 1 point of steam damage. (see Cerulean Seas -or just substitute fire damage if not using that book) – their crystals emit light as a torch, but strangely do not penalize Stealth.

It should also be noted that sunken relluk lack their landborne brethren’s ability to regulate their heat – out of water they quickly overheat and die, and information that imho belongs into the racial abilities, not exclusively amid the flavor-text of the physical description. Sunken Relluks also may add a vast array of so-called power-gems to their form -they can thus add armor spikes to their form, with magical gems providing a diverse array of benefits -and generally, I like the idea here, though the rules for them do not provide any slot-overlap with magical items, so that’s something to take into account – but it is represented in the massive costs of power gems, so yeah. The pdf dos sport age, height and weight information alongside a selection of 8 racial feats.

The racial feats essentially constitute adaptations of relluk racial feats and like some of them, they are ridiculously weak – take Boiling Gore: 1/day, after dealing damage with a gore attack granted by another feat, you add 1d8 steam damage to the same opponent as a swift action. Swift action. Once per day. 1d8. Seriously? Where I can I sign up to one of the worst wastes of a feat-slot I’ve ever seen? I would have very much appreciated an upgrade here… 1/day 120 ft. jetting away at a speed of 120 ft. is better, but the non-scaling limitation does not make this a good choice either. The other feats remain in this category, btw.

The pdf does provide a racial PrC, the Kahikua, who gains d8, 8+Int skills, 3/4 BAB-progression, 1/2 ref- and will-save progression. This class can be considered a variant of the ARcheovitus PrC of the landborne relluk, with e.g. stonecunning and ruins walker being replaced with better options versus traps – apart from that, no modification.

The pdf closes with two statblocks for frozen and sunken relluks and advice on integrating them into your game. There are no favored class options or traits included.

Editing and formatting are very good, thoughnot perfect – I noticed some minor hiccups. Layout adheres to Alluria Publishing’s beautiful 2-column full-color standard with a bunch of glorious, original top-tier full-color artworks and the pdf comes fully bookmarked for your convenience.

Emily E. Kubisz’s sunken relluks are conceptually awesome and they actually play differently from their land brethren – with armor gems being absent from them and power gems as a system allowing for unique customization options, this modification and system can be considered useful for regular relluks as well. The production values are superb, so that’s also great. At the same time, I sincerely hoped the feats had been properly upgraded. The absence of favored class options and traits is also a bit disappointing and the PrC’s new content boils down to two none-too-inspired abilities.

Whether you consider this worthwhile very much depends on whether you already own the regular relluk or not – if so, then you have to be aware that you’re getting Cerulean Seas-support, nice prose and the power gems – almost everything else in addition is a straight adaptation of the base relluk’s content, without further streamlining of polish. The PrC, like its original version, remains a pretty weak choice and the feats are horribly bad choices. Still, I like this race. Especially if you do not have the original book and are intrigued by the race, you’ll want to get this – and if you’re playing a relluk, the power-gems may be just up your alley. At the same time, this may be solid, but it is not mind-boggling or great; this does have some rough edges that could have been polished off. In the end, my final verdict for these relluks will clock in at 3.5 stars, rounded up due to in dubio pro reo to 4 for the purpose of this platform.

You can get this racial pdf here on OBS and here on d20pfsrd.com’s shop!