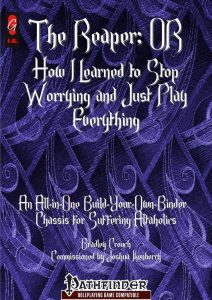 This base class clocks in at a massive 33 pages, 1 page front cover, 1 page editorial/ToC, 1 page SRD, leaving us with 30 pages of content, so let’s take a look!

It should be noted that this class was commissioned via the Interjection Games’ patreon by Joshua Ikenberry – which is an amazing thing, if you ask me.

Anyway, this class is a bit different than a normal Interjection Games class – you see, usually, Interjection Games classes tend to be meticulously designed to work in both the grittiest and most high-fantasy of campaigns – this one comes with a disclaimer that the weaker classes tend to fall behind its potency…but let’s look how this works in detail!

Chassis-wise, the reaper gets d6 HD, 1/2 BAB-progression and good Will-saves as well as 2 + Int skills per level. They also get light armor and shield proficiency, excluding tower shields. The reaper can suffer from arcane spell failure when wearing metal armor. At 1st level, the reaper gains an essence pool equal to 3 times the reaper’s class level. At 9th level, one mental attribute is chosen and adds the chosen ability score modifier to the number, with 13th level adding two. The pool replenishes after 8 hours of rest. At 1st level, the character learns the signature ability called reaping.

The idea here is that all soulsown are created around a core, a so-called seed. These cores are known as seeds and the reaper begins play with two of them. The reaper gains an additional one at 6th level and every 6 levels thereafter. There are different seed subtypes, which sport a pool system and a wide reach, granting abilities. The seeds available are arcane, divine, martial and primal – primal and martial have two different pool systems. Arcane, divine and primal soulsown begin play knowing a single spell from the associated spell-list, learning an additional spell on a level up. The maximum spell level available increases at 4th level and every 3 levels thereafter, capping at 6th spell level, though the spell-save DC is instead 10 + 1/2 class level +spellcasting ability modifier of the soulsown. Casting is done by expending essence points equal to the spell’s level. Spells learned have to adhere to a pyramid rule.

Binding a soulsown is referred to as threshing and requires 1 hour after an 8 hour-rest. At 3rd level, the process called germination allows a reaper to form a temporary secondary bond with a soulsown as a swift action that grants the benefits for 1 minute and while it lasts, it grants the seed’s core ability and talents that work while germinating. Only one germination may be in effect at a given time. and it may be used 1/day, plus an additional time per day at 7th level and every 4 levels thereafter. Starting at 5th level, germination also yields 1d4 temporary essence points, which increases to 2d4 and 3d4 at 11th and 17th level, respectively. Threshing and germination are collectively known as “binding”. 5th level provides speak with dead to all reapers of the arcane, divine and primal seeds, but it does not count towards the pyramid rule.

Seeds start with a granted talent and gain an additional talent at 2nd level, +another talent at 4th level and every even level thereafter. Martial seeds yield a bonus feat OR summon weapon at 1st level, plus an additional benefit at 3rd level and every 4 levels thereafter. The more often summon weapon is taken, the more powerful is the called weaponry, which may be btw. summoned at a 2 essence cost, lasting for 1 minute. Martial soulsown also yields proficiency with martial weapons, +4 Con for the purpose of calculating hit points. Though this is modified, depending on the soulsown bound – you see, the class can actually have a 1/2, 3/4 or full BAB-progression, depending on the types of soulsown bound.

Soulsown talents govern their save DC as mentioned before; if the reaper has no spellcasting seed, the governing save-DC attribute defaults to Charisma. Basically, the soulsown learns the talents, which the reaper then proceeds to basically channel while bound to the soulsown. This also extends to the wide variety of soulsown pets the reaper can gain access to -they manifest as a conglomerate with the soulsown bound and thus, they only manifest when the respective soulsown is bound – the pet has an effective level of reaper level -3, minimum 1 for the purpose of determining power. Favored class option-wise, we cover the core races, aasimar, drow, hobgoblin, kitsune, kobold, orc, puddling, tiefling, vanara and vishkanya and they are pretty cool

The respective soulsown talents are grouped by seed and level where they may be chosen no prerequisite and after that, every 2 levels unlock new ones and some require other prerequisites. All of these are only unlocked when the reaper has the respective soulsown bound. The talents are extremely diverse and half of the pdf is devoted to listing these. In short, these can be envisioned as a massive array of “choose your own class features” array – and the extent of material available is MASSIVE. I mean it. Cantrips? Check. Bonded objects? Check. Domains. Beyond these gloriana (composition magic), lay on hands or touch of corruption, bloodline powers, rod of wonder effects, potion creation, counterspelling, scent, bag of tricks, phantom alchemy (cannot be sold), a lacing option with its own pool to add effects to the reaper’s spellcasting, skills, bonuses – from the active to the passive, there is a true cornucopia of options available here – the more powerful of which, obviously, use the previously mentioned pools granted by the soulsown as resources…and yes, proper combat maneuver use and capstones can be found here – from vastly increased essence pools to a variety of different options, there is A LOT here.

I should also mention totems, which can be pictured as deployable things that can be used to channel effects, allowing for the setting up of AoE-buff stations, an artillery totem, sentries, etc. – and there are means to specialize in this really cool subset of talents with a unique pool. Really cool!

Editing and formatting are very good, I noticed no significant glitches and the rules-language is as impressively precise as we’ve come to expect from Bradley Crouch. Layout adheres to Interjection games’ 2-column b/w-standard with thematically-fitting stock art. The pdf comes with basic bookmarks to the big sections, but not to the respective sub-abilities.

Sooo…the reaper is an impressively strong class, designed to make altaholic players (you know, players who constantly want to play new characters) stick with one character for once…and guess what? It actually works! More importantly, it clocks imho in at tier 3 (as intended by the design) and actually is better balanced than a TON of options I get to see on a regular basis. Considering the wide open nature and huge foot-print of the class, this is doubly impressive. The class is pretty complex and something for advanced players, obviously – and due to its complexity, the respective pools and the like may take a bit of close reading to properly understand, but the sidebars help there…but the class actually has a use beyond the obvious: Know how an issue with 1-on-1-modules tend to be that you need the right class/character to make the module fun? Well, the reaper is pretty much PERFECT for whole 1-on-1-campaigns. Seriously, the flexibility of choices allow for the creation of extremely diverse challenges, making the class a godsend for such games. Personally, I’ll gladly allow this class in my games – while potent, it should not break the game and its massive flexibility is paid for with a relative fragility.

It should also be noted that the class, beyond being a master-scavenger with a ton of modes, also features quite a lot of utterly unique options that manage to codify what would otherwise be options that are too strong in a concise and compelling manner. In short: The reaper is an AMAZING class; it’s fun, versatile and something for every player who easily gets bored with a given class. This is well worth 5 stars + seal of approval.

You can get this complex, rewarding class here on OBS!

You can directly support Bradley Crouch (and even make him design custom pdfs for you!) here on patreon!