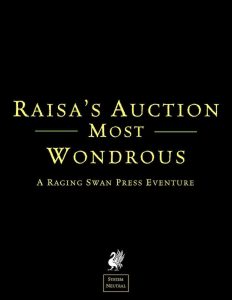 The supplement begins with a brief run-down of the notable NPCs working at Raisa’s—fluff only, as usual for Raging Swan Press. In a minor inconsistency, we do reference NPCs as thieves, but also as wizards; this does not influence the verdict, I just mention it for the purists among my readers who prefer magic-users as the term for these system neutral versions. 3 hooks and 12 whispers and rumors are provided as means to lead into the eventure, and as usual for Raging Swan Press supplements, we also get this nifty list of minor events (12 rather detailed ones this time, taking up ½ of a page) that help an environment feel alive.

This is a clever way of handling an auction; sure, it requires a bit more GM mojo and prep-work than the previous eventures, but it certainly has its priorities straight and execution down. So, all great? Now, *personally*, I’d have preferred no actual rules be given for the system neutral version, instead focusing more on flavor or delivering more narrative abilities, but that may be me. The price for which the items are sold also strike me as low for an old-school game.

Creighton Broadhurst’s take on roleplaying-centric auctions is precise, executed in a clever manner that prioritizes the right things, and as a whole, represents a supplement I really, really like. I don’t love it, though; as noted above, having a more narrative approach over the none-too-interesting suggested base items would have been appreciated for this version.

You can directly support Raging Swan Press here via patreon!

If you liked this review, please consider leaving a tip via paypal, or joining my patreon here.