Quests of Doom: A Midnight Council of Quail (patreon request)

Quests of Doom: A Midnight Council of Quail 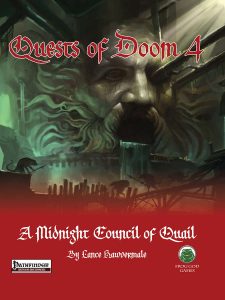 This module is intended for 4–6 characters of levels 3rd to 5th; in contrast to many modules in the series, it is actually not as brutal as you’d expect it to be. The adventure didn’t prove to be too challenging for a decently optimized band of adventurers. While a well-rounded group is suggested, the module is, difficulty-wise, very unlikely to result in PC deaths; if you’re running this for 3rd level characters, the PCs need good tactics in the final combat, but otherwise, the adventure is rather manageable.

Structurally, the module features slightly more of a page of magical and alchemical items, which range from functional (a ring to fortify you against poison) to rather creative ones like enchanted spurs; these spurs, by the way, also include a minor snafu in the item rules, missing a bonus type when there should be one. Another rules issue would be an instance where a Dexterity check is prescribed, when an Acrobatics check would be used for the sort of check instead. That being said, these two minor hiccups won’t break the experience.

The module can be thought of as a cursory investigation and a brief dungeon. As often for these modules, we get read-aloud text for the encounter areas in the dungeon, but not for the investigation section, which takes place in a small village. The module features a b/w-map for the village, and one for the dungeon, but both of these do not come with a player-friendly version sans glyphs/numbers. Serious comfort detriment there. The village map has no grid, and the dungeon map does not note its scale; I assume each square to be 5×5 feet.

Okay, there is one more rules-relevant aspect that needs to be addressed, but in order to do so, I need to go into SPOILERS. As such, I’d like to ask potential players to jump ahead to the conclusion.

All right, only GMs around? Great! So, the module has a REALLY strong opening that hearkens back to old-school aesthetics, when high-level druids were rare (and only a fixed number per level existed, worldwide – to level up you’d need to eliminate a superior…): The party is approached by a flock of Quail, one of whom can speak: The bird has gained sapience (as well as speech – only this one bird speaks) due to proximity to an arch-druid. The birds have observed a weird tendency in a local village, with a new despot moving in and all people behaving more or less apathetic. They ask the party to investigate, and the first section of the module begins.

Here, the adventurers investigate the strange occurrences. The village is peculiar in a few ways, as it sports a wunderkind of sewing, which means that all peasants are very well-dressed, and with things like gong farmers taken into account, we have this subdued sense of weird that I very much enjoyed in the author’s 3.X offerings back in the day.

Structurally, the investigation is not particularly well-structured; a trail of clues or the like isn’t clearly laid out, requiring a bit more prepwork than necessary. However, on the plus side, the whole thing is created in a way that makes the PC’s actions matter more – it is relatively free-form and may well boil down to the party simply forming their own conclusions. The respective keyed encounters note “Infected” for a household that’s compromised, but ultimately, that is not relevant: You see, the obvious despot who moved in is part of the issue, one of the two villains responsible. This fellow is a wereboar who uses one of the new items, a ring of human control, to assert his dominance. This ring generates charm person 3/day, and has a CL of 1st.

…yeah, that’s unfortunately not how it works. RAW, this would mean that he can maintain 3 charm persons, for an hour each; on a failed save, mind you. That doesn’t suffice to keep all people in the village noted as “infected” under control. So yeah, RAW, the premise doesn’t work out as provided. Not even close. It should also be noted that, in PFRPG, there are plenty of ways to detect the presence of enchantment magic, so that is imho the likeliest outcome of the investigation. As a whole, this investigation feels like it has been cut down and/or simplified a bit, and that it doesn’t really account for all the cool things PFRPG can do.

Granted, you can fix that by explaining the flawed ring-rules away with a side-effect of the work of the second villain: You see, there is a hidden complex, where a mad druid lurks, who is under the effects of essentially a kinda-radioactive ore. I like this ore; it has a 6-stage progression (indubitably due to 5e’s influence), but the GM can potentially explain the weird villagers that way.

Anyhow, ideally, the party deals with the wereboar and the hidden druid, the latter being btw. the one difficult combat in the module: A young grizzly plus a CR 7 druid can be hard for a level 3 party but provided the party can keep the druid from using his spellcasting to full effect, it is very much possible to triumph in this module without having too hard a time. The small dungeon is solid; not much to complain there, but also not that much stood out to me.

Which brings me to one issue of the module that GMs need to be aware of: This module breaks the WBL-assumptions of the game, big time—not in a game-breaking manner, and indeed, I consider e.g. a flag that you can use to make use of the clouds as signals to be thematically amazing…but if that sort of thing is important to you, it still bears mentioning.

…and there is, sort of, the elephant in the room: The setup of this adventure is top-tier, and the village is rather neat as well; the Quail-hook is really cool. But I couldn’t help but feel that this great hook is totally wasted on the banality of the antagonists of the module. I mean, picture it: If the party actually had to use the Quail as a surveillance-force, combined with a schedule for villagers, you know, some actual real investigation, that would be *SO COOL*; but the module doesn’t really make use of its premise, instead opting for something safe. It’s so cool, but it’s only window-dressing. Alternatively, having a Quail surveillance hive-mind as an opponent would have been rather awesome, right? What has been done with the setup is okay, but not half as cool as mind-blowing as the premise deserved.

Conclusion:
Editing and formatting are good on a formal level, okay on a rules-language level; the module is mostly functional as presented, with only details as slightly problematic factors. Layout adheres to a 2-column b/w-standard, with solid b/w-artworks. The cartography in b/w is nice as well, but the lack of player-friendly maps is a big comfort detriment. The pdf comes fully bookmarked for your convenience.

Lance Hawvermale’s midnight council sports the trademark subdued weirdness I always liked in his writing; there are aspects of fairy tale-esqueness here, with a subdued and interesting punk-sprinkling on top. There’s just this tiny bit of it that makes it feel distinct and novel, while still hitting the classic Lost lands vibes. Dave Landry’s PF-conversion also works better in this module than in many other modules of the series. That being said, I couldn’t help but feel like this had been cut down to a much smaller size than originally intended…or like it squanders its absolutely fantastic premise. The investigation aspect of the module, structurally, is so barebones and obvious, and without that much to actually actively thwart the party, that I couldn’t help but feel let down after it kicked off so strongly.

In a way, this is almost a mirror-image of Quests of Doom: Awakenings: Awakenings was dragged from the lofty praise it deserved by formal issues, whereas this one is stronger in the formal components, but promises much with its hook, only to then underdeliver a rather mundane story. Now, as a person, I vastly prefer Awakenings over this module, but as a reviewer, I have to account for this adventure actually working as penned. In the end, my final verdict can’t exceed 3.5 stars, rounded down…but this one gives me hope for the remaining modules in the series.

My review is based on the PFRPG-iteration, but there are two more:

If you enjoy my reviews, please consider leaving a donation via paypal, or joining my patreon here.