Quests of Doom: In the Time of Shardfall (Patreon Request)

Quests of Doom: In the Time of Shardfall 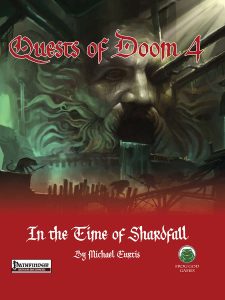 This module clocks in at 29 pages, 1 page front cover, 1 page editorial, 1 page ToC, 1 page advertisement, 2 pages of SRD, 1 page back cover, leaving us with 22 pages of content, so let’s take a look!

This review was requested as part of a series of reviews by my patreon supporters. My review is based on the PF-version, since that’s the one that was requested. I don’t own the other versions.

This module is designated for 4–6 characters of 5th or 6th level, and as always for Frog God Games, a well-balanced group is very much recommended. Nominally set in the Lost Lands campaign setting, the module can be adapted rather easily to other campaign settings…with a few caveats that may be relevant for you. On a formal level, it should be noted that the module has 7 neat b/w maps, but much to my chagrin, no player-friendly, label-less versions are provided; jarring, considering that FGG used to include those. We get random encounters, rumors, and essentially a hex map with a couple of smaller regions where everything zooms in – nice, I like a good wilderness/location scenario. (As such, it should be noted that this isn’t linear per se, though the module does seem to work best in a certain sequence.) The module features well-written read-aloud text.

The module is penned by none other than Michael Curtis, who is generally a guarantee for an awesome module, so let’s see if this module can break the curse that seems to have affected this series.

The following discussion of the module contains SPOILERS. Potential players should jump ahead to the conclusion.

All right, only GMs around? Great! So, the backstory of this module taps into an inconceivably ancient prehistory where the Great Old Ones waged war. In this age of dinosaurs and worse, the dracosaurus horribilis was created – the proto-dragon Ghurazkz. This thing was so powerful that the demon frog god Tsathogga’s tsathar servitor race had to intervene, creating a mirror of raw obsidian, the Akaata – this would drain the life-force of the shoggoth-slaying monstrosity, but even it would not suffice. And thus, they cast the mirror with its prisoners into the vortex of time, into the far future. Eons passed, empires fell, tsathar degenerated…and that future has come. It’s the time of the Shardfall, as the Akaata shatters, releasing its prisoners.

Readers familiar with DCC will note the references to essentially a time of chaos back then, to dark forces battling, etc. – I like the tone here. However, if your game does have a pretty established lore regarding ancient eras, that’s something to bear in mind. Some of the module’s impact is also predicated on the fact that suddenly, prehistoric creatures are roaming the landscape is deemed to be odd, so if you have a dinosaur county in your setting, perhaps don’t play the module near that one.

The module begins pretty much with a bang, and has the party face dinosaurs and pretty soon find the first of the 5 fragments of the ancient mirror; I do like that destroying these is very much possible and rewards being smart (don’t attack the reflective side); after some serious (and cool/deadly) dinosaur action, the trail of the fragments will sooner or later confront the PCs with Jouktar, the most memorable NPC herein, and also a symptom for the book: This fellow would be a tsathar from the pre-degeneration phase, when they had an intelligent, refined culture; he was imprisoned as well, and could fill in the party on what happened…but the language barrier is severe due to millennia of differences, and as such, pantomiming is suggested, with some serious ideas re pantomiming etc.. I love that per se.

Yeah, unlike in DCC, languages aren’t a problem in PF. Comprehend languages, anyone? Tongues? Seriously, why does this module ignore basic strategies for solving this? Heck, the issue extends beyond system borders! In S&W (the go-to-OSR-system for these), the whole problem can be circumvented by writing down communication and casting read languages, a frickin’ 1st-level magic-user spell. 5e also has this little-known 1st-level ritual…it’s called frickin’ comprehend languages. I really don’t get it. This sort of issue could have been bypassed with just a proper narrative framing, but instead, we get some serious consistency issues in ALL THREE SYSTEMS this was released for. This is particularly jarring, as the tsathar actually makes for a reliable and unconventional ally during the module, and is one of the few non-combat scenes in the otherwise combat-heavy scenario full of neat setpieces, which also includes a tar-pit-laden bog of poisonous mists, with a nasty necromancer on the loose. AWESOME.

…why does none of the undead here get special tar abilities? A proper mini-template, done? Where are the cool environmental effects? Absent. It’s such a great backdrop, where is the mechanical significance? We also have a few minor formatting glitches and e.g. misnamed skills like “Riding” instead of Ride, but these are cosmetic.

Ultimately, the PCs will need to make their way to a tribe of ogrillons to the proto-dragon and deal with it before it regains its strength….and it’s a MEDIUM creature. It’s CR 7, and essentially a juvenile gray dragon. It’s a solid, challenging boss…but it’s so incredibly lame after the cool set-up.

It was so horribly anticlimactic, and without the dinosaur angle and background story, it’d feel like just another dragon lording over humanoids. This, more than anything, screwed with me; why doesn’t the fellow get a unique statblock? Even better option: Why is there no gathering of power/special abilities? It’d have been easy to assign one unique ability per fragment dealt with; all the abilities only work against the proto-dragon, and as such, they could have been used to have the PCs deal with a boss far above their weight-class!

You know, something like: “Power of the Ages (Su): As a swift action, you can tap into the life-force of those who perished at the claws of the proto-dragon, fortifying yourself against its attacks. You gain xyz temporary hit points, as the spirits of these damned shield you from harm. You can command these spirits to attack as a standard action…” (No, this is not in the book; I improvised this.)

Something WORTHY of the epic set-up!

As written, a well-optimized party can eliminate this fellow in two rounds, tops, and a real power-gamer can one-shot the “epic” proto-dragon. Also: It’s MEDIUM.

All this set-up for a MEDIUM dragon…*sigh* It’s also weaker (as in: less Strength) than many of the dinos unleashed. I can’t recall when I’ve been this underwhelmed by a module’s boss.

Editing and formatting are okay on a formal level; on a rules-language level, the lack of familiarity with the target systems, particularly the PF-version, of an otherwise great author is very much evident…as is the fact that the Pathfinder conversion by Dave Landry is just BAD and barebones, failing to account for realities of the system in instances where these aren’t just statblock errors, but actually the conversion hampers the frickin’ plot. Layout adheres to a clean two-column b/w-standard with some solid b/w-artworks that might be familiar to fans of FGG. The b/w-cartography is per se really cool and detailed…but we have one map with a 10 ft.-grid, and one with a 20 ft.-grid (an epic T-rex battle); both grid-sizes are a PAIN to work with in PFRPG. The lack of player-friendly versions is also a further strike against the module, particularly in light of the cool set-up. The pdf comes fully bookmarked for your convenience.

Michael Curtis’ “In the Time of the Shardfall” is an excellent example of an amazing yarn sunk by sloppy mechanical execution, at least in PFRPG. I can’t comment on the 5e and OSR-versions, but as outlined above, unless the module was rewritten (which I doubt) for these versions, the language-issue at least will persist. This module was frickin’ heartbreaking to review…because its framework does so much right: It is relatively free-form, has really cool dino-battles, awesome backdrops that ooze atmosphere and a cool concept for a final boss….and then proceeds to squander all of that potential. Where are the sticky tar-modifications for the undead? Where are the unique hazards? Why is the final boss so incredibly lame?

I think, I might have an idea. I’m just suspecting things here, but I assume that this was written in a system-neutral manner, with different specialists assigned to jam the module into the respective systems. And at least for PFRPG, that operation has fallen flat. Big time. This needed more pronounced rewrites to work in the system, and instead, we get what feels like a rushed minimal-effort conversion.

…can you have fun with this? Theoretically, yes. If your party isn’t that deep into PFRPG’s mechanics, and you gloss over the problems. But in many ways, this module is symptomatic of issues that sunk some other great modules in this series. I really hope the remaining modules in the series will leave me with more positive things to say.

I need to rate this, though. And as painful as this might be for me, I can’t justify rating this higher than 2.5 stars, rounded up, but only barely. This has all the makings of 5 stars + seal of approval, but fails to capitalize on them in the most aggravating way.

I do not have the following versions, but they exist:

The 5e version can be found here.

The S&W (OSR) version can be found here.

If you enjoy my reviews, please consider leaving a donation via paypal, or joining my patreon. Thank you