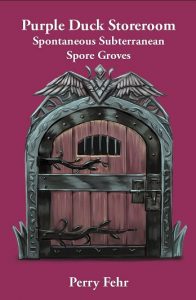 This installment of the Purple Duck Storeroom-series clocks in at 11 pages, 1 page front cover, 2 pages of SRD, leaving us with 8 pages of content, so let’s take a look!

So, what is this? If AAW Games’ critically acclaimed Rise of the Drow has taught me anything, then it’s that modern gaming had lost some of its sensibilities; when the saga took the wonder of the 2nd edition’s Dungeoneer’s Survival Guide and the general notion of believable environments and infused it right back into the subterranean realms, I was ecstatic. The underworld hadn’t felt that alive, that wondrous, in a long, long time.

So, this little pdf can be considered to be something of a mini-dressing file: The idea is as follows: The things in the underdark need to eat, right? Well, fungi grow below and so, the pdf does contain subterranean spore groves for your perusal. in power-level, they are rules-interaction-wise mostly at the lower scale and the pdf works as follows: You have 12 entries to determine weird fungi; then, you determine the size of the grove with a d12, which also modifies all subsequent tables, so yes, size does matter here.

Next up, you determine the food value to be scavenged from the grove…and then the effects. Sure, the shrooms might be poisonous…but there is similarly a chance that one of 8 strange effects may kick in upon consumption. These range from mild hallucinations to bonuses to Cha or medicinal properties, and while slightly more precision here pertaining conditions, bonus types and the like, the basic functionality is there. A sample hazard table modified by the number and CR of PCs is included, with hazards and foes ranging from CR – to 7. A little table to determine fungal themed monsters is next (15 entries strong and pretty much what you’d expect) and 12 non-fungal sample monsters (standard underworld fare) can be used to include here.

The pdf concludes with a sample hazard – the CR 3 cyan fungus, which sends discus-like projectiles towards anything nearby when subjected to light. The fungus is awesome, though the rules-language for the attack and damage is a bit jumbled.

Editing and formatting is very good on a formal level; on a rules-level, there are some minor deviations, but none that break the material. Layout adheres to Purple Duck Games’ 1-column, printer-friendly standard in A5-size (6” by 9”). The pdf has a nice one-page artwork of a vegepygmy in full-color. The pdf comes fully bookmarked for your convenience.

Perry Fehr’s little pdf has the heart at the right place: The visuals are nice and while it does not reach the level of evocative wonder of RotD’s fungal jungle, that’s not the goal – this is a great fungus fields generator and it does not purport to be more than that. The new fungus is pretty cool and something I’ll definitely use.

All in all, this little pdf is a fun addition to subterranean gameplay and particularly lower-level underdark adventuring will benefit from the quick and easy food generation tables here; for longer or survivalist treks through the lightless depths, this can be a boon indeed, though I found myself wishing it had devoted more time to the fungi and provided slightly more in that terrain, less to the pretty generic sample creatures encountered tables. In the end, my final verdict will clock in at 4 stars – an inexpensive, fun and very useful little pdf, but one that falls short of what it could have been. Still, whether it’s Second Darkness, Rise of the Drow or the quasi-defunct Throne of the Night – subterranean campaigns will enjoy this one.

You can get this cool little generator file here on OBS!