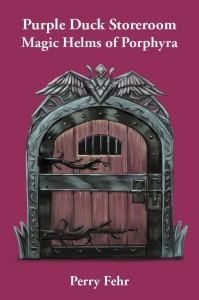 This installment of Purple Duck Games’ inexpensive Purple Duck Storeroom-series clocks in at 11 pages, 1 page front cover, 2 pages SRD, leaving us with 8 pages of content, so let’s take a look!

Okay, so most helmets are assumed to be part of the armor, right? Well, this experimental pdf goes one step further (or backwards through time, depending on your perspective) regarding the measure of protection helmets offer. The pdf does this by introducing an item, the greathelm – this helm, when worn sans armor and only a shield (or no shield), grants a +1 armor bonus on its own, but also penalizes Perception by -2. More importantly, it offers a 10% chance to negate sneak attack damage or the bonus damage incurred from a critical hit.

Basically, it has limit 2 and fortification 10% – two new scores introduced here; the first denotes how the senses are limited by the helm; the second denotes the chance to negate critical hits et al. – and no, I have no problem with finer distinctions regarding fortification than the ones provided by the base rules. Each item also has a chance to incur the broken condition upon negating a critical hit. Such helms require heavy armor proficiency to grant their benefits, just fyi. So that would be the mundane foundation.

The pdf continues to build on this foundation with numerous helms – the first of which allows for blur in increments as well as helping versus death attacks. I would have appreciated information on whether this is a spell trigger item or use activated item regarding activation of the blur-effect, though – the latter would also pose the question of whether it can be activated as a standard or free action.

Thankfully, a scorching ray emitting tiara does get the activation right. A bascinet allows the wearer to treat one hostile creature as dazed for the purposes of flanking, which may also be dazed on an easy failed save and call forth a swarm of ravens (statblock provided) – unfortunately, once again sans specifying which action the summoning takes. I also would have appreciated information on whether saving versus the daze negates the flanking benefit – I *assume* no, but the wording could quite frankly be clearer.

A combination of scroll-enhancer and spell-in-a-can works perfectly and the erkusaan helmet that enhance leadership and helps intimidate humans sports 8 delightfully chaotic effects. There would also be a brain-case that enhances Intelligence, grants low-light vision and allows for limited communication with constructs. The Lion-King’s Greathelm with its stacking AC-bonus is neat and negates charge-penalties – it also provides a 1/day cone of sonic damage…that lacks the activation action. What about a crown that can unreliably absorb spells, transmuting them into a time shudder?

Fans of Porhyra will like a helmet that helps bypass sanctuary, repulsion, etc. – but most importantly, the porphyrite borders while also minimizing the damage caused by wall-spells (sans prismatic wall)!

A helmet that replaces spellcasting for the full-round weapon display of Dazzling Display also makes sense to me and is actually rather intriguing! Similarly, a multi-veiled turban is nice.

Editing and formatting are very good on a formal level; on a rules-language level, they are good, if not perfect. Thankfully, one can usually ascertain what’s meant sans ambiguity, even though syntax etc deviates. Layout adheres to Purple Duck Games’ printer-friendly no-frills 1-column purple/black/white-standard for the series, with no artworks and the pdf actually is fully bookmarked – kudos!

The one reason this pdf does not get a higher rating can be summed up in two words: Activation action. Quite a few of the items herein fail to specify them for the spell-in-a-can-effects that accompany some helmets and while a spell-trigger’s standard action can be assumed, I can’t be sure. That being said, I like the finer fortification and the play with Perception penalties exhibited here – they make sense to me and the helmets themselves are sufficiently varied and sport interesting ideas. While formally falling short of always functional and precise rules-language, Perry Fehr’s helmets do offer some rather cool ideas a GM can further use, enhance and tweak. My final verdict will hence clock in at 3.5 stars, rounded up to 4 due to the low and fair price point.

You can get this cool helmet concept for a single buck here on OBS!
Endzeitgeist out.