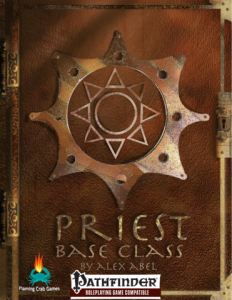 The freshman offering by Flaming Crab Games clocks in at 28 pages, 1 page front cover, 1 page editorial/ToC, 2 pages of SRD, leaving us with 24 pages of content, so let’s take a look!

The priest base class gets d6, 4+Int skills, 1/2 BAB-progression, good Will-saves as well as proficiency with club, dagger, light mace, quarterstaff and stake. The priest does not get armor or shield proficiency. Off here: the priest loses spellcasting while wearing armor or shields – no increased spell failure or the like – just strap a padded armor on those hostile priests and boom: Impotent priests. Not a fan of this design decision.

Like a cleric, the priest receives an Aura (but has the (ex) not properly bolded in a minor formatting glitch) and gets Wis-based prepared spellcasting and channel energy progression like a cleric – which brings me to one point: This is an alternate class and should be designated as such to prevent multiclassing with the cleric…but I digress.

What you’ll ask by now, you’ll note that there needs to be something to offset the lack of martial potency the priest exhibits in comparison to the cleric. This would be the selection of a dogma: These can generally be considered to be the replacements for the respective domains and alignment-specific constraints regarding spells etc. still retain in effect. The dogmas have the same name of the domains, conveniently, and thus provide all necessary means of adapting new content to the class, which is neat indeed. Dogmas also sport dogma powers, which unless otherwise noted, are initiated as a standard action.

2nd level adds half class level to Knowledge (Arcana), (Religion), one Knowledge of the priest’s choice and Linguistics and may make such checks untrained. 2nd level grants two secondary dogmas and 4th level unlocks these second dogma’s powers, while the capstone makes the dogma-selection flexible on a daily basis…which is kind of lame, considering the limited array of dogmas each deity offers. The important change, though, does lie in the spontaneous conversion ability of the priest – you see, the class can spontaneously convert spells prepared into the dogma’s respective granted bonus spells, providing superior spell flexibility over the regular cleric’s selection – one btw. further enhanced by a wide array of subdogmas associated basically with the cleric’s respective subdomain choices and yes, the dogmas sport the respective powers you’d assume.

Now, while quite a few of these dogmas are truly intriguing, at the same time, I do feel like they are not close to being universally well-balanced. You see, the basic premise of the priest is that it feels more wizard-y and thus is more spell-centric than the more martial bent of the cleric and in this regard, the class does succeed at its goal. In the fine-tuning of the class, however, some serious playtesting wouldn’t have hurt the priest. The dogmas do not sport the cleric’s usual spell-list, with Destruction providing fireball at 4th level and lightning bolt at 3rd level – okay, right? Well…it kind of isn’t nice once you start thinking about it. The one defining weakness of the wizard and the only thing that renders the sorceror even halfway valid, is the lack of flexibility and requirement for the preparation in advance. Secondly, the cleric and druid get instant access to all divine spells and so does the priest, meaning that the relative, slightly decreased usefulness of these spells versus the superb sorc/wiz-list is offset by mere availability. Now dogmas do poach excessively among better spell-lists, so that’s one component that offsets the loss of martial prowess, so far, so good. However, things get kind of ugly once you realize that you have 3 dogmas for spontaneous conversion, with some allowing you to maintain the power output of a sorceror or wizard that only specializes in a given field, while also retaining superb flexibility. The problem is evident: While high-powered campaigns may shrug this issue off, more conservatively balanced groups will not appreciate this; it’s, ultimately, a balance-concern here that surpasses the payoff of the decreased martial prowess, though not in a way that necessarily renders it broken – only potentially problematic.

The pdf also comes with a broad selection of archetypes for the priest class, all of which can be considered to be among the small, function-driven type. The Fanatic replaces channel energy with scaling columns of 10-ft divine, untyped power, which is pretty nasty, as it is not subject to any means of prevention. Heretics may choose a dogma (not a subdogma) from another deity, but loses one dogma power from among her dogmas, exacerbating the above-mentioned flexibility issue, but also providing a lot of roleplaying potential in-game. The Hospitaler is the dedicated healer priest, locked into healing channels and the dogma, but also gets mercy-like anti-condition benefits to add to her channels, which is pretty powerful, but okay. The Kahuna replaces two dogmas with nature bond and the class also gets a witch hex at first level, +1 at 2nd and every even level thereafter – which is much too strong, considering the power of hexes. Worse, at 10th level, the archetype allows for the selection of a grand hex WHENEVER SHE GAINS A NEW HEX. Grand Hex. You know, the stuff witches get at 18th level…äh…lol? I do believe this ought to be major hexes, NOT grand hexes…

The very unfortunately-named Necromancer-archetype loses one secondary dogma, but obviously gets some undead-control tricks and automatically empowers all spells, spell-like abilities, etc. used to heal undead…which is nasty indeed and should probably have a daily cap. Philosophers may freely replace all dogma spells of a dogma with any spells from the sorc/wiz or cleric list and treat them as dogma spells instead, but at +1 level. This allows you to cherry pick spells. Extremely powerful…and problematic. The Sage uses Int instead of Wis and gets the benefits for skills. Additionally, instead of secondary dogma, the archetype gets one spell of the sorc/wiz-list at 2nd level and every even level thereafter, again, cherry-picking spells, but at least at the cost of most of dogma’s flexibility.

The undivided priest cannot select a subdogma for her primary dogma, but gains an increased caster level or two of her primary dogma’s subdogma’s powers as well as adding subdogma spells to the spells known – basically, we have a variation of the flexibility the base class provides here, with a focus on subdogma spells, with the issues from the base class basically still existing in variations. Wanderers replace the primary dogmas with animal companions and they also may add spells from the druid spell list (1 at 2nd level, +1 every even level) to their arsenal in lieu of druid levels while also receiving gaining associated skill benefits. 6th level is a bit problematic, with a level 1 druid spell with a duration longer than instantaneous with a range of creature touched/personal becoming a supernatural ability on a permanent basis – while this can be problematic, the replacement for channel energy makes this still valid – in fact, this archetype is better balanced than the base class. Zealots get +1 primary dogma, but may not cast any spells not on the dogma lists – again, taking care of the balance-ramifications, though in this case, the nerf may be a bit too pronounced. The pdf closes with 4 feats: 2 uses of Channel energy for an empowered version; one feat to increase die-size of channel by one step, one feat that renders the sage’s divine arcana a full-blown wildcard spell (BROKEN) and one that lets you expend 3 channels for a maximized channel – which is better than 4WFG’s version of the feat with its flat 3/day limit sans taxing the resource itself.

Editing and formatting are good, though not perfect. Layout adheres to an elegant 2-column full-color standard and the pdf has a GORGEOUS artwork for the class – kudos to the artist! The pdf comes fully bookmarked and also sports hyperlinks to d20pfsrd.com’s shop – the good ones, mind you. Finally, the book comes with a lite-version that is more tablet-friendly and also one with hidden hyperlinks – kudos there again!

Alex Abel and his Flaming Cab Games’ freshman offering, the Priest, is certainly an interesting class that very much feels like an alternate class and should be declared as such; The priest does not stun you with mechanical innovation or the like, but the way in which it codifies a vast amount of dogmas and the like is an impressive feat in itself.

At the same time, this pdf does show less refinement than later Flaming Crab Games pdfs in both rules-language and the precise components of the respective rules – the value of spontaneous conversion, for example, is grossly underestimated by the class’s balancing and generally, I would have really enjoyed more unique tricks – as presented, this pretty much can be considered a more wizard-like alternate class of the cleric that may work fine at some tables and break the game for more gritty/optimization-centric tables.

By no means bad, this still remains a flawed, though not terribly so, class that can easily work with some agreement between players and GMs at a given table. On the formal side, I wish this ironed out the glitches that haunt it and took the balance between dogmas and values of its benefits a bit more serious…and had a better armor-rule, which is pretty nasty. In the end, this is an okay freshman offering for the company that can still work for some tables- hence, I will rate this 2.5 stars, rounded up to 3 due to this being a freshman offering.

You can get this base class here on OBS and here on d20pfsrd.com’s shop!