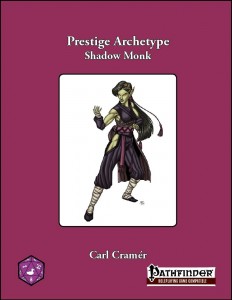 So, what is the shadow monk? Well remember the shadow dancer PrC? Two classes were predestined for it – rogue and monk; Well, since the Prestige Archetype Shadow Dancer is the roguish one, this one is the shadow dancer/monk-combo-built. As such, the class receives proficiency with monk weapons, have a wis-based scaling AC-bonus, 3/4 BAB-progression, all good saves and scale unarmed attack damage up to 2d10, with the tables for small/large monk damage outputs thankfully provided as well. From level 1, flurry of blows is part of the picture, 2nd level evasion – no complaints there. However, the third level once again provides hide in plain sight in its strongest variant a couple of levels too early for my tastes. Unlike the roguish shadowdancer, the shadow monk powers his spell-like abilities with ki and gains them earlier at 6th, 8th, 15th and 18th level, receiving 2 options per level. Alas, the spell-like ability/spells-confusion of the shadow dancer also haunts the shadow monk.

Shadow jump and high-level tricks like timeless body, empty body etc. remain and the capstone, once again, is an apotheosis, while the signature quivering palm is gained at 15th level.

The pdf comes with FCOs for the core races and sample NPC-builds for 1st, 5th, 10th and 15th level.

Carl Cramér’s Shadow Monk is haunted by the very same issues as the shadow dancer, with perhaps one notable difference – where the shadow dancer may have seemed like an upgrade for rogues (though not as cool an upgrade as the stellar Prestige Archetype Assassin), the shadow monk fails to deliver that – partially due to the weakness of the monk base-class and its, at least per default, utterly bland ability-progression. More so than any other combination before, these guys could have used some unique tricks to set them aside. The ki-powered shadow abilities actually decrease the appeal of the class – some of the coolest and most efficient feats and options for the monk require the expenditure of ki and further diminishing that resource makes in this case for a poor design decision that further limits the options instead of providing much needed breadth. Add to that the minor glitch and very early hide in plain sight and we have perhaps one of the weakest installment so far in the series. My final verdict will clock in at 2.5 stars, rounded up to 3 due to this being too good to deserve a two-star flurry of rating-slapping.

You can get this prestige archetype here on OBS and here on d20pfsrd.com’s shop.