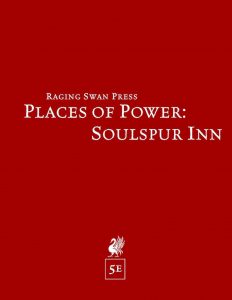 Soulspur Inn has always been there, as far as most folks are concerned – the much-beloved Inn is a sort of neutral ground for adventurers, both regarding legal and moral conflicts. The Inn’s mistress, a woman named Erlgamm, is an epitome of hospitality and oddly, her sharp tongue seems to actually succeed in keeping the tavern a neutral ground of sorts. She is also notorious for her thirst for knowledge, and more than one adventurer has had free drink and food for sharing the latest exploits. Homely and refined, the fully mapped inn is a rather distinguished place and smart players may well find some interesting tidbits regarding the inn and its environments. 6 different whispers and rumours are included for your convenience, and a brief marketplace section allows for the purchase of a variety of low-level alchemical/magical goods as well. These have been properly adapted to 5e, just fyi.

The interesting angle here is that the place is very much what it seems to be regarding most aspects – however, there is a second side, all but removed from the proceedings in the inn, and it is not pleasant. That being said, the valley all but requires the inn, so how to handle everything will be an interesting decision, perhaps one that will carry with it a bitter-sweet aftertaste…and one nasty hook pertaining spiced ale is particularly interesting. That being said, this is almost system neutral in that there is e.g. no DC noted for a locked door, no DC to break bars, etc. – this may or may not bother you, but it is worth noting. In 5e, I also found myself expecting a bit more regarding the effects the primary antagonist can unleash – the inn is pretty much the epitome of a lair, and not getting a unique lair action or the like is a bit of a lost chance.

Josh Vogt’s Soulspur Inn is a fun environment that unleashes its full potential when you establish it as a home turf of sorts for the PCs. That being said, the “too good to be true”-component that oozes from it, the slightly uncanny angle, is not exactly new. I maintain that actually NOT having an evil twist would have been the more interesting option here, as the type of narrative provided here is pretty well-represented in gaming. That being said, there is one aspect here that elevates this from being an okay supplement, and this aspect lies in the execution of how the trope is presented – the pdf does a good job at depicting why the inn works as such, why the truth hasn’t surfaced. There is, however, also a component here that, well-implemented, could have elevated this further – magic. The issue with this type of narrative lies ultimately in the fact that there are plenty of ways to detect foul shenanigans, and a sidebar of counter-measures or the like, customized for the system, would have significantly enhanced the immediate usefulness of the pdf. As written, a GM will have to work a bit to make this play out as intended and the mechanical aspects are a bit sparse for my taste. Hence, like the PFRPG-version, my final verdict will clock in at 3.5 stars, rounded up due to in dubio pro reo – a well-executed supplement that falls short of excellence, but remains an interesting and worthwhile set-piece.