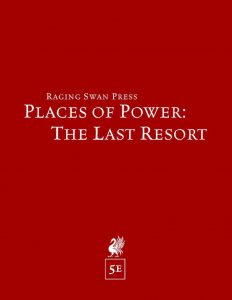 Speaking of diverse: This pdf follows the expanded formula of the newer Raging Swan Press offerings, meaning that we get tailor-made adventure-hooks for a wide variety of the different locations. What about a quest to get a lily straight from the abyss or a murder investigation, which certainly should be interesting in this place? With the chiefs of the inns being high-level beings, magic is pretty dominant, and the place actually does represent that in a few details, which can offer tangible benefits. In a minor complaint, I did notice one reference to a skill check that should be Insight only codified as Wisdom, so that aspect could be slightly tighter, though, as a whole, rules language has been properly converted.

Editing and formatting are very good, I noticed no serious issues on a formal or rules-language level. Layout adheres to Raging Swan Press’ elegant two-column b/w-standard and the pdf sports really nice b/w-artworks and cartography. The pdf comes in two versions, one optimized for the printer and one optimized for screen-use. Kudos! Both pdfs are fully bookmarked for your convenience. NPCs noted refer to the proper default statblocks in a couple of cases; a few others require you to do the statting, though.

Mike Welham’s Last Resort is a pdf that, once I had realized what it was, made me groan a bit. The “microcosm of macrocosm” regarding alignment trope has been done before, and in a way, this collection of inns did feel a bit like Planescape-lite to me, at least in its theme. That being said, the actual execution of the trope is handled once more with the panache, subtle allusions and captivating prose that Mr. Welham always brings to the table. Moreover, the eye towards immediate usefulness at the table does make the Last Resort stand out – unlike similar solutions, it does not require a change of scenery, a big meta-setting or the like. This place could easily and seamlessly be slotted into just about any setting and environment, with the rift as an obvious way for the Gm to eliminate it once more as soon as it has served its task. The captivating prose, eclectic and eccentric characters and the focus on making this as simple to use as possible, are what sets this apart. The fact that it also is slightly meatier than the often purely fluff-centric Places of Power adds to the appeal of this supplement, even though, more so than the PFRPG-version, it somewhat suffers from 5e simply not having as big a cadre of sample statblocks to refer to. In an ideal world, this would come with its own NPC-codex, but this is a system-immanent issue and not the fault of the pdf.

So yeah, all in all, I heartily recommend this if you need an unobtrusive minor planar hub/means to get the PCs somewhere/way of introducing strange critters. The 5e-version is a solid take on the concept, with my final verdict clocking in at 4.5 stars, rounded up due to in dubio pro reo.

You can get this neat place here on OBS!