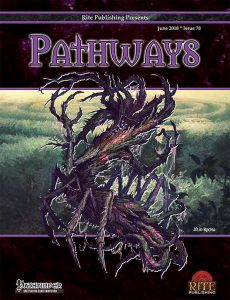 This installment of the FREE Pathways-zine clocks in at 49 pages, 1 page front cover, 1 page ToC, 1 page editorial, 15 pages of advertisements, 1 page SRD, leaving us with 30 pages of content, so let’s take a look!

Now, I usually don’t review Pathways any more, since it’s, you know, FREE, and pretty well-known, but one of my patreon supporters asked me to cover the magazine as a prioritized review, so here goes!

After Dave Paul’s well-written introduction, we kick off this issue with the Labyrinth Lord template, penned by Wren Roy. No, this does not change your creature to the OSR-rules set – instead, it is a CR +2, representing a creature that gets a sensory bond with their lair, increasing its reach with HD. This extends to being able to pinpoint targets and cognizance of destruction or changes to the lair’s general terrain, but not beyond. This is interesting, as it means that e.g. fragile objects being destroyed *can* be noticed, while a more subtle approach isn’t. In short: This practically begs for an infiltration scenario! The labyrinth lord also designates one area of their lair as the heart, and receives fast healing and an immunity to being flanked while inside. Interesting: These creatures can enhance the skills, damage die size and DCs of hazards in the lair. This happens in a passive way sans action-expenditure. They also have an ability that increases the chance of becoming lost, and makes it possible that missing allies are not immediately noticed…oh, and guess what? Teleportation is also not reliable, and we get a couple of SPs… The disturbing thing on the cover, labyrinth lord Yangethe (CR 11) also gets full stats here, and a one-page artwork. The stats are solid.

The next section provides 20 system neutral rumors to hear on the market, penned by Raging Swan Press’ Creighton Broadhurst. The rumors are designed to be broadly-applicable, and offer a good diversity. After this, Dave Paul provides a spell showcase, taking earthen spellpath from 101 Plain Spells, as well as insightful rider from 101 Hill & Mountain Spells. Both pdfs are excellent, and if you’ve so far refrained from checking them out, this’ll be a great way to take a look what you’re missing – Dave Paul’s spells are genuinely some of the coolest released for PFRPG’s first edition.

The next section is penned by Carlos Cabrera, and is pretty interesting: We kick off with planar instabilities, and stumbling into this may result in gaining the astral scourge template (it functionally is similar to a hazard), which ranges in CR-increases from +2 to +6. Those getting this template become subjected to a vulnerability to e.g. dismissal or banishment. An astral scourge thus targeted detonates, and the explosion can potentially send those affected to other planes. The damage inflicted is untyped – personally, it think it probably should be force damage. The radii of the detonation and planar dispersal of those affected scale with size category. Any creature that comes into contact with an astral scourge take 2d6 damage – again, untyped.  Astral scourges are hardcoded to want their state cured – if capable of casting the high-level magic required, they can outsource this magic/SP to another target temporarily – I assume that this does potentially cause damage. Anyhow, the ability is per se pretty well-codified. But why would they outsource the ability? Well, astral scourges lose spells or SPs while they have that template… In essence, this is a complex and rather deadly negative condition that you won’t usually have for long.

The section also features 5 spells: Planar feedback clothes you in frayed planar fabric, requiring an Intelligence check to properly scry the target, and on a failure, the target failing to pierce your defenses is affected as though if you failed contact other plane. Okay, but the mental ability score drop is a bit brutal – particularly since it is based on a bit of an issue from the early days of the game: You see, contact other plane explicitly calls for Intelligence checks, which should be instead referencing to the spellcasting ability score modifier for the sake of fairness; it also calls out the loss off ARCANE spellcasting – which the psychic class, which can cast the spell, does not have. So yeah, this one’s a bit rough due to its referencing of an outdated core spell foundation. It’s also save or suck/instant nerf for spellcasters – for 2 whole weeks, which is brutal for a level 7 spell. Wouldn’t allow this one. The pdf then proceeds to provide 4 level 9 spells: Astral suffocation is clever: It lasts for three minutes and uses an astrally-projecting target’s silver cord to try to strangle them. Cool! Long duration keeps it viable, and generally, I like this. However, on a successful save, you’re stunned. Considering that there are more breathless creatures than those that are immune to stunning, this is a bit weird.

Astral tsunami is pretty cool: It’s a wave that causes minor slashing damage (no save) and also banishes targets. It’s cool, very cinematic, like it. Gate mirage hijack’s a planar gate’s destination to a place of your choosing, and covers the gate in an illusion that makes it seem like nothing’s amiss. Nice. Kudos: This gets interaction with gate activation/maintenance right. Planar degradation is two spells in one: Either you make a planar gate an instability (potentially causing the astral scourge template…), or you can get an aura of such instability moving around with you – but at the cost of also being affected by it…The spell is btw. dismissible, but doing so does not rid you of the astral scourge template, if accumulated. In case you were wondering: These spells did make it into Legendary Games’ Mythic Character Codex – with the exception of planar degradation.

Pretty cool, btw.: The author Carlos Cabrera sent me the mythic upgrade for that spell, so here you are!

You can temporarily strengthen the bonds of the planar energies around you, but only within the squares you occupy. You are immune to the spell’s effects for 1 round.

Augmented (3rd): Additional uses of mythic power will provide 1 extra round of immunity.

This issue’s theme is “mystery”, and thus Margherita “Bardess” Tramontano provides a pretty extensive article next, which deals with solving puzzles and riddles, based on the library research rules from Ultimate Intrigue, providing sample tasks for CR 1, CR 5 and CR 11, including research thresholds, etc. Beyond that, we get the prosecutor investigator, who replaces alchemy with inquisitor spellcasting, and altered inspiration, and poison immunity/resistance is replaced with an inquisition, and the archetype gets access to vigilante talents that qualify for Vigilante Casting Savant (Legendary Vigilantes) as investigator talents, as well as the option to take judgments (which also mentions Rogue Genius Games’ Advanced Options: Inquisitors’ Judgments), and we get suggested and prohibited talents, which also mentions Everybody Games’ Unchained Cunning. The rogue talent list available is also expanded. Nicely done engine-tweak here. The oracle gets the enigma mystery, which is a surprisingly cool investigation-themed option that includes rumormonger, favored community, etc. – minor nitpick here: Bonus types would have been appreciated. There are also vigilante options for some magus-dabbling.

The pdf also provides a 5e-article by none other than Brandes Stoddard, which deals with added details based on backgrounds for urban campaigns in particular – the notion introduced here would be assets, which include quick and dirty rules for contacts, as well as multiple background packages regarding places to life, by background. Entertainers could e.g. have a room above the taproom of an inn. This is a very helpful and cool article – really enjoy it!

The pdf closes with a selection of reviews from yours truly.

Editing and formatting are good on a formal and rules language level; layout adheres to the ‘zine’s two-column full-color standard, and the pdf features some nice full-color artwork. The pdf comes fully bookmarked for your convenience.

Wren Roy, Creighton Broadhurst, Dave Paul, Carlos Cabrera, Margherita Tramontano and Brandes Stoddard provide a nice array of different and interesting articles here. They are not all perfect, but you’d be hard-pressed to not get something out of this booklet. Oh, and it’s FREE, which is a serious benefit and means you have 0 reason not to take a look. As such, my final verdict will round up from 4.5 stars.

You can get this magazine for FREE here on OBS!