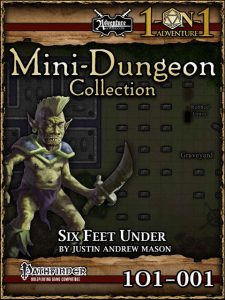 The PC should have a small, sentimental heirloom.

The PC awakes in utter silence, as an amazing read-aloud text catapults the PC straight into the proceedings: All is silent…and it looks like a goblin was just interrupted while robbing a grave. The PC’s grave, for the poor gal/guy has been buried alive – no gear near either and the last several months are just…gone from memory. The adventurer will have different issues, though, for the goblin sets the robbed grave ablaze while fleeing – so it’s climbing out of the grave first! After that, the PC will have to deal with the goblins – probably with a shovel, no less, and the nearby mausoleum contains more of the creatures…and they want the PC’s loot! In case the PC is overtaxed (very likely for less martial or unlucky characters), a night watchman can provide support – but in the end, the PC will be left with a lot of questions…to be continued…

Justin Andrew Mason’s first one-on-one mini-dungeon is certainly not bad – it is a damn awesome way to kick off a campaign and can easily be used in regular contexts for either a whole group or the first character in the game…but at the same time, it does suffer from trying to be universal: Spellcasters may well burn alive before they escape their grave. Similarly, wizards sans spellbooks, clerics sans holy symbols, etc., may well be pretty screwed. This works well for skill/martial characters that do not rely on tools…and should imho specify the like. Such characters can have an amazing time here. The others…not so much. And unfortunately, as much as I love this otherwise, as a reviewer, I have to take that into account. This drags down what would otherwise be an amazing offering – For item-dependent classes, this can be as bad as 2 stars, for the right classes a 5 star+ seal experience, though. I have to take that range into account for my official final verdict and thus, I can’t rate this higher than 3.5 stars, rounded up to 4 for the purpose of this platform.