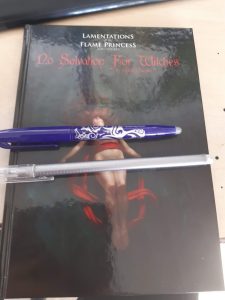 This review was requested by one of my patreon supporters. The review is based on both the hardcover and the pdf.

Before you read this review, please be aware that I assume familiarity with Better Than Any Man, or at least, with my review of the module herein.

Okay, if the strategically-placed pens on my hardcover’s copy are no indicator – this module is abbreviated NSFW. If you read this review on a work computer, don’t click on the links to the uncensored version. The module itself contains drawn nudity, as well as excessive gore and twisted imagery – if you’re easily offended, then this may not be the module for you. The module is VERY deadly, and can end campaigns/irrevocably change them. It can be completed in a single convention slot.

Formally, the book uses LotFP (Lamentations of the Flame Princess) as the OSR-rules employed; NPC/monster stats are printed in red, making them easy to parse. Magic items and spell-references are properly formatted, but it should be noted that spellcasters don’t get a list of spells known per se. A lot of the book’s pages (13 of them) are devoted to the Tract of Teratology, a book with which you can conjure grotesque monstrosities if you’re willing to sacrifice people to do so. These bestow abilities on caster and monster, but in a cool twist, the monsters generally suffer from compulsions and strange restrictions – it’s almost like a small brother to the Random Esoteric Creature Generator, and it does its job pretty well, but I couldn’t help but feel like its presence here was not required – having it elaborated into a full-blown book of its own, and using the page-count in a different way would have probably been better.

The theme of this module, as the introduction notes, is “glibdark” – in short, much like some exploitation flicks, it exaggerates dark themes and taboos to the point where they can become almost funny…but the module is more, at least in my opinion. Still, this “glibdark” aspect bears mentioning: The module, intended for low to mid-level characters (no level range is given) is almost gleeful in its sometimes rather gross descriptions, so whether or not your group can enjoy the like is an important factor to determine whether you’ll like this book.

But in order to elaborate, I need to go into SPOILERS. Potential players should jump ahead to the conclusion.

All right, only referees around? Great! So, please stop me if this sounds familiar: A coven of ladies with witch-like powers has established a place and try to live according to their remarkably progressive ideals. The ladies have unique abilities, and one of them has more powers than the others. Yeah, well, what was one of the factors in Better Than Any Man takes central focus here: The PCs are basically trapped in a huge dome of magical energy that includes two settlements and a priory. The priory is the center of the ritual currently happening, and it can only be accessed by finding some red spheres – all of this is illustrated in pretty neat isometric full-color cartography…which is missing a scale. Super-weird: In spite of the pdf being layered, the maps can’t be made player-friendly – the annoying labels remain. Boo!!

But I digress. The 5 women standing with the main antagonist Orelia Woolcott have taken the names of mythological figures, for they want to enact a dancing ritual to change the world! Orelia has managed to contact a per se benevolent entity called “Primogenitor” – this thing badly understands our primitive world from its multi-dimensional perspective, and thus has a hard time actually doing what the ladies intend it to. Still, the ritual in progress, unless stopped, will destroy the (VERY) unpleasant social order of the 1620s, yearning for ideals that ring as sound to most modern people.

However, in that world and age? With the primogenitor? The consequences will be vast and cataclysmic…but they still may be worth it. The ladies are not classic villains. Nor are the PCs classic heroes. Which brings me back to Better Than Any Man’s reception: That module may be one of the best PWYW-modules I’ve ever run, it may be one of the best adventures in LotFP’s entire library. It was also denounced as a wide variety of things, by people offended by an optional humiliation/BDSM-ish reference, by its dark horror-themes, by not getting the usual adventuring experience. By getting a module that is dark fantasy, and can turn full-blown horror after the PCs ignore LITERALLY their deity warning them away. BTAM was maligned for being too deadly (and yes, it is lethal), for being capricious, and Fuck For Satan took all of these issues and made a review from them. It was a tantrum and a middle finger.

This adventure does something smarter: It makes the reception of Better Than Any Man, the mischaracterizations, exaggerations, rumor-mongering and deliberate misreadings, and wrote them down. Then, the author constructed a satirical module that can be fun, in spite of all these things, well, being deliberately showcased here.

If you think I’m reading too much into this, let me give you a couple of examples.

-There is a village where everyone was slaughtered – a little girl can turn herself inside-out (dragging her e.g. leg through her moth) and turn into a killer creature, which must be dealt with.

-There are PLENTY of cataclysmic ways for your campaign to go off the deep end. One optional encounter has a slime that can cause an ice age. Looking into a peeping hole can end the world/launch a horrible invasion, or have a character die horribly, seemingly vanishing into thin air. All of these campaign-enders are telegraphed in some way, though – the holes? “GAZE NOT” is written above them. The slime? Can be dealt with/is triggered by the PCs.

-The lethality is represented in the finale as well: Rocks *literally* fall, and PCs have the chance to lose limbs on failed saves.

-There is a couple of a man and woman who hate each other, fused together.

-There is LITERALLY a psychotic white knight who wants to kill the PCs if they try to interfere.

-There are nuns giving birth to abominations.

-There is a perverted abbot, who has a mini-harem of ladies LITERALLY commoditized by the weird magics – one of the ladies has a frickin’ cornucopia-like torso, and their limbs have been somewhat switched around. They are grotesque, yet helpful and happy with their lot.

There is NO WAY this is not intentional.

It is the module-version of whacking somebody on the head with a newspaper while yelling “DO YOU GET IT NOW???” Heck, the module actually spells out that Woolcott’s New World Order actually would be GOOD for the PCs. You know, as good as a certain social experiment near Würzburg, destined to be swept away by Carolus Rex, could have been.

This module’s subtext removes all ambiguity; I’d not even call it “subtext” – it’s text. It’s so ridiculous and excessive with its gore and grotesque components, with its OBVIOUS quoting of pretty much everything related to exploitation themes, that it’s very, very hard to play this seriously. It’s possible, but leaning into the grotesque and outrageous is probably the better call.

And yet, the adventure is not per se preachy. You can play it without all of these considerations, and since the ritual’s under a strict timer, gathering the red spheres, entering the priory, and stopping or not stopping the ritual can be covered, easily, within a convention slot or single (long) play-session.

Editing and formatting are top-notch, I noticed no hiccups on a formal or rules-language level. Layout adheres to a two-column standard, and the module provides plenty of grotesque and gory full-color artworks of excellent quality. The isometric full-color cartography is beautiful, but I’d rather have USEFUL cartography. No scales on the maps, no grids, and worse, the maps feature spoilers. The items required to enter the final area of the module actually are visible on the maps. This is particularly jarring in the pdf-version, where the existence of layered pdfs literally means that there’s no excuse for not being able to turn these off. The hardcover sports “NSFW” on the spine, is solid and high-quality – no complaints there. The pdf doesn’t fare as well, unfortunately: The pdf has this weird phenomenon, where the crisp and perfectly clear artworks of the hardcover book seem more low-res and pixilated, have less crisper colors, etc., and the module lacks bookmarks in its electronic version, which makes navigation a pain in the behind.

I like Rafael Chandler’s death/black-metal infused aesthetic, with its pitch-black humor, and this book puts this humor front and center. This can be played as a funhouse parade of grotesqueries, and even without knowing about all the online drama, it is a fun and functional module. It is super-deadly, but it, unlike Fuck For Satan, is not a deliberate screwjob (haha – sorry for the atrocious punnery) – underlying its lethality is a very deliberate “reap what you have sown”-mentality. The PCs will only suffer if the players aren’t smart. This is brutal, but it is no exercise in “Got Ya”-BS – it is fair in its savagery.

Where Better Than Any Man was a relentlessly dark and merciless vision, this is its funnier, goofier brother, is the equivalent of laughing in a slasher-flick. Now, personally, I preferred the other take on the concepts, but No Salvation for Witches does have its place beyond its meta-commentary aspects.

For a campaign starter, for a convention game with the right audience? This can be genuinely funny. “Right audience” being the big factor here.

If you’re easily offended, then this will trigger you to kingdom come, and same goes if you just want your standard fantasy.

But that’s not what LotFP is about. This is one of the few instances, where I’d consider grotesque horror and humor to make for a valid combination.

So, all well? No. The maps prioritizing beauty over utility bother me to no end. No bookmarks? Similarly sucky. And while the Tract of Teratology is a nice tool, it feels pretty useless here – I’d rather have had more module. That being said, unlike Fuck For Satan, this is no somewhat puerile temper-tantrum in module-form; this is, in design and themes, an elegant rebuttal that can be fun to play. It’s not Rafael Chandler’s best work, but it’s a nice module. My final verdict will be 4 stars – for the print version. For the pdf-version, you should think about how important the aforementioned issues are to you, and detract the appropriate number of stars. Personally, I’d rate the pdf on its own at 3 stars.

The hardcover can be found here.