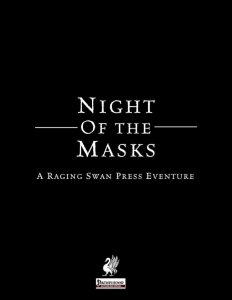 The night itself is structured in 4 phases, which should not constitute spoilers: First the guests arrive, then the nobility, then some politicking is done, and then we have the unmasking; much to my pleasant surprise the order of arriving nobility is presented in detail (that’s important, after all!), and 10 supplemental minor events allow the GM to spice up things easily and without much fuss. The  supplement also includes a couple of rather nice more fleshed out events, which include nobles with uncommon tastes, mask-switcheroos and what may or may not be a case of poisoning. 9 specific guests of interest come with more detailed descriptions, including read-aloud text and a general notion of their alignment, age, gender, race and class + levels, but no actual stats are provided.

…so, all cool and dandy? Well…no. This is, in effect, a system-neutral supplement that eschews doing what makes masquerades hard to run, and I’m pretty sure that this won’t survive contact with most groups. Night of the Masks commits one cardinal sin: It doesn’t account for magic or the rules of the game. So, poison-scenario. “Damn, I cast detect poison!” And there goes your political intrigue.

This issue is particularly egregious in Pathfinder, where we have an entire hardcover devoted to stuff like masks and intrigue. Maybe you’ve heard of it. It’s called Ultimate Intrigue. So no, no social combat stats or the like included, alas. And, you know, I can still kinda get behind that.

But we don’t even get DCs to identify people and see through disguises. And again, yeah, it’s kinda understandable that this isn’t the focus, when every key player is supposed to be easy to identify. But, well, once you insert a switcheroo plot, that sort of thing becomes relevant. In that way, this book pushes all the really hard work, accounting for magic, security measures, decorum, DCs, etc., on the Gm. And for me, that severely limits the appeal of this supplement.

Editing and formatting are very good, I noticed no serious formal hiccups or rules-language issues; the latter primarily due to the grating absence of these elements. Layout adheres to Raging Swan Press’ elegant two-column b/w-standard, and the pdf comes in two versions, one designed for the printer, and one made for screen-use. The pdf is fully bookmarked for your convenience. The player-friendly map is not included in the download.

As a Pathfinder-supplement, though? Even as a rules-lite one, this does fall short, as it fails to account for even the most rudimentary stumbling stones that one can encounter when attempting to run such a scenario in the system. There is no nice way to say this: This is a non-conversion as far as I’m concerned, and I’d have as much work with this, as I’d have with any supplement depicting a masquerade ported from another system.

If you’re here for the flavor, you won’t be disappointed; if you want more, then this’ll leave you disappointed. My final verdict can’t exceed 3 stars.

If you enjoy my reviews, please consider leaving a direct donation via paypal, or joining my patreon.