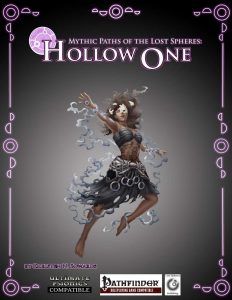 The second mythic path of the lost spheres to have a stand-alone release would be the Hollow One, who gets 3 hit points per tier and is really interesting: One of the base abilities of the path allows you to temporarily assign a negative condition, bad pact (pact magic!), disease of the like and switch it to another creature temporarily. This handling of affliction transfer is pretty tough to get right, and, much like before, the pdf does something smart in that it concisely codifies such terms. I also enjoyed the second of these abilities, which allows you to grant yourself a boon, which scales depending on by how many afflictions you’re affected, capping at tier to prevent abuse. Thirdly, you can use a swift action (SANS mythic power expenditure!) to ignore the detrimental effects of such an affliction. The base abilities already entwine rather well and promise some cool stuff for the path abilities here. The tier 10 option allows you to regain mythic power, allowing you to regain one if affected by two afflictions in a single round.

Among the path abilities, we have access to forlorn feats from that Transcendent 10-installment and a really cool one: Gain Charisma for every curse you suffer from! Similar tricks can be applied to other ability scores, making this a great offering for the angsty, doomed antihero that draws strength from a doomed fate thrust upon him. An aura that renders 1s and 2s automatic failures, ignoring possessions by entities…and the path builds on that: In an AMAZING idea, the path offers the means to tap into the SPs and psi-like abilities of possessing entities! That is frankly glorious! Stealing possessions and curses, leeching off supernatural abilities, gaining sneak attack based on tier versus creatures targeting you with an affliction (should specify that it lasts only for the duration of the affliction), negative energy channeling per affliction borne…or what about making morale or insight bonus granting abilities count as curses? What about reflexive rage or bloodrage? You can tap into the skills of possessing creatures as well. What about delivering poisons that affect you?

At 3rd tier, we have access to an oracle mystery, fast healing contingent on curses borne (not a fan), spreading afflictions in an aura…or, if you’re going for pact magic, bind a spirit OPPOSED to the first one! And that’s only a selection! Gating in an outsider with an opposed alignment that may be heartbound to you is also really cool and rife with roleplaying-potential. Even though I’m not happy with every single aspect of this path, I adore it to bits – this one requires serious system mastery to pull off, but rewards you with as close to playing Many-as-One as I have seen in pen & paper games. Two thumbs up, flavor-wise one of my favorite mythic paths ever.

Editing and formatting on a formal level and rules-language level can be considered to be good, if not perfect, with minor deviations and rough edges here and there; that being said, considering the complexity of the material presented here, the quality of these components is still rather impressive. Layout adheres to a 2-column full-color standard and the pdf sports a nice piece of full-color artwork. The pdf comes fully bookmarked for yoru convenience.

Christen N. Sowards’ Hollow One mythic path requires some system mastery to get the most out of, sure. It’s also rougher around the edges than the godhunter, for example, and may require a bit of oversight and minor tweaking. Formally, this may not be perfect. BUT DAMN, I adore this supplement! I really mean it! Condition transfer, unique mechanics based on afflictions taken, blending of flavor and rules. The possession-mechanics are NOT for every game; no even close. But OH BOY, this guy represents, hands down, my favorite mythic path ever. It’s inspired in the right ways. It is creative, oozes narrative potential, and actually manages to innovate. It is rough, being an earlier release of the company, but oh BOY can it be pure amazing! Now, as a reviewer, I can’t rate this as highly as I’d like to; it is a bit too rough for 5 stars. However, what I can do, is to rate this 4 stars and designate it as one of the few supplements that absolutely are worth spending the time to add a few final polishing flourishes…and add my seal of approval regardless. I love this fellow, and if you enjoyed the ideas noted, check it out!

You can get this slightly rough, but utterly inspired mythic path here on OBS!