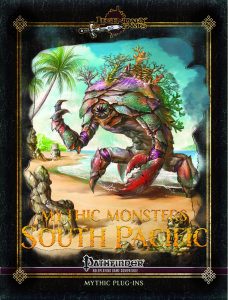 This installment of the Mythic Monsters series begins with supplemental content, here in the shape of a total of 7 different magic items, three of which are magical boomerangs: The ricochet boomerang is obviously returning (like the other two) and allows the wielder to make an attack as a standard action at -2 to atk; if the attack hits, the wielder can select a second target within 10 ft. and may even bounce this way past cover, managing to get the complex verbiage done right. Mythic wielders suffer from less penalties for this type of attack and mythic power can be used to make full attacks with bouncing, allowing you to potentially bypass hard terrain etc. – impressive. The clever boomerang can execute at-range trips and within 30 ft., can be used to feint. In the hands of mythic wielders, the weapon can execute more potent combat maneuvers and use mythic power to snatch disarmed or stolen objects. So cool! The third boomerang would be the bloody boomerang, gaining an extended threat range that causes Constitution damage and bleeding damage that stacks with itself and other sources of bleed damage. The mythic wielder can use mythic power to bestow the keen property for tier rounds, or the wounding property for 2 mythic power uses. Both can be activated at once. The boomerang may also be fired via mythic power as a line-based AoE-attack. LOVE IT!

The pdf also includes the outback woomera, a spear thrower that may be wielded as a magical club in melee, and it makes short spears fired treated as distance or keen, and maximum range is increased as well. Mythic wielders get both properties, and mythic power may be used as a swift action to gain a bonus to atk and ignore cover and concealment and bypass DR, or vastly increase range. Path ability synergy is properly taken into account, and the same holds true for feats. The woomera of a mythic wielder can also produce goodberries and water. The possum-skin cloak fortifies versus the weather and elements, gaining also a bonus to Knowledge (local) and (history) checks due to the ancestor’s influence. The cloak can make for a warm shelter on trees that is hard to notice. Mythic wearers can consult with the ancestors via mythic power and the cloak enhances the surge mechanic. Similarly, the shelter-ability improves. Cool! The final two items would be amulets: The Hei Tiki Amulet fortifies versus fear and emotion effects and helps avoiding being surprised. Mythic wielders can benefit from mage’s faithful hounds or interposing hands, the latter in the shape of tiki masks or idols. Cool! The Hei Matau Amulet nets a luck bonus on saves and helps navigating the waves, greatly enhancing Profession (sailor) and allowing for know direction on the waves as well as limited water walking. If dropped into sea water, it becomes a celestial giant seahorse, a manaia, which is tightly codified and sports unique abilities. Mythic wielders can exert limited control over the waves and gets better interaction with the spirits – really cool. These items are really amazing.

Now, let’s take a look at the monsters, shall we? At CR 1/MR 1, we have a platypus familiar, who gains electrolocation in water, with mythic power upgrading its range temporarily, as wella s the ability to generate a mud cloud. Cool. There also are two marsupials at these CR/MRs – mangaroos and thylacines. Mythic kangaroos get massive leaps as long as they have mythic power and pretty brutal kicks. Thylacines can render a target flat-footed via movement, courtesy of distracting stripes, and they get a serious threat range, with the option to enhance the critical modifier to x3 via mythic power. The final creature at this CR/MR-range would be the lavishly-illustrated orang-pendak, whose backwards feet get proper rules-representation and better object-bursting. Unique and nice one.

There are also two mythic megafaunas – at CR 3/MR 1, the moa, and the CR 8/MR 3 megalania – the former may use mythic power for speed bursts and trample/stampede targets, making them more potent in groups. The megalania is brutal: 1/round, as an immediate action, the critter can expend a mythic power to take a full round’s worth of actions! Resting in sunlight can allow it to regain mythic power and their acidic stomach is particularly nasty.

At CR 4/MR 2, the adaro can create swirling cyclones of water and ride these, and their rain frenzy ability is upgraded. Solid upgrade! The manananggal’s mythic version, at CR 8/MR 3, deserves special mention: It gets the ability to emit deceptive noises, drain mythic power and the incredible flexible, prehensile tongue is a much-desired upgrade the changes how this one runs for the better. Add a mythic power-fueled shroud of shadows, and we have a winner here. Speaking of undead: There is a CR 6/MR 2 mythic penanggalen based on a oracle 5, sure…but the write-up is inspired due to another reason: The book contains a massive mythic template: 10 tiers net progressively cooler abilities. I adore this. Two thumbs up! Speaking of amazing undead: The CR 10/MR 4 mythic polong leaves thin blood coatings that grease the area, get proper bloody possession 8including tell-tale signs), and the mythic polong may attempt to slip the bonds of its limitations..its terrible wounds have also been improved. Glorious upgrade of the base critter!!

The Cr 16/MR 6 papinijuwari comes with a reprint of the mythic Awesome Blow feat, and receives an aura of fecundity. It can also crawl inside of deceased creature’s mouths, leaving a horrid disease behind that renders the corpse into a disgusting biological mine, while also replenishing mythic power. The write-up also provides a nasty pestilence form…inspired. At CR 12/MR 5, the kapre’s smoke can be made to last longer via mythic use expenditure. The mythic version also gets a massive debuffing aura that enhances flanking, interacting with confounding aura. 1/day spewing embers and better invisibility, a boost when almost defeated and the ability to grant a limited wish make this version of the creature infinitely cooler than the original. Huge plus! At the same CR/MR, the tiberolith’s corrosive strikes kickin MUCH sooner (thankfully!) and gets Power Attack, in spite of being mindless. The rudimentary clockworks of the construct net bonus feats and +2 to AC, as well as allowing mythic characters to imbue power within. It can also trap spells and discharge them. Damn cool and potentially, super lethal!

At CR 11/MR 4, we also get a coral golem’s mythic iteration, which reconstructs itself in water. Its attacks can infest targets with coral, and the entity can expend mythic power to break off parts of its body to generate healing powder. Very cool!

Speaking of “very cool” – At CR 5/MR 2, the new creature within these pages would be the Tiddalik – a Medium, bipedal magical beast that somewhat resembles a frog: The creature can absorb the liquids of those grappled, and absorb vast amounts of water – enough, and it actually assumes a giant form of sorts! Yes, stat mods provided! Super cool and oozing flair: bringing these guys to laugh can result in devastating expulsions of tidal water! I love this critter!

Editing and formatting are top-notch on a formal and rules-language level. Layout adheres to legendary Games’ two-column full-color standard, with a mixture of new and old full-color artworks – the one-page version of the cover artwork in particular is amazing. The pdf comes fully bookmarked for your convenience.

Alex Riggs, Mike Welham and Jason Nelson have done it – this installment of Mythic Monsters is genius. From the cool and unique items to the critters: Animals make sense and feel plausible; undead are icky and tap into taboos and anxieties; constructs feel effective and magical beings feel magical, improving vastly upon the base creatures in a wide variety of ways. This is a superior supplement in every way, even within the context of the high quality Mythic Monsters-series. This is a 5 star + seal of approval gem. You should definitely get this – it does vastly enhance the rich lore and concepts of the base creatures. One of the best installments in the series!!

You can get this superb book here on OBS!