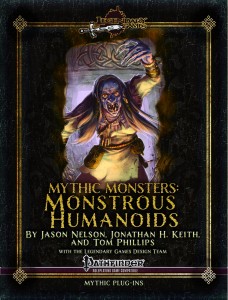 As always with the Mythic Monster-series, we begin this installment with a unique piece of supplemental content, this time around, a template to create tauric creatures at CR +1, including a condensed mice-statblock of a Gworg (goblin-worg-hybrid) and an improved, mythic version of the template.

But you’re here for the monsters, so what do we get? Well, the first in the ring would be the mythic Adaro at CR 4/MR 1 – who receive increased powers while fighting in the rain, rendering the base rain frenzy ability much more volatile. Nice one!

At CR 4/MR 1, mythic centaurs receive pounding kick as a bonus feat useable a limited amount of time per day, also tied in with mythic power etc. All in all, solid, but also not particularly awesome.

Mythic doppelgangers clock in at CR 4/MR 2 and receive one glorious ability – when changing into a target’s shape, they have a chance to duplicate said target’s spellcasting capacities and steal the spells of the target via mythic power. Additionally, the traditional “No, I’m the real one!”-trope now also has a mechanical representation with the moment of doubt-ability. Two thumbs up for these guys!

One the lowest end of the spectrum, CR 2/MR 1 mongrelmen can use their mythic power to makes targets contract their warping curse and, in a pretty ingenious way, they can adapt their bodies to provide unique benefits to them.

CR 5/MR 2 serpentfolk receive particularly potent suggestions, powerful venom and increased capacity for spellcasting disruption – all in all, nice, but not particularly glorious. At the same CR/MR, mythic yetis receive rock throwing, applying its cold to the projectiles, increased snow-stealth an fatigue-inducing rends. Once again, one of the creatures with a nice combo-potential.

CR 7/MR 3 Mythic Annis Hags deserves special mention. Why? Because it takes an arguably rather bland hag and turns her into a rending, frightening (both to players and PCs) adversary that can shred apart PCs unfortunate enough to fall into her deadly grip – the interaction of new signature abilities and the combo-potential they provide are pretty glorious! At +1 CR, mythic Winter Hags can permanently blind non-mythic foes with their breath, use mythic power to blast foes with retaliatory cold and increased coven magic – all in all, solid, but not 100% as nice as the annis.

Mythic Buggane clock in at CR 6/MR 2 and may pass unhindered through stone and earth, receive a deadly rend that can pulverize foes – non-mythic foes run the very real risk of being coup-de-grace’d by the rend! A slight issue has crept in: I am not sure whether this rending coup-de-grace requires the adversary to become helpless first or not – the ability fails to specify, though not requiring the helpless condition would make more sense. At the same CR/MR, mythic derhii receive a pounce-like charge that can be enhanced via mythic power to render foes prone and dazed. The mythic version also adds a focus on two-handed weapons to the creatures, offering chances to knock target creatures out with crits and making lunging sweeps, somewhat akin to a reach-increasing vital strike. Nice!

At CR 9/MR 4 mythic Pukwudgies may redirect quills with which they’ve missed in the last round, execute quill-based counterstrikes if missed by opponents and penalize foes poisoned via sneak attacks – once again, cool build! At one MR less, mythic Stygria can create shards of crystal that can be animated as crysmals – nastier even – creatures calcified by their curse can be transformed into caryatid columns – talk about adding insult to injury! Nice!

Now each Mythic Monster-installment also sports a new creature, with massive background, story-hooks etc., which coincidentally, more often than not, constitute the hghlight of the book. At CR 13/MR 5, the new creature herein would be the Xotenga, providing one higher-level threat for this installment. So what are they? Creatures of dust, harbingers of disaster, these gaunt humanoids with their molting-vulture-like look are simply despicable – embodiments of famine, they cannot eat. Instead, they draw sustenance and nourishment from the very famine they cause with their auras and seeking, deadly, spell-like ability-projecting quills. Have I mentioned the reflexive, deadly quill-swarms and the ability to dual attack and drag target creatures. This creature is GLORIOUS and made me wish we got a full bestiaries of creatures with this level of detail – the extensive ecology just helps drive home the utter coolness of these vile creatures.

Editing and formatting are very good, I noticed no significant glitches. Layout adheres to legendary Games’ 2-column full-color standard and the pdf’s 2 original artworks are gorgeous. The pdf has a linked ToC, but no bookmarks, which constitutes a minor downside regarding comfort-factor.

Jason Nelson, Tom Philips and Jonathan H. Keith deliver a cool installment of the mythic monsters series, with especially the new creature just downright blowing my socks off. Monstrous humanoids are tricky creatures to design – unlike magical beasts, their abilities not only have to represent utility, they should also provide an interesting potential that reflects how sentient beings would benefit from developing the abilities. While remaining distinctly magical. This is harder than it sounds on paper and yes, not all humanoids herein are downright awesome. However, quite a few of them are – from the annis to the pukwudgie and strygia, there are some downright glorious examples of design here…but also some that fell a bit flat in comparison. I’d hence usually settle on a final verdict of 4 stars – but there *is* the spark of awesomeness AND the superb new creature – which suffice for an upgrade in my book. My final verdict will hence clock in at 4.5 stars, rounded up to 5 for the purpose of this platform.

You can get these nice mythic adversaries here on OBS and here on d20pfsrd.com’s shop.