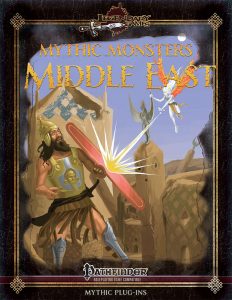 This installment of Legendary Games‘ Mythic Monster-series (which has revolutionalized how I use bosses in non-mythic games, but that as an aside) clocks in at 28 pages, 1 page front cover, 1 page inside of front cover, 1 page editorial, 1 page ToC, 1 page SRD, 2 pages of introduction, 2 pages of advertisement, 1 page inside of back cover, 1 page back cover, leaving us with 17 pages of content – it should be noted, though, that like in all LG-books, there is A TON of text on each page, so the simple page numbers may be misleading.

Anyways, we begin this installment, as all of them, with supplemental material – and this time around, we get awesomeness. Not only do we start with duststorms, sandstorms and flensing sandstorms, with proper rules, we also get three complex hazards: The CR 10 deadly dunes are racing dunes that behave somewhat like swarms –though they are merciless and unfeeling as nature is wont to be; Shadow sand can add a whole new level to the desert sans suffused with dark powers, leeching both light and life from those that traverse it: “And lo! Deep within the fabled dunes of yore, there lies the black wasteland, where the living dead wander freely on grains of black under the dimmed sun, where ruins loom and the master’s black pyramid rises…” Sorry, couldn’t help myself. Beyond those, we have a nice call-back to the classic “Desert of Desolation” boxed set, with the glassy sea as a new terrain that not only causes extreme heat – crystal crevasses and razor-sharp glass make navigating these parts wondrous and deadly. A fantastic lead-in for the subject matter, so let’s see whether this installment’s monsters hold up!

We begin with a classic, the formerly psionic, green unicorn-bunny creature called Almiraj, which in Pathfinder may have lost its psionics…but in its CR 1/MR 1-version, it does hearken closer to the mythology, gaining a petrifying gore as well as the option to devour targets whole. And yes, it has a weakness as well. Amazing rendition of the critter! The juvenile Rukh, at CR 4/MR 1 is slightly less interesting in comparison, but we also get an adult iteration at CR 12/MR 5, which exudes necrotic energy as a desecrate aura – and woe to those that slay these gigantic two-headed vultures…all that energy must go somewhere…

On the lower end of the CR spectrum, we can also find one of the Div, the Doru, at CR 3/MR 1, who can use mythic power to duplicate legend lore and pronounce curses of misfortune, making the pretty bland standard creature rather exciting…we need the information…do we risk the curse? CR 5/MR 2 nets us the second div, the Aghash can bypass protection from evil with mythic power, for a better gaze; they can also AoO-less dimension door through the sandstorms they cause. Oh, and disfiguring touch that also adds potential control over victims. OUCH. The third div herein would be the CR 8/MR 3 Pairaka makes targets affected by plagues or the lustful dreams it inspires more susceptible…and, in a pretty cool detection-avoidance stunt, it can freely adjust its alignment.

The mythic version of the mighty Dybbuk clocks in at CR 18/MR 7 can become dormant upon possessing a target, evading detection and potent magics to expel it, while camouflaging its presence. It can, while unseen, demoralize targets with whispers and their touch can substitute 2d4 rounds of stun when using mythic power, instead of the usual damage. Malevolence is upgraded as well and mythic dybbuks can spread their essence between multiple objects…oh, and they can control constructs and mindless undead. And their aura can paralyze targets. Really, really nasty power-beyond-throne/infiltrator/killer/-type of monster! The Owb, at CR 7/MR 3, is cloaked in cold that damages those nearby; it can also implant suggestions and provide a boon to an ally with mythic power. The Girtablilu, at CR 10/MR 4 can clairaudience/voyance with a radius of 1 mile, and even share this via mythic power; they can also gate via mythic power. Oh. And there’s this small thing in line with mythology. The gaze. Which causes slay living. Oh yes. Your PCs will suffer.

In the higher CR/MR-echelons, we can find the CR 17/MR 7 Peri…and it actually is in line with the full scope of mythology; imbued by the blood of a dying martyr, they get constant freedom of movement. It may be shared with mythic power or Constitution damage; the peri has taken the breath of a maiden, who willingly succumbed to disease to be with her lover, rendering her immune to disease – once more, this can be shared. As former shepherds of disasters, they can invoke deadly SPs, which may be upgraded to mythic versions. The past still haunts them, making them never count as good, in spite of their alignment. Complaint: The purifying flames ability mentions being half holy – a damage-type that does not exist in Pathfinder. In their quest for redemption, they have taken on the tear of an old man, who saw the error of his ways, gaining constant heroism…All in all, amazing narratives via abilities, but the holy damage-reference annoyed me slightly. At this point in time, every designer out there should know about that one.

Anyways, there are two other really mighty creatures herein: Ar CR 22/MR 9, the Taniniver may expend mythic power to exude a cloud of Strength-draining miasma and crits with claws add massive penalties to resist the deadly disease these carry. They can use mythic power to bypass disease-immunity or substitute regular diseases with deadly taniniveri spoil. And yes, the diseases carried are much more virulent and potent…OUCH. Another mega-potent creature herein would be mighty Humbaba, at CR 23/MR 9, who can use mythic power to reduce damage from a single source to 45, also boosting its DR/epic in the process. They can also generate a veil with a fascination effect; nonmythic creatures suffer from automatically-confirmed crits at maximum damage; for mythic power expenditure, that may also be used versus mythic targets. The gaze of the Humbaba can ground flyers and it gets perfect awareness of its territory…and, the entity can generate flight-less wings for wing attacks. Ouch.

Now, as always, we also get a new creature, the Buraq, which uses Mythic Wind Stance in the build, reproduced for your convenience here. The creature gets CR 11/MR 4 and is actually good – the kind Buraq can ride impossible distances across the night sky with its rider, as if by shadow walk. This lasts until landing or sunrise. The buraq gets powerful trample and silver hooves; buraqs don’t need food and can live on the benevolence of others. Their gorgeous tail can cause fascination and with mythic power, the buraq can use prismatic spray. On the back of buraqs, time holds no meaning – time ceases to flow, allowing the buraq to save those mortally wounded or grant them a respite from certain doom. We get a full, flavorful write-up of these creatures, including ecology etc., and their full-color artwork is really nice. Very flavorful critter!

Editing and formatting are very good on both a formal and rules-language level. Layout adheres to a two-column full-color standard and the pdf sports 3 neat full-color artworks I haven’t seen before, two of which are full-page artworks that you can use as a handout of sorts. The pdf comes fully bookmarked for your convenience.

Loren Sieg, Victoria Jaczko and Jason Nelson deliver big time here; it is obvious that the authors researched the myths and dove deep into the concepts to make the creatures more unique. The peri, apart from the minor holy damage glitch, would be one instance where you frankly can’t emphasize enough how cool this rendition is in comparison to the regular peri. Similarly, the design-paradigms employed make sense – divs focus on their themes; magical beasts are effective; undead more frightening. The design is excellent and makes the critters stand out, tapping into real world myths, the Arabian Nights, and beyond, to enhance creatures in a rather glorious manner. In spite of the smaller hiccup, pretty much everything is amazing in this book; this is an excellent example of why I love this series. My final verdict is 5 stars + seal of approval.

You can get these inspired monsters here on OBS!