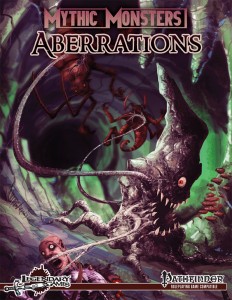 We begin this mythic monster-installment with a glorious handout/moodsetting piece, wherein the dread effects of the new aberration herein are made apparent to the reader – provided in classic greenish/white paper, folks old enough to remember a world sans internet *WILL* definitely have an added piece of recognition drive home the horror here for a pulpy nod – nice indeed and a cool feat by the layout artists/graphic designers of this pdf.

On the supplemental side of things, we receive more mythified spells taken from the Gothic AP- plugin-series, providing, among others, some spells of the Mutant Manifesto with mythic versions – nice! But you’re not here for the supplemental content, but for the creatures, right? Okay, so let’s dive in!

At CR 3/MR 1, the mythic choker can smother targets and makes spellcasting (or calling for help) nigh impossible for its victims – yes, there is a reason the guards are soundlessly vanishing one by one… At one CR higher, mythic ettercaps receive razor-edged webs with a 1-minute cool-down – pretty cool. Also at CR 4/MR 1, mythic rust monsters can use mythic power to enforce two rolls, the target creature/item taking the lesser. Per se solid, but still wished it received some cool tool – rust auras or the like, for example. Also at this CR/MR, vampirirc mists can envelop and paralyze creatures and quickly drain targets of their blood – imho more interesting than the base creatures, so yeah – cool!

In the solid middle-field, at CR 6/MR 2, mythic cloakers receive no less than 5 different ways with which to augment their moan, mythic power-style. Their engulfing is also pretty lethal, but still – perhaps because I’m a fan of the race, I would have loved to see something more unique being done here. At one CR less, mythic mimics can envelop targets and receive acidic adhesive – solid, but not too great. Mythic otyughs at the same CR/MR can disgust those constricted and use mythic power to exhale stinking clouds – which is in line with the creature’s concept, yes, but perhaps due to Purple Duck Games’ Otyughnomicon-series, I expected something slightly more interesting.

One of my favorite, odd creatures, the Wolf-in-sheep’s-clothing at CR 10/MR 4 can using LIVING creatures as lure. Yes, if you know how these guys works, that’s as messed up as it sounds. They also receive a more pronounced body horror component with better implantation options for their eggs and the option to easily maintain multiple grapples, rendering this creature particularly impressive.

Among the high-level threat, we have the froghemoth (yeah!), who doubles as a mythic alien for the subtype, see MM: Aliens) with 2 supplemental feats from MM: Sea Monsters, thankfully reprinted for your convenience – kudos! Oh, and the creature’s build is a true beauty – tossing tentacles, drowning gullet, powerful dragging tongue – worthy of CR 16/MR 6 indeed! At only one CR less, the iconic mythic ropers can shatter weapons that strike them, are masters of pulling creatures around, can paralyze foes with their strands courtesy of mythic power and their glare can rip magic asunder akin to an antimagic field. Glorious! Speaking of which – at CR 17/MR 7, veiled masters definitely earn their title here – beyond doubling as mythos-creatures, they may consume memories, wield delayed enchantment effects, exude mists of their dread mucus, create tangible illusions and even send forth deadly electricity-damage-dealing thoughtlances that can stun and stagger targets. Heck yes!

At the same CR/MR-rating, mythic Vemerak receive a breath weapon upgrade that lasts longer, an aura of madness…and a nasty trick. If the creature begins its round grappling a non-mythic creature of size large or lower, it can immediately bite off the head of the target. Yep. Insta-kill. Don’t send your cohorts against these guys!

Okay, ready for the new creature? Well, this time, the being clocks in at CR 12/MR 5 and is called Zyoselak – so get this: These things are alien, aberrant swarms of gelatinous, acidic matter, able to create telekinetic shields at the cost of decreased movements – however, said shields can be animated when separated from the creature via mythic power. Worse, it can control its transparency and invade creatures, slowly melting their brain, paralyzing targets and quickly consume any targets that die within it. A fearsome, cool and deadly predator and well worth of Legendary Games’ tradition of providing glorious new beasts in this series!

Alistair Rigg, Jason Nelson and Tom Philips deliver a cool assortment of mythic adversaries herein – though this time around, the selection feels more divided to me than in the last installment: On the one hand, we have quite a few aberrations brimming with glorious combo-potential, with enhanced, iconic capabilities and some of the most interesting builds in the series. On the other hand, a few of the creatures herein also felt downright disappointing to me – perhaps it’s due to my well-documented love for the horrific and weird, but when e.g. taking a look at cloakers etc., they did feel like missed opportunities, especially seeing how 3.X did provided some cool variants and upgrades that could have used some acknowledgment or upgrade, if only to make the poor PFRPG-cloakers more unique.

Now rest assured that I’m complaining at a high level here – the cool prose and unique, new monster definitely make for glorious, inspiring additions to any game. That being said, they are not enough, at least not for me, to elevate this Mythic Monster-installment to absolute apex-levels – hence my final verdict will “only” clock in at 4.5 stars, rounded up to 5 for the purpose of this platform.

You can get these nasty aberrations here on OBS and here on d20pfsrd.com’s shop!